In the 1950s and 1960s, if you were fishing for cod around Newfoundland and Labrador you might get a little crabby if a nuisance snow crab, also called queen crab, was tangled up in your gillnet.

Due to the significance of the fishery, it is important to understand as much about snow crab as possible.

Dr. Darrell Mullowney has worked with the Department of Fisheries and Oceans for 15 years and today he heads the snow crab research program in N.L.

Sometimes he thinks that snow crab doesn’t get its due.

“Here in Newfoundland, despite having what was once the world’s biggest snow crab fisheries, Newfoundlanders revere cod. I guess we’ve never had a romance with snow crab in the way that we’ve had with finfish.”

Cod has a long history in N.L. and the snow crab industry is a baby by comparison. The first snow crab business in Canada didn’t start until 1965 and it wasn’t until the late 1970s – early 1980s that a significant snow crab fishery emerged.

The largest consumer of snow crab is the United States, where you can order Newfoundland crab legs off menus across the country. The second largest consumer is Japan. With the groundfish moratorium in 1992, the shrimp and snow crab fisheries increased and become incredibly lucrative.

“The fishery targets only the largest males and most of the population is left in the water and not touched by the fishery at all. The ultimate regulation in snow crab management is to use large mesh in the pots, which leaves all females in the water.” 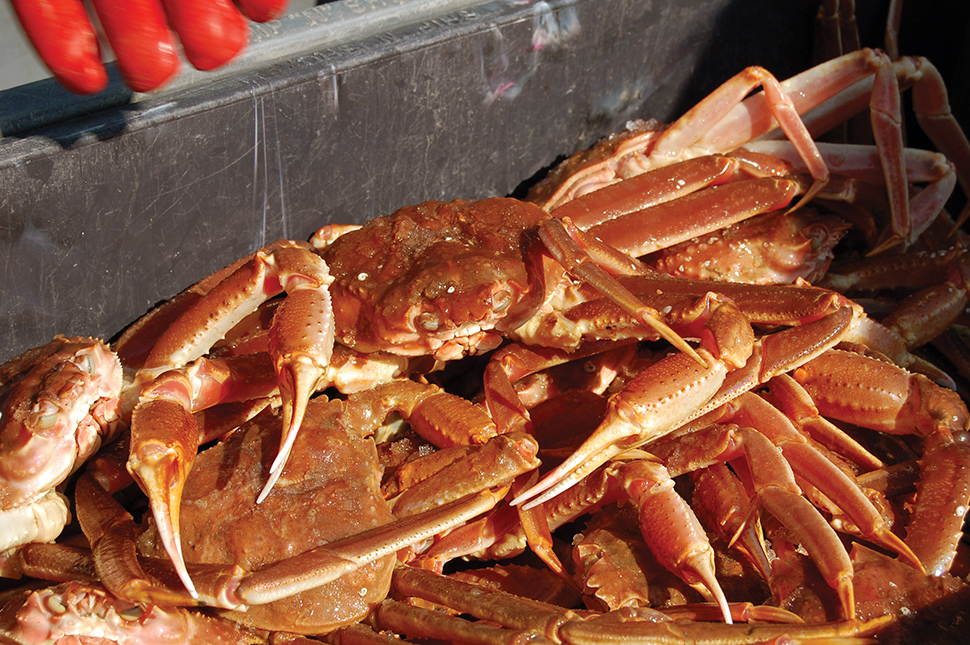 Despite being a lucrative fishery, snow crab exploitable biomass, which is the total weight of large adult males, has declined by 80 per cent since 2013.

“Things are as bad as we’ve seen them.”

Mullowney describes it as, “a typical three-headed beast when dealing in marine biology. You have the environment, predation and fisheries, which together all explain the decline of snow crab.”

First, thinking about the environment, Mullowney says, “The warming climate seems to have an unfavorable effect for the early life survival of these crab.”

Secondly, the small to mid-size crabs are just appetizers for cod, wolffish and skate. “Big fish, small crab. You need a big mouth to take on an intermediate sized crab,” says Mullowney. “When crab becomes full size, they’re virtually immune to predation. We have seen that per capita consumption of crab by finfish has increased in recent years.”

The last head on this beast, is the fishery, which removed just under 35,000 tonnes of snow crab last year.

While the department is working to better understand changing ocean conditions and is transitioning to an ecosystem approach to science, right now, changes to fishery quotas is one of the few levers management can pull to safeguard the stock.

With the results of the most recent snow crab stock assessment announced in February 2017, Mullowney says, “It’s a tough socio-economic situation and the reactions have been good, bad and ugly.” He says there was anger, while others thanked them for the news despite it being bad, and there were others who knew it was coming.

“We’ve been talking about the decline in shellfish for at least four or five years, and because of this, there were a lot of people prepared for it.”

DFO Science has been collecting snow crab information from offshore trawl surveys since 1995. “So, in the last two and a half decades, our exploitable biomass, which is the biggest males targeted by the fishery, was at its lowest observed level last year.”

“Further, our pre-recruit biomass, which is the number of intermediate-sized crabs that we think will grow into the fishery and contribute over the next two or three years, was at its lowest observed level in 2017 and our fishery catch rates were at or near their lowest observed levels in all our NAFO divisions.”

Mullowney has two things he would like fishermen to keep in mind about trends in the snow crab fishery data.

“The fishery trends follow the surveys. We go out and measure things in our surveys and then the effect in the fishery happens in the next year or two, and it’s a tight correlation and statistically, it’s very good.”

The second thing to remember is that, “Small crab are not necessarily going to get bigger and enter the fishery.” Like people, they grow while they’re young and once they reach adulthood, they stop. That’s called terminal molt, when a snow crab has reached its full-grown size.

“A snow crab is a small animal and even many males don’t grow large enough to make it into the fishery. We solely use large mesh pots to intentionally leave most of the population behind. And, the part that’s left behind is very important to reproduction. Like many fishermen have been telling us, we also see a lot small crab remaining in the water. The problem is that all our data is telling us that most of those small crab are terminally molted, meaning they’re not going to make it to the fishery.” 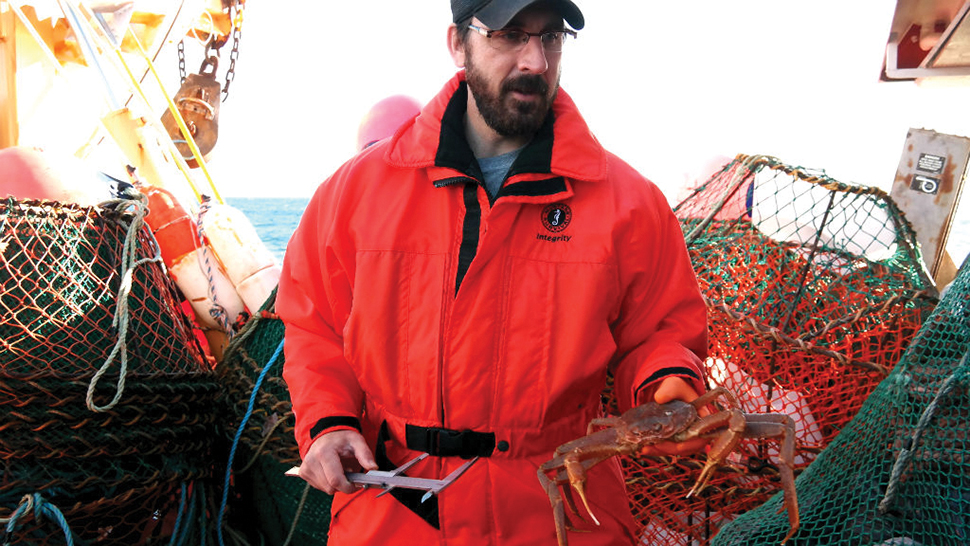 One of the most interesting things about snow crab is that they move much more than we’ve ever given them credit for. Mullowney recently conducted offshore studies and has just published a paper about his discovery in a journal called Reviews in Fish Biology and Fisheries.

“In Newfoundland, we really didn’t know. We analyzed offshore crab for the first time last year and found they travel 60 to 70 km on average from birth to where the fishery captures them, but some move over 100 km. So how much they actually move along our shelves is interesting.”

We know that snow crab can go the distance and so does the team that works with Mullowney.

“There’s a dedicated team of technicians in the shop who are on the boats slugging it out the best part of the year. With the exception of the heart of the winter, we’re out on the water,” says Mullowney. “We’ve had growth in our section lately and brought in new biologists and research scientists who are contributing immensely to our team. We’re surveying more grounds than ever and making big leaps forward in modelling many of our datasets and improving our understanding of what the data is telling us.”

The Survival and Patience of Job - Part IV

Search and Rescue Lifeboat Station to be Based in Old Perlican

No Replies to "Snow Crab: The Claws Tell the Story"