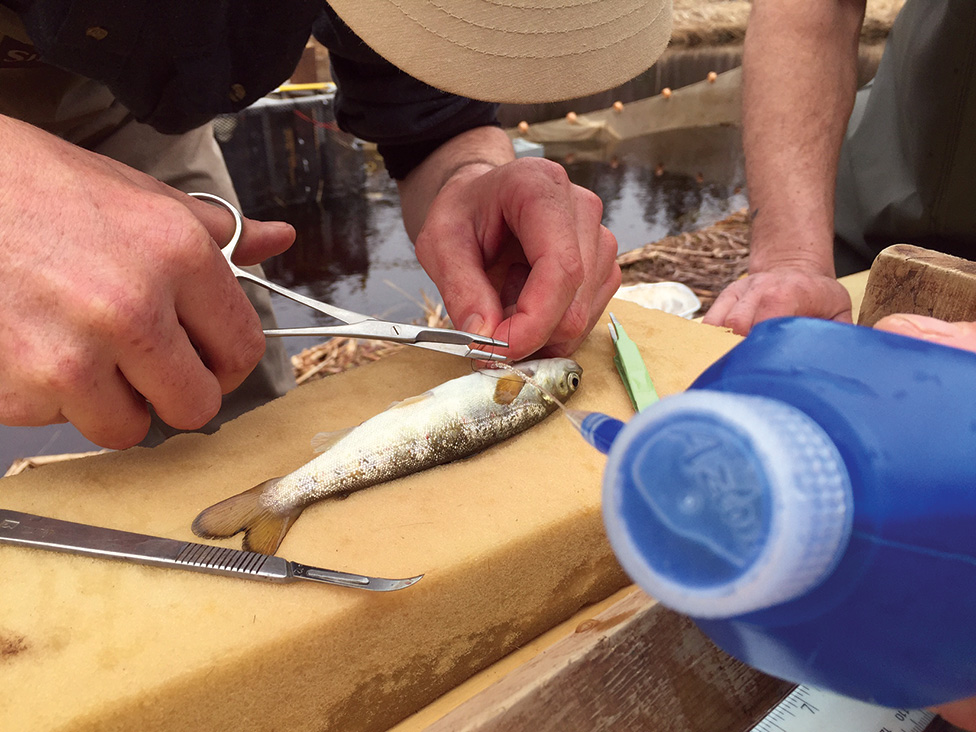 There’s something very old and potentially unique swimming around some of the rivers in eastern Prince Edward Island.

This is why Scott Roloson, a PhD candidate with the Canadian Rivers Institute at the University of Prince Edward Island, found himself hip-deep in North Lake Creek, collecting salmon smolts, earlier this spring.

Roloson and a number of colleagues, including a few from the local First Nation community, were collecting and acoustically tagging the juvenile fish as they made their way downstream towards the Gulf of St. Lawrence. 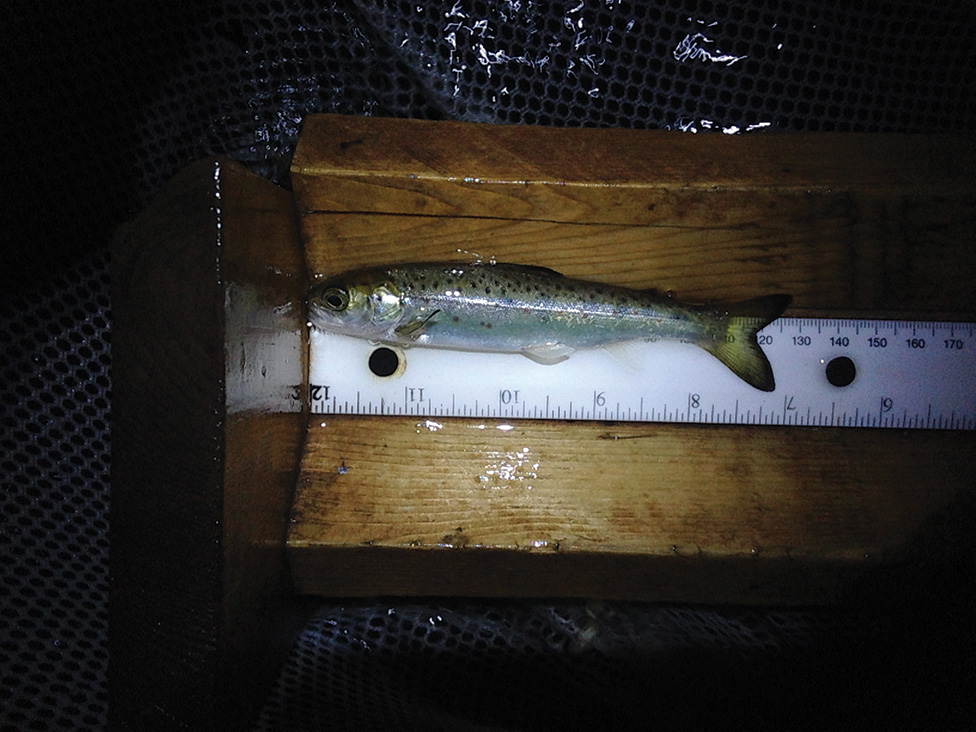 A juvenile salmon being measured.

The tags were designed to ping strategically placed monitoring stations at various points in the Gulf, allowing scientists to track the movements of the fish, if only for a limited time.

“(We’re) just trying to, A: build a better understanding of the salmon in these rivers, and B: to use these salmon as a vehicle to educate and engage with the public about the importance of Atlantic salmon and what they represent in terms of healthy watersheds,” Roloson explained.

That understanding has recently become all the more important because scientists have revealed that some of the salmon frequenting rivers in eastern P.E.I. carry a unique strain of DNA.

Fred Cheverie, coordinator for the Souris and Area Branch of the P.E.I. Wildlife Federation, has been a life-long conservationist and has spent years working with his watershed to improve local waterways. The Town of Souris sits at the eastern most tip of P.E.I.

In 2012, the provincial fish and wildlife office approached Cheverie’s group with a request for help cataloguing DNA samples from two waterways in their coverage areas. The project was Atlantic Canada-wide and involved several rivers from P.E.I., but the two local waterways they were asked to collect from were North Lake Creek and Cross River.

That summer a group of volunteers electro-fished the areas and took a number of fin-clippings from specimens in each river.

All the samples were sent to Laval University, in Quebec, for study but it wasn’t until a few years later, in 2014, that watershed group received the preliminary results of the massive study.

What they found surprised everyone. 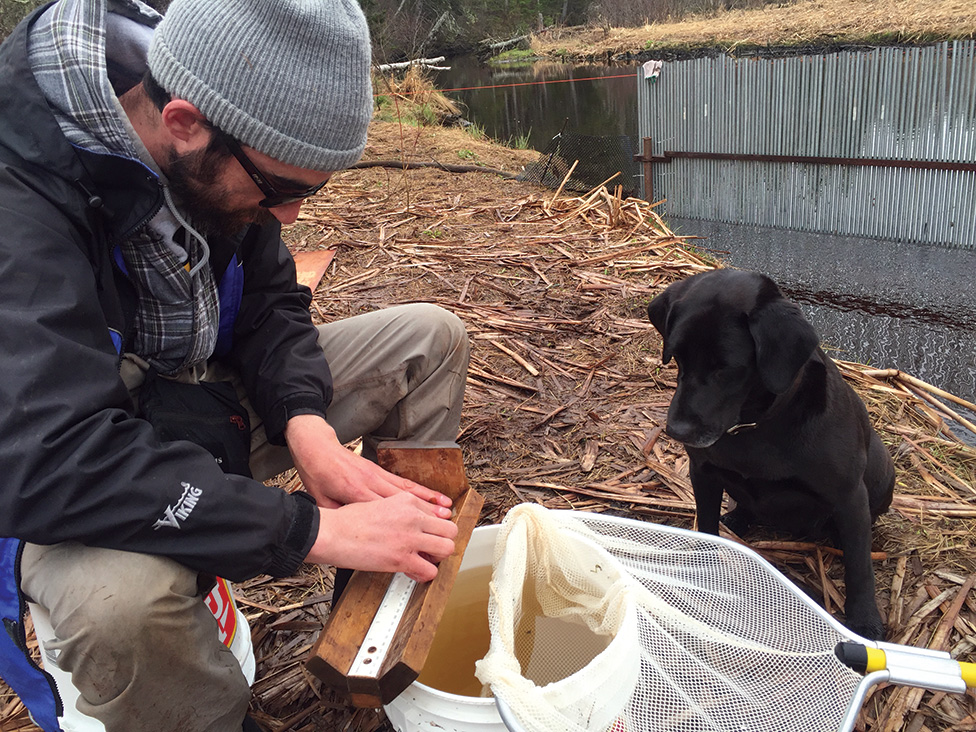 Scott Roloson, a PhD candidate with the Canadian Rivers Institute at the University of Prince Edward Island, works to measure and tag a salmon smolt during a tagging project in the Souris area earlier this year.

“Basically it showed all the rivers in Atlantic Canada all clustered very closely together (genetically), but there was two prongs that stuck out in the Gulf area that were totally different — and that was North Lake and Cross River,” said Cheverie.

“They seemed to be genetically unique and it was stated in that paper that they were possibly ancestral.”

“Ancestral” meaning that they could be original local stock, unchanged from prior to human settlement in the area.

It was an exciting moment for all the volunteers and scientists who put work into the project, said Cheverie.

“At first you say ‘wow, we’re different.’ Isn’t it always nice to be different? So definitely yes, it was a delightful surprise,” he said.

The watershed group had suspected the salmon in their area were a little different.

Salmon who come back to spawn in the North Eastern part of P.E.I. usually do so in late October to early December, which is months later than in other regional rivers, which traditionally see salmon between June and early August. 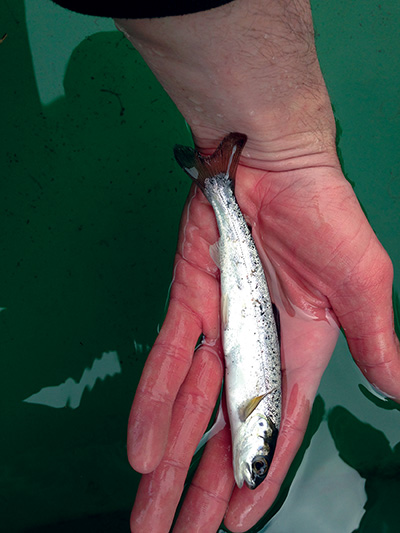 More than two dozen salmon smolts were tagged as they made their way down river.

The watershed group suspect the difference may have something to do with stock used to help repopulate many rivers in the region.

There is little to no history of the rivers in Cheverie’s area being stocked with hand-reared salmon. So while other P.E.I. rivers were being augmented with genetic stock from popular fishing areas, like the Miramichi River in New Brunswick, places like North Lake and Cross River were left to fend for themselves.

That isolation may have been this unique DNA pool’s saving grace, said Cheverie.

“I think we’re so far behind we’re actually ahead,” he said.

The area in question is also relatively pristine, as it lacks the heavy agriculture of other parts of P.E.I. and has much of its traditional forest cover intact.

“These rivers most closely resemble what P.E.I. would have looked like 400 to 500 years ago. North Lake Creek is somewhere over 80 per cent forested… so the inputs and impacts of human activity are on a lower degree of magnitude than anywhere else in the province,” said Roloson.

Finding out they had something special swimming in their rivers was a really profound moment for the local watershed volunteers, said Cheverie and their desire to protect this local feature was doubled.

The first step in securing that protection is increasing their understanding of the local salmon population, he added, which is where Roloson and his work come in.

Over the next months and years, they will be investing a great deal of effort into building their knowledge base of North Lake Creek, Cross River and other local streams, all in an effort to understand where this unique strain of DNA came from and what its presence means for the local  ecosystem.

“As you find out more, it just opens more doors,”  Cheverie said.

“Most other research on Atlantic salmon in Atlantic Canada has taken place on your larger rivers — Miramichi being one. These rivers have had a lot of dollars and a lot of research so we know pretty well what’s going on. But a lot of our smaller rivers in most provinces there’s little or no research in those areas — maybe the contributions of those rivers is much greater than we think,” he said.

“So this opens up a whole new area of exploration as far as we’re concerned. The sky’s the limit I guess.”

If they can answer some of those fundamental questions, it’s possible the watershed group could qualify for special funding to do their research and the local rivers could be eligible for more stringent protection.

“One potential outcome is that we find more salmon rivers that might reflect this (DNA), or maybe we don’t. Either way those findings are critical to how we go forward in managing or directing future research,” said Roloson.

The idea of seeing the rivers he and so many others have worked so hard to protect become something truly special is a comforting thought, Cheverie said.

“I’m 66-years-of-age and I’ve had a passion for the environment all my life. I was a school teacher for 31 years… and whenever you clean streams, you get the fish passing, you see the fish spawning and you see improvement in your area — I don’t know, it’s like teaching a kid and all of a sudden the light comes on and they excel and get good marks.

“You get self satisfaction out of accomplishment,” he said.

Anyone who would like to keep track of the Souris and Area Wildlife Branch of the P.E.I. Wildlife Federation’s efforts to protect this potentially unique strain of Atlantic salmon can see updates on its website at www.souriswl.com and its Facebook page at www.facebook.com/SourisWildlife.

No Replies to "Standing Out"