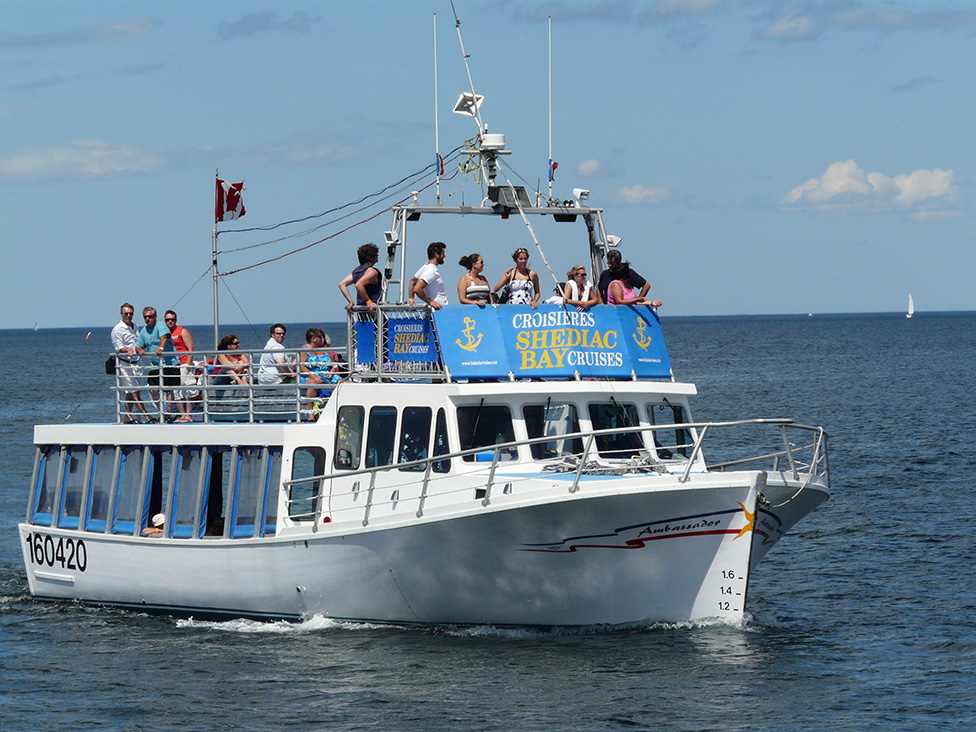 Still on the Water

For three decades Ron Cormier sailed the waters in a 43-foot lobster boat making his living as a lobster fisherman.

He pulled his traps, season after season, working hard to provide for his family even during the years when catches and prices were low.

But these days, rather than fishing crustaceans, Cormier is teaching tourists from all over the world about it through his business, Shediac Bay Cruises and Lobster Tales.

Cormier now sails the water in a 56-foot cruise boat. It’s longer and wider than his fishing boat and has an upper deck. Instead of carrying traps and crates full of lobsters, it carries passengers wanting to learn about the life of a lobster.

During the two-and-half hour cruise that runs four times a day, seven days a week from June to mid-October from the Pointe-de-Chene wharf, Cormier or one of the experienced guides shares their knowledge of lobsters in an entertaining, sometime humorous way.

“We tell the A to Z story of a lobster, how it eats, what it eats. How to tell if it is a left or right-handed lobster. Many people don’t know that. It’s not a legend and it’s not a myth. It does exist,” said Cormier. “We get the passengers engaged by helping pull the two traps we have set in the water.”

In a 20-minute bilingual presentation, passengers learn how lobsters get in the trap, what attracts them to go in the trap and about the industry.

“We tell them a little bit about the biology of a lobster, how to tell if it’s a female or not.”

A few of the passengers are picked to help take the lobsters out of the traps and put the rubber bands on their claws. Then these volunteers get a surprise. But Cormier said you need to go on the cruise to find out what it is.

The passengers are told how to cook a lobster the Acadian way and then taught how to properly eat a lobster.

“I show them without a cracker and no hammer. We teach them how to do it all by hand.”

Everyone is then served a full course lobster dinner and enjoys it while the boat is anchored in Shediac Bay. 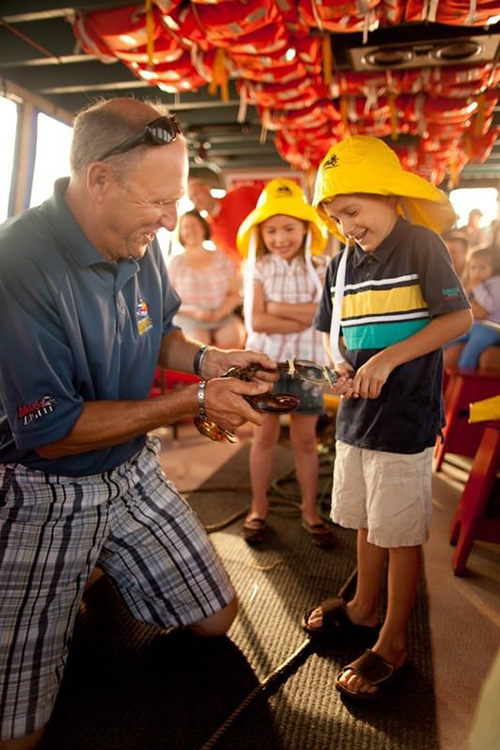 Putting elastics on lobster during the Shediac Bay tour.

There are many repeat customers who return with new friends and relatives to share the experience. Many enjoy the evening cruise.

Cormier said they also do private charters and have even hosted a few weddings on the boat.

“There’s not much we can’t do at Shediac Bay Cruises.”

Cormier became involved in the business when he operated the boat for the previous owner, Eric LeBlanc.

Cormier met LeBlanc when he was president of the Maritime Fishermen’s Union and heavily involved in the political side of fishing. He had meetings in the late 90s with the young man who just wanted to tell the story about the lobster.

LeBlanc required a permit to have two tags and two lobster traps as part of the business and needed MFU’s permission.

“He had a vision of what he wanted to do and he was very persistent in making his idea a reality. I can still remember him in those early days. He had a small lobster boat that he could take 10 to 12 passengers.”

By 2003, LeBlanc’s business grew to the point he was making four to five trips a day and knew it had to expand. That’s when The Ambassador was built, the boat Cormier still uses today.

It holds up to 65 people and is outfitted with a kitchen, bar, seating area, upper deck and washrooms.

Cormier said LeBlanc continued his hard work to build and market the business. His efforts paid off with interest from all over Canada, the United States and beyond. Tour bus operations have Shediac Bay Cruises and Lobster Tales on their schedules.

After LeBlanc’s death at the age of 33, Cormier helped his parents run it for a year and was then presented with the opportunity to buy it five years ago.

“I said to myself knowing Eric, I can’t let this down. There was something pulling me toward that business. I don’t know if it was Eric’s spirit or what it was.”

He continued fishing for two years before taking advantage of the federal government’s buyback program to stop fishing lobster and have his license retired.

“When I sold, I thought, I’m still on a boat, I’m still dealing with lobsters,” he said then started laughing. “I only kept two things — my rubber pants and my rubber boots. I sold everything else. So whenever I need that fix, I’m gone fishing.”

Cormier admits there are times he still misses fishing after doing it for so long.

“Oh yes, I won’t lie. There are still times I wish I was but it becomes less and less as each year passes.”

Shediac Bay Cruises and Lobster Tales is a family business involving Cormier, his wife Denise and their two daughters, Renée and Chantal.

“We’re having a blast. We have good people working with us,” said Cormier.

He feels he is carrying on as LeBlanc would have wanted it to.

“It’s what Eric would have wanted. I keep remembering what he used to tell me. He said, ‘Ron, we have to tell the story.’”

Cormier admits he didn’t get what LeBlanc meant at first but he says he got when he started doing the presentations.

As homage to LeBlanc, Cormier had a small fish made and in its center are the words ‘E-Dream’. This fish is on the front of the The Ambassador.

“This was Eric’s dream and we’re keeping it alive.”

Concentrate on the Issues and Don’t Sweat the Small Stuff

No Replies to "Still on the Water"