After surviving a brutal trek over a mountain through snow and ice, a partially frozen river and ice-covered rocks in bare feet, Dave Barnes eventually made it to the relative comfort of a small cabin located on Ten-Mile Bay, south of Nain, Labrador. For a while, it seemed the remainder of his journey home would be in relative comfort compared to what he suffered in the previous nine hours. But comfort would prove to be elusive. This is Part V of “Survivor Extreme”

The cabin on Ten Mile Bay was used daily as a place to make lunch or provide warmth for workers from Nain and surrounding areas involved in the mining industry.

The next day, Thursday, would be a workday and Dave knew that men would be returning to the cabin early in the morning.

After getting things arranged for an overnight stay, Dave started to feel pain in his feet and lower legs. Having his feet totally frozen for hours, Dave knew he would suffer severe pain when they thawed.

Meanwhile, he put the kettle on the stove to make a cup of tea. He was thirsty but figured hot tea would speed up his recovery. It was about 2:30 a.m. and as Dave waited for the water to boil, he opened the large bottle of Cheez Whiz he had seen earlier and ate the whole thing.

The processed cheese spread felt good but drinking a cup of hot tea nearly killed him.

Dave didn’t realize that his internal body temperature had dropped to a very low level and would take hours to return to normal. Pouring steaming hot tea into his stomach felt good for a few moments, but it was the worst thing he could have done. His body went into a form of shock causing extreme pain and uncontrollable shaking.

“I never felt anything like it — between the pain in my feet and legs and whatever reaction the hot tea had caused was unbearable. For the first time since this whole thing started, I really thought I was going to die. The next thing I knew, I fell off the chair to the floor and blacked out.”

Still in severe pain, he said he was like a piece of broken machinery.

“I lay there on the floor, seized up solid — couldn’t move except for the shaking that I couldn’t control,” he explains.

Dave’s body was, more or less, paralyzed after his long struggle to survive, but it seems his sense of hearing had either magnified with his intense stress and/or the outside weather and atmospheric conditions were ideal for transmitting sound in the perfectly still November morning.

“A bird walking on the roof of the shack woke me and a few minutes later I swear I heard a tug start up its engines in Nain, several miles away,” he says.

Whether he was hallucinating or wishing too hard, Dave learned later that a tug had indeed started its engines at that time.

In the meantime though, all he could do was wait and pray that someone would show up soon.

A short time later, Dave heard a tug docking at the Inuit Development Association’s wharf on Ten Mile Bay and then he heard the joyful sound of people walking on crunchy snow coming closer and closer.

Two Inuit men entered the cabin. They panicked when they saw Dave lying on the floor. He tried to talk to them, but they couldn’t speak nor understand English, so they ran to get help. 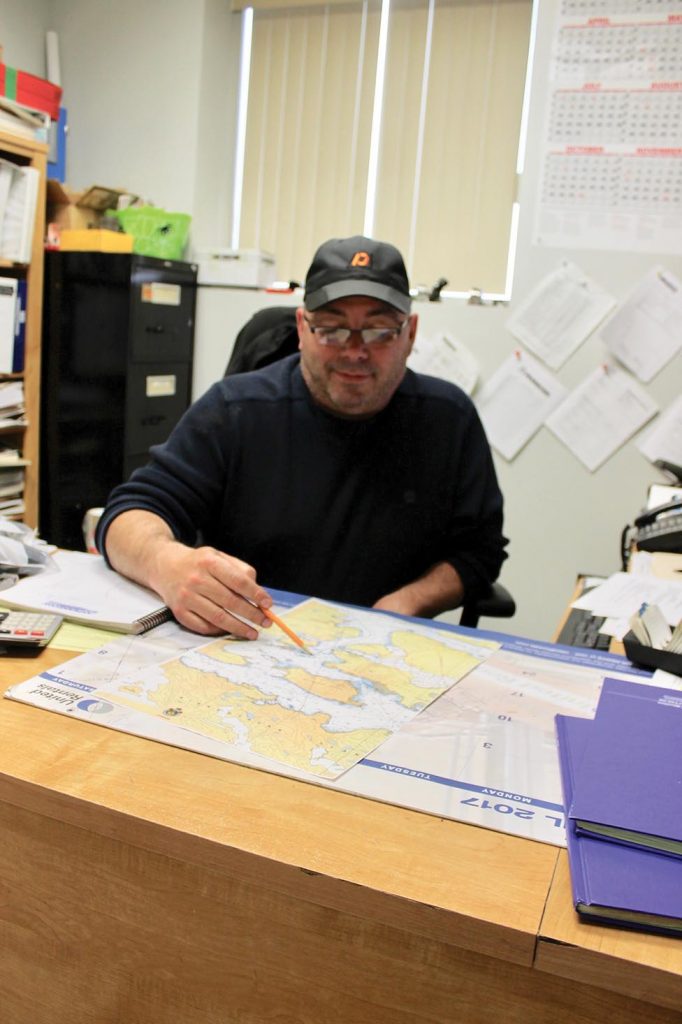 Dave Barnes points to Jenks Rock on a chart of the Voisey’s Bay area in northern Labrador.

“It was a tense few moments for Ed,” Dave recalls.  “He asked about his brother Scott and the other two guys on the Sea Alert with me that day and when I told him I was almost 100 per cent sure they all went down with the tug. He had to leave the cabin.”

Meanwhile, someone ran to the Checkmate III and contacted the Coast Guard.

As luck would have it, there was helicopter on the ground in Nain at that time. In fact, it was the helicopter that flew over Dave on the shoreline several hours prior. Dave says they weren’t long getting the chopper in the air because only 15 minutes later it landed near the cabin and within a half hour after that, he was in hospital in Nain.

Dave laughs as he recalls the scene in hospital.

“They wrapped me up in heating pads and tin foil and turned on heat lamps that looked like flood lights. I looked a turkey in an oven,” he laughs.

Dave had to remind hospital staff that he’d been at the cabin for several hours and had warmed somewhat, explaining that the heating pads, wrap and lamps were too hot for him to tolerate. Staff then proceeded to clean and bandage the many parts of his body that had been frozen and cut during his incredible ordeal.

In yet another amazing detail, Dave discovered that his wallet was still in his pants pocket. His money was rumpled from being soaked the previous day but was still useable. He gave $50 to one of hospital staff and asked her to go buy him new pants, a shirt and other clothing. An hour or two later Dave was on a plane to Goose Bay and by early afternoon he was on another flight to Gander.

Although weak and unable to stand, Dave was still very much in control of his mind.

He refused to go to hospital in Gander, opting instead to go to be as close as he could to his home on the south coast. He needed emotional comfort as well as physical treatment and being with family was the best way to fill that need.

His father and his son met him at the Gander airport and drove him to Hermitage where Dave insisted on spending the night at his dad’s house instead of going to a hospital. He went to the Harbour Breton hospital the next day.

“What a panic they went into at the hospital,” Dave laughs.

“When they saw all the bandages and found out what I had gone through in the past 40-odd hours up in Northern Labrador and now here I was in Harbour Breton hospital on the south coast of Newfoundland as an outpatient, they couldn’t believe what the hell they were seeing.”

The doctor admitted him and suggested that he would likely have to transfer to hospital in St. John’s if he didn’t show signs of improvement within a day or two.

Dave also figured he would wind up in St. John’s because everyone was saying that it was beyond comprehension that he was even alive, so he assumed he must have suffered serious internal damage that had not manifested yet. Also, there were some physical deformities that were obvious.

“For example, I looked down at my feet because they had been totally frozen and after walking through snow, ice and on sharp rocks with no boots on I figured that was going to be an issue. I noticed that all my toes were turned up. It was like someone had broken all of them and pointed them up at 90-degree angles — looking up at me.”

Still in severe pain most of the time, Dave says he crawled around more often than he was standing. But, determined to get back to normal he worked hard at therapy and despite suffering discomfort in his joints, Dave made an amazing recovery.

“My feet were the worst and I take good care of them now and wear all the right shoes and boots — I don’t take anything for granted.”

Physically, it was a matter of time as he improved slowly but surely.

His mental recovery however, was another story. For years he suffered nightmares that disrupted his sleep and rest. He also had severe survivor’s guilt.

Dealing with the loss of his shipmates was one thing, but Dave lived in the same small community as his friends Dave House and Eef Skinner who died on the Sea Alert and he would see their family members almost every day. He says when he would see relatives of Eef and Dave, the horrible memories would start all over again. Eventually he moved to St. John’s to start a new life.

Dave was haunted by the accident for years until another tragic event had an unexpected result. His niece died on the anniversary date of the sinking of the Sea Alert, 14 years after the accident. She was just 14 years old and Dave’s deep sorrow over her passing shifted his focus from himself to her, especially on November 1, each year.

It’s been 23 years this month since the tugboat Sea Alert sank taking Captain Scott Kean along with crewmembers Ephraim (Eef) Skinner and Dave House to the bottom of the Labrador Sea. Dave Barnes survived but only after unbelievable determination and grit. That he survived can easily be considered a miracle but to be almost totally healthy with minimal medical deficit is truly miraculous.