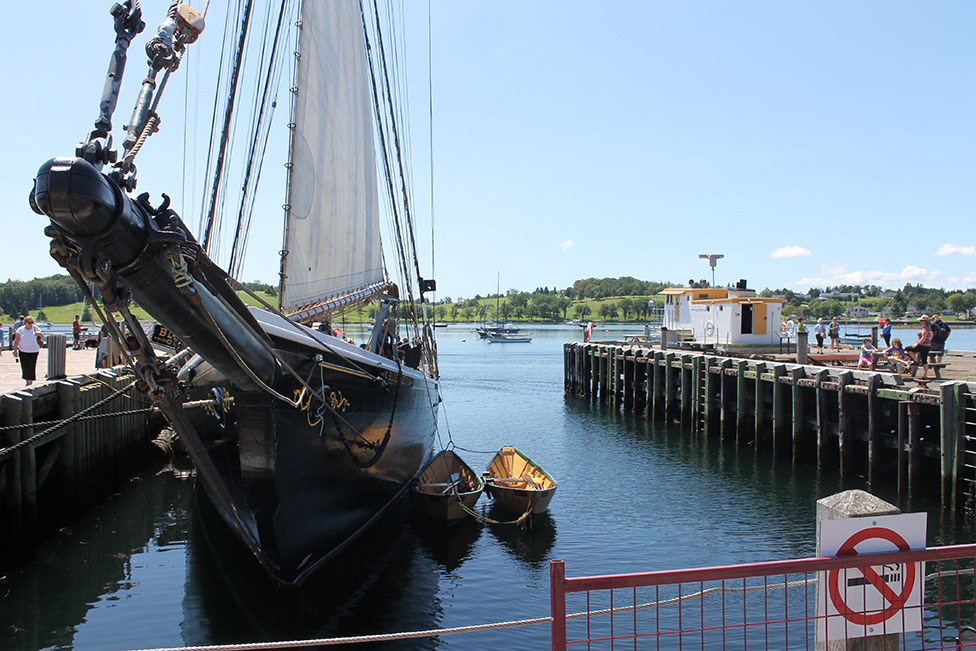 Nova Scotia will have the honour of having two of its fishing vessels featured on Canadian currency when the Cape Islander will be part of a commemorative Loonie celebrating this country’s 150th anniversary.

The first one was the Bluenose, which first graced the Canadian dime in 1937.

The Bluenose was built in Lunenburg, N.S., to fish and race against its counterparts in Gloucester, Mass., in the 1920s.

The schooner design had actually been developed in Gloucester, which became a town 40 years before Lunenburg in 1713. These vessels could carry a lot of fish, as they ventured out on the outer banks of Nova Scotia and Newfoundland.

When the Bluenose was built, a Nova Scotian-built schooner had just lost an international race with a Gloucester opponent.

The Halifax Herald put up a nice trophy and $4,000 for the winner of a Lunenburg-Gloucester schooner race.

While the Bluenose was the 121st vessel built by the Smith & Rhuland Shipyard in Lunenburg, its design by naval architect William J. Roue was a bit different due to regulations associated with this race. But for all intents and purposes, the Bluenose was just another Nova Scotian schooner.

But no two trees are the same and while other schooners in the Lunenburg fleet were almost identical to the Bluenose, none could touch her when it came to speed.

She won every race she entered, including her final one in 1938, when she was well past her prime and gasoline engines were taking over the fishing fleets.

Efforts to save her failed and she was eventually sold to an American firm for $20,000 where she toiled between Florida and the Caribbean during the war, carrying freight. She eventually gave up the ghost on a shoal off Haiti in January, 1946, after having been sold for $300,000. The vessel had been built for $35,000.

In 1963, a full-sized replica was built for the Olands Brewing Company of Halifax, to be used as an ambassador for the country, Nova Scotia and of course the brewery. It became known as Bluenose II and for the next 40 years or so served in this capacity very well. It was built for $300,000.

But age soon wrapped its ugly claws around the vessel and it was turned over to the Province of Nova Scotia for a dollar, I think.

Patchwork worked for a time, but it became apparent that the ship either had to be completely re-built or scrapped.

The province choose to rebuild at a projected cost of $14.4 million.

The bill has now surpassed $28 million and continues to rise as the vessel undergoes yet another ‘revision.’

The Cape Island fishing boat is the mainstay of the inshore fishery in Nova Scotia. Also known as the Novi in Maine, the vessel first saw light in Clark’s Harbour, Cape Sable Island in 1905.

Just who designed and constructed the first such vessel is a huge debatable point on the island, but according to Freebert Atkinson, a shipbuilder from Barrington who passed away last year, it was one of his ancestors who came up with the idea of a vessel with a high bow and fairly large working area for its day.

The first Cape Islanders didn’t have a house, just a cuddy and the vessels hung close to shore. No radars or Lorans in those days.

As with all things, change came to the inshore workhorse. The original had a flat bottom, which rounded out at the stern. Eventually the vessels got larger and more agile with the stern lifted, making the vessel easy to turn around — on a dime, one could say.

When I retired from my previous occupation as an editor, I was presented with a miniature replica of a Cape Island fishing boat. From the looks of it, I would say the design was taken from vessels which plied our waters in the late 1960s and early 1970s.

I had my uncle Basil and brother-in-law Emile in for a meal and they remarked that my replica didn’t look like a Cape Islander at all.

I begged to differ.

That was the way they looked before fibreglass took over, the vessels became longer and wider and the stern was opened up making it easier to set 15 trap trawls in the lobster fishery.

The vessels are now 50 feet long, some of them 23 feet wide. They are quite high off the water, making them safer when venturing out in bad weather or 40 miles out as many of them do during the winter fishery in southwestern Nova Scotia. And fibreglass has replaced wood as the building material of choice.

These ‘Fat Fifties’ look more like draggers or longliners than lobster boats.

And even with hefty price tags of $700,000 plus, most boat yards have two-year waiting periods for new constructions.

But if any boat was to be honored in this way by the Canadian Mint, I couldn’t think of any other than the Cape Island fishing boat which is truly a Made in Canada icon.

Happiness is a Clean Boat