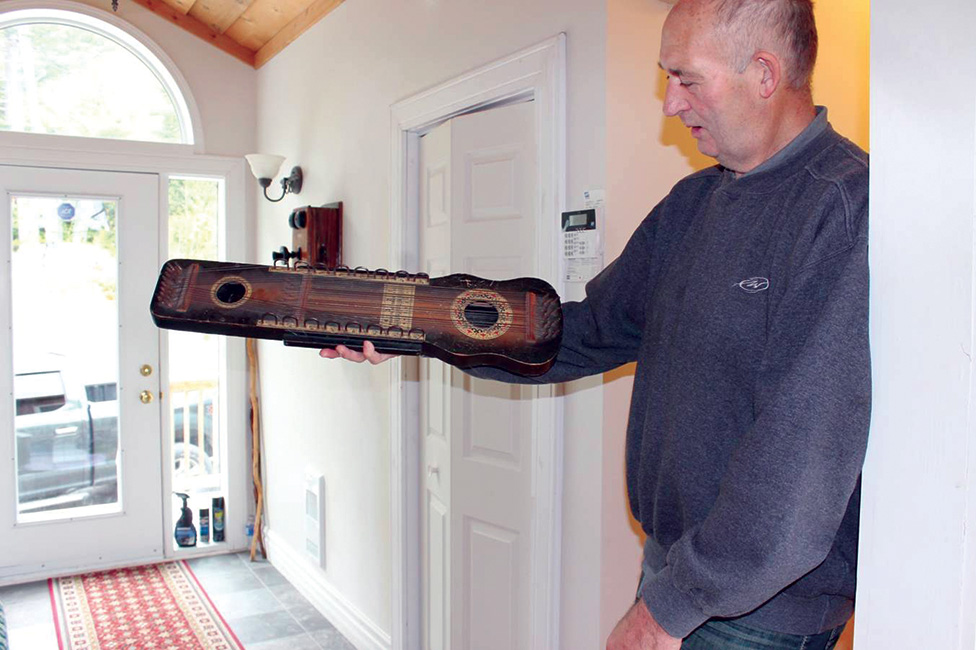 The Collector — Part I

Garry Smith is an impressive man in several ways.

At 6’7” he definitely stands out in a crowd. He is literally head and shoulders above the rest. He has to bend down to get through standard 6’6” doorways and he can’t even fit into compact cars.

The 63-year old veteran fisherman, who grew up in Gooseberry Cove, Trinity Bay, now has homes in Clarenville and St. John’s. How much time he spends in each depends on the time of year.

During fishing season, he lives in Clarenville mainly and spends more time in St. John’s off season. Garry continues to fish crab and cod from two vessels. One is a 35-foot Cape Islander, the Great Heart’s Ease and the other is a speedboat.

Garry comes from several generations of fishermen on both his father and mother’s sides of his family. His says his dad was perhaps the first fisherman in Newfoundland to carry out a commercial salt mackerel fishery.

“He salted mackerel and shipped it in barrels, probably to the Caribbean market,” Garry says, adding that his dad later became a fish inspector with the Canadian Saltfish Corporation where he gained considerable prominence in fisheries circles, provincially and nationally.

Another notable relative was his grandmother, Olga Smith, from Gooseberry Cove who devoted her life to midwifery. Her last call to deliver a baby came during a cold winter’s day and the only way she could get to the mother was to travel by open boat. She caught a cold that turned into pneumonia and she died. She was just 44 years old.

Despite her early death, Mrs. Smith delivered nearly a thousand babies in various communities in Trinity Bay. In some cases she delivered four or five babies to the same mother. She was never paid for any of her long days and nights of selfless work.

Garry had his own enterprise at the age of 12. He owned a 21-foot motorboat and fished cod, salmon and lobster. Unlike most boys his age who fished in the 1960s, Garry didn’t quit school when he knew he would be a career fisherman, opting instead to get at least a high school education.

The fishing season overlapped with the first and last few weeks of the school season, but the joy of fishing trumped getting a full night’s sleep and Garry was on the water by daylight and had a half day’s work completed before school opened. The other half-day’s job requirements would be completed in the evenings after school. Garry smiles when he talks about those days fishing in the 1960s.

“I was getting 2.5 cents a pound for cod,” he says, explaining that fishing didn’t make anyone rich back then, but he loved the lifestyle and worked hard to make a decent living.

Like his dad, Garry was innovative and didn’t wait for others to lead the way. He was the first in his area to get a fibreglass speedboat and says it’s possible that he may have been the first in all of Trinity Bay.

He wasn’t afraid to voice his opinion on issues, even when many fishermen disagreed with him. Several years ago he was afraid that the turr (murre) population was vastly overexploited in Trinity Bay and in danger of extinction. Garry organized a petition to reduce the bag limit and was successful. He took some flak for it but he says there is no doubt that his efforts resulted in a much healthier turr resource in the area.

Likewise today, he is afraid that crab and shrimp stocks might be pressured too heavily and he favours significantly reduced quotas, even if it means short-term pain. He doesn’t want to see the same thing happen to shrimp and crab that happened to cod when the telltale signs of impending collapse were obvious in the late 1980s and early 1990s.

Over the years Garry went from small open boats to a 50-foot longliner and today fishes from a 36-foot Cape Islander, one of the best boats, he says, he has ever had.

The Cape Islander may be the best boat Garry has ever had, but his most notable boat was a 42-foot fibreglass vessel he owned in 1987. Its notoriety was not because of the vessel itself but because of an incident involving it.

One day in August 1987, Garry received a call from a RCMP officer who said he needed to hire a boat with certain carrying capacity to take him across to a small nearby resettled community called Ireland’s Eye.

Garry didn’t ask why the police needed his services, but agreed to help them anyway. When the officer asked the cost, Garry said he would need to be reimbursed for his fuel and the deal was done. It was a nice day so Garry asked his then girlfriend (now wife) Kathy Porter if she’d like to join him. Kathy accepted and off they went.

Just before approaching Ireland’s Eye, the Mountie asked if Garry knew why they were going there.

“I said I had no inkling whatsoever and then he told me they were going to pick up a huge stash of illegal drugs — hashish.”

A million worrisome thoughts flashed through Garry’s mind. This was the area where he and his brothers often fished and, in fact, the drugs were in exactly the same sheltered spot where they often moored their boat to get a couple of hours sleep before fishing early the next morning. In fact, they had done that as late as the evening before the bust.

He wondered if they had made an innocent wrong move when the smugglers were going back and forth whether he would still be alive to tell the tale.

“It was just like a scene out of a movie,” Garry says,” adding that he is still a little hesitant to talk about it, afraid that some people may think he was involved with the bad guys because it was later rumoured that several local fishermen were in cahoots with them.

Garry knew there was no turning back at this stage, but he admits he was concerned. Adding to Garry’s discomfort was the Mounties obvious disgruntlement when he learned that Kathy was a CBC journalist who now had a front-row view of what the police wanted to be a quiet event with no publicity.

Despite Garry’s tension, everything turned out fine and he recalls the day’s activities in vivid detail.

“There were about 500 sacks made of material that reminded me of old-fashion potato brin sacks, with 20 bars of hashish in each sack — they were shaped almost like gold bullion bars like you see on TV. There was one sack open and I could see the bars were even branded. The sacks were covered with boughs just a few feet back from the high water mark in a little valley area on the beach when we got there,” he recalls.

Garry says there were police officers and others waiting for their arrival and wasted no time beginning to load the hash onboard his longliner.

“There were 18 of us loading the boat and it took two and a half hours non-stop to get all the stuff on. There was about 13 tonnes of it, worth nearly $250 million dollars — my fish hold was full and there were more sacks on deck.”

The hashish seizure was the largest drug bust ever in Newfoundland up to that time and allegedly masterminded by Vito Rizzuto, Canada’s most notorious crime boss.

Garry’s Collection
Entering Garry and Kathy’s house in Clarenville, you know immediately that you are in store for a treat.

An old fashioned crank wall-phone is prominently displayed just inside the doorway. A couple of desktop dial phones, along with an old set of binoculars sit on a table in the living room and when you stop gazing at the roll-top desk nearby you may notice a half dozen or more kerosene and/or gas lamps sitting on a ledge above the large living-room window overlooking Random Sound. All phones and lamps are in working condition. The grandfather pendulum eight-day clock dating back to 1878 also works.

There are other antiques on the main floor but the big showroom is located downstairs and resembles a museum.

The first thing you see is a collection of floor model radios. There is a like-new ringer washer, an old gramophone, a humidor and tobacco, military caps from European countries and there is even an armchair commode.

But the crown jewel of all Garry’s collections is locked away in three large vaults like those seen in banks. And then there is another large collection of a different theme located in another structure on his property that is also extremely impressive.

Space does not permit us to show you photos of those this month so be sure to join us in the August issue of The Navigator as we continue our visit with “The Collector.”

You are in for a treat.

Northern Cod Will Need More than a FIP, it Will Need the Unity of All Stakeholders

No Replies to "The Collector — Part I"