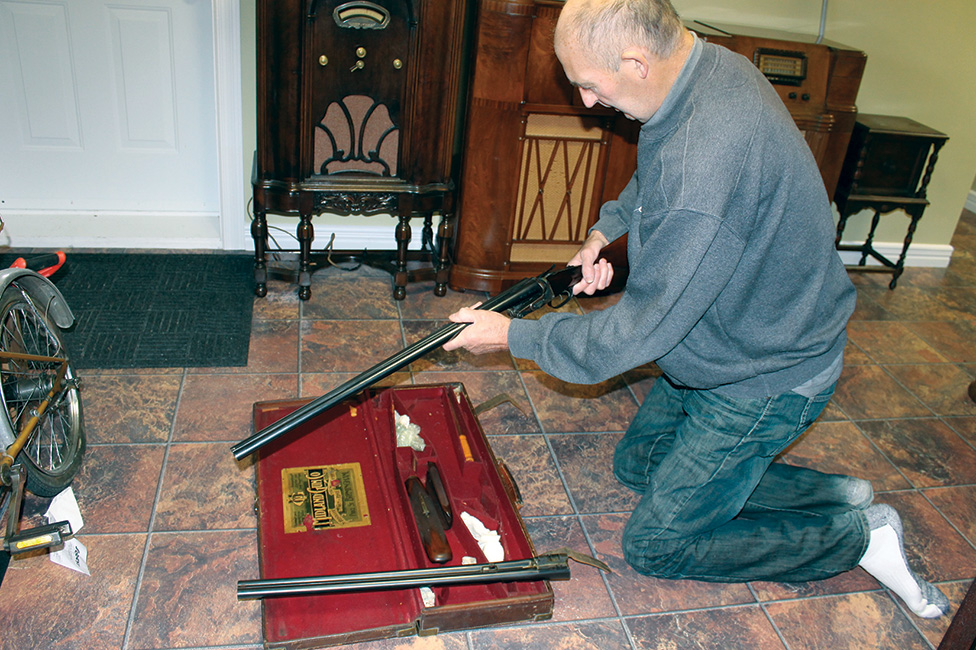 In the July issue of The Navigator, readers were introduced to Garry Smith from Clarenville, Newfoundland.

The tall, 63-year old fisherman has always been passionate about the fishery and the need to treat all marine resources with care and respect. He is also known as a good humanitarian who has always helped those less fortunate, including a personal interest in helping a family of refugees who recently arrived in Newfoundland from Syria.

Garry also has deep regard for Newfoundland and Labrador’s culture and tradition — marine and otherwise. Even as a young man, he had a keen sense of the importance of preserving items of historical significance and would acquire things and stow them away in his parent’s home in Gooseberry Cove or wherever he could find a place to keep them safe. Today, his collection has grown to the size of a small museum.

One of the two crown jewels of Garry’s possessions is his treasured rifle collection, most of which are WWI vintage and all in mint condition. For safety concerns, Garry keeps his rifles stored in three refrigerator-sized vaults that weigh upwards of 600 pounds each. A smaller version of bank vaults, the walls are a foot thick and fire proof.

“If the place burnt to the ground, the contents in those vaults would be secure,” Garry explains.

Opening one vault at a time, Garry removes the guns with care while explaining the military significance of each one. Most are magazine-fed .303 rifles, the standard firearm of the British Army from 1895 to 1957. Some military forces still use them today.

As Garry points out in his show-and-tell presentation, not all rifles are created equal. Even the most popular Lee-Enfield version of the “three-oh-three” comes in various shapes and sizes, all designed for different purposes.

He demonstrates one that has a spring-loaded cap that covers the front of the barrel between firings. The cap protects sand/mud/dirt from entering the barrel of the gun if a soldier fell face-first in rough terrain. Some have short barrels while others have short stocks and longer barrels. All are fascinating.

Make and Breaks
A mere mention of make and break engines to folks of a certain age who grew up in coastal Newfoundland and Labrador suddenly renders them to blathering blobs of nostalgia. With glowing faces and broad smiles, they speak, almost reverently, about waking up on summer mornings to the distinctive putt-putt-putt sound of motorboats steaming out the harbour, headed to the fishing grounds.

Someone joked that any attempt to guide those people away from their precious memories of the “good ol’ make and break days” must be done gently for fear of the consequences of sudden emotional decompression.

So far, Garry has collected 30 make and breaks and like his antique radios, phones and rifles, all are in operating condition. The majority of his engines are Acadia and Atlantic brands, made in Nova Scotia and two are Barnes, built in Newfoundland.
Garry started his engine collection when he learned that hundreds of people from outside Newfoundland, especially from Nova Scotia, were traveling to Newfoundland and buying every make and break they could get their hands on.

“I know that most of those engines were built in Nova Scotia, but they were owned and operated by Newfoundland fishermen and I wanted to make sure that some of them stayed here,” Garry explains.

Garry doesn’t talk much about the value of any or all of his collections, although it is obvious that it is a considerable sum.  It’s not something he thinks about a lot because none are for sale — at least not yet. He says in another 10 years or so, he may consider divesting some of the items. He says the guns and radios could be sold to anyone, anywhere, but his engines will have a condition of sale — the buyer must agree that they stay in Newfoundland and Labrador.

In an era when many people loudly tout the importance of preserving cultural and historical significance but do nothing more about it, Garry Smith puts his passion and his money where his mouth is.

No Replies to "The Collector — Part II"