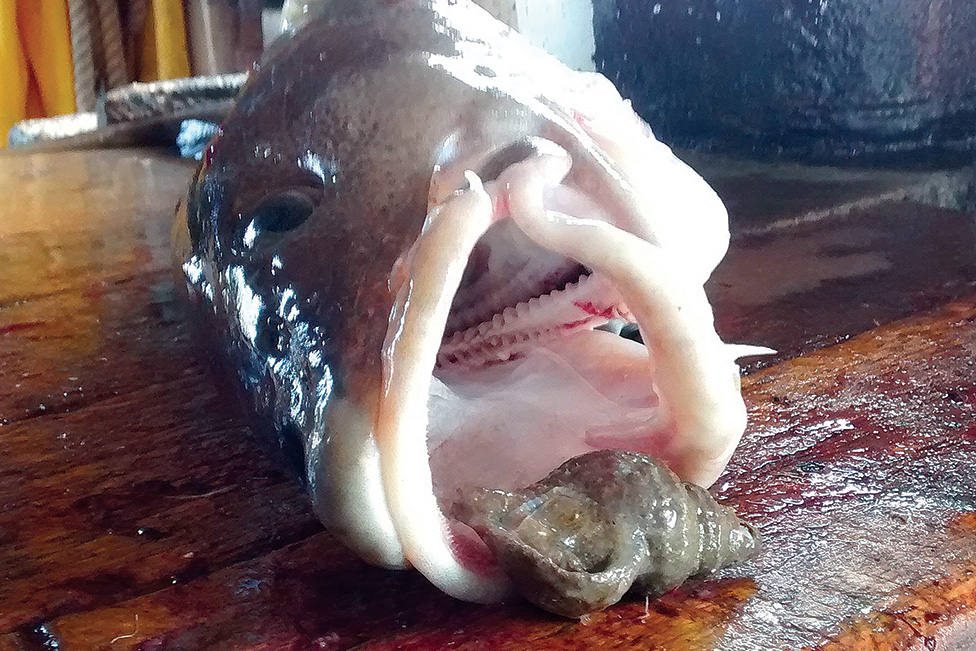 The Current Fishing Industry is Broken

I have seen a lot of cod in my time, but never before, especially at this time of year, have I seen cod foraging on the bottom for everything and anything to keep from starving.

This year, in the stomachs of cod, I have seen sea spiders, star fish, but trying to survive on whelk takes the cake for me. (See above photo)

The whelk in this photo came out of the mouth of this cod as I put it on the splitting table this past summer.

Maybe, just maybe, we should consider why there are no capelin in Notre Dame Bay this year, as well as many other areas of the province. With the cod back in abundance, perhaps we should be paying more attention to the bottom of the food chain, as well as dismantling the cartel (worse, in my mind, than the Mexican drug cartel — as they did do some good for the locals) and allow free enterprise in the fishery so we can have a viable and profitable cod fishery again — the reason why we came to these shores more than 500 years ago.

Today, we have no one to sell to and when we do, the prices paid by the cartel are back in pot auger’s days. It is shocking. And no one is to blame but the provincial government whose new ministers and premiers are controlled by the bureaucrats dancing to the tune of a few corporate owners.

In my mind, the FFAW has evolved into a self-serving corporation, which coupled with the PFHCB and other groups like the CSA, has turned Newfoundland into the best little communist state left in the western hemisphere.

Imagine fish processors with the power to prevent fishers from changing buyers. I know several crab fishermen this spring that wished to change buyers, but were denied the right to do so. And our Danny said there was no collusion.

A farmer in Saskatchewan can pass his farming enterprise on to his lawyer son or daughter in Regina, but a fisherman’s hands are tied unless his son or daughter fishes with him for five years.  An individual, who has invested and built up an enterprise over the years, should be allowed to pass that enterprise to his children if he wishes. Having said that, we all agree the recipient would have to complete basic safety courses.

What is required to fix the fishery is a breath of fresh air, but that will take politicians willing to stand up and do the right thing — because as sure as Hell, the system is broken and those of us old enough to remember when we could steam in to the local plant and sell our cod, herring or mackerel, yearn for the return of democracy, free enterprise and capitalism in the fishery.

No Replies to "The Current Fishing Industry is Broken"