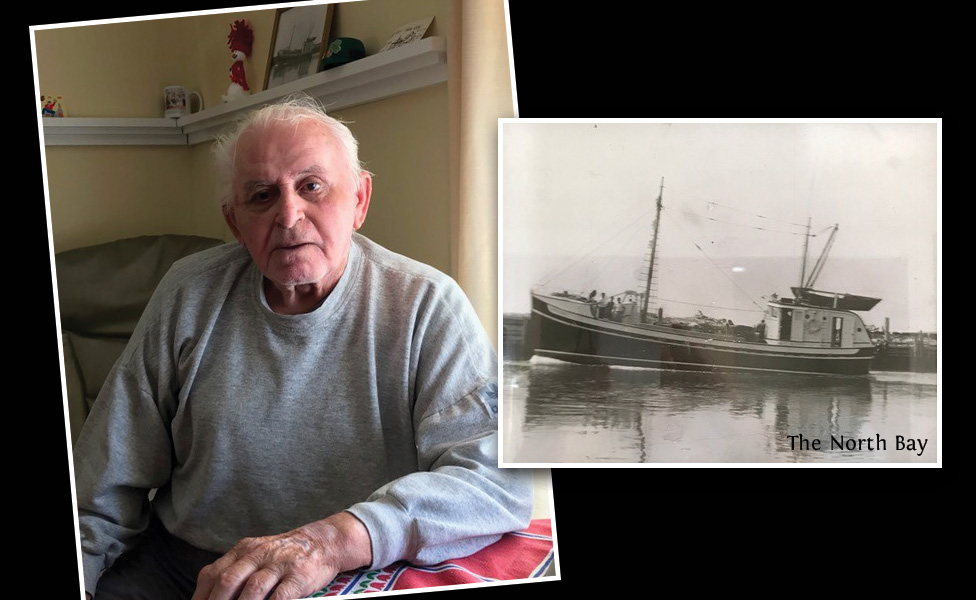 The Dutchman in the Promised Land – Part II

Last month, we introduced you to a hard-working fishing skipper from Souris, Prince Edward Island. Bert Boertien moved to Canada from Holland in 1950, two months before his 18th birthday. After trying his hand at farming on Prince Edward Island for a couple of years, Bert later decided on a life at sea and went fishing. In 1959, he purchased the 65-foot dragger North Bay, the first of a series of vessels that he would own or captain as he carried out a very successful fishing career for over 30 years. It quickly came to an end when a serious back injury forced him to take early retirement before he turned 60. Bert had some close calls along the way but today, at nearly 85, he’s still alert and can recall each adventure in great detail. That’s exactly what we discovered when we contacted him in Souris recently.

Bert and his crew of the North Bay left port near the Canso Causeway about 4 a.m. with the intention of fishing off Mabou, on the west side of Cape Breton.

About an hour into the trip, Bert smelled something strange. When he checked the aft cabin, it was full of smoke.

“There were no flames in the cabin but when I opened the door down to the engine room, I could see a fire smoldering on the port side where the batteries were, so I grabbed the fire extinguisher and got down as far as I could but when I squirted out what was in the extinguisher, it made it smoke more,” Bert recalls.

Unable to see anything, Bert retreated from the cabin and closed all the doors hoping that by cutting off the air/oxygen supply, the fire might not burn any further. Still, not willing to gamble on that, Bert told his crew to clean out a dory that was lashed to the deck and prepare it for a quick evacuation if necessary.

The fire smoldered for nearly two hours until suddenly the men heard a loud explosion and within seconds, flames were coming through the vents and other openings from the engine room.

It was time to get the dory over the side.

The weather was fine. Seas were calm and visibility was good which was fortunate for Bert and the crew because when the wheelhouse filled with smoke earlier, the radio set was already dead and that meant there was no way to send a mayday or alert anyone to their plight.

As the men sat in the dory and watched the North Bay burn and sink deeper into the ocean, Bert remembers one mesmerizing image that he can visualize now as if it happened yesterday. His vessel was about halfway submerged when the aft section swung down and the bow stood straight up in the air at a 90-degree angle with the ocean.

“I guess there was an air pocket in the bow or something but whatever the case, that was an amazing and dramatic thing to see,” Bert says, adding that it was almost like the vessel was a defiant living thing and not going down without a fight. 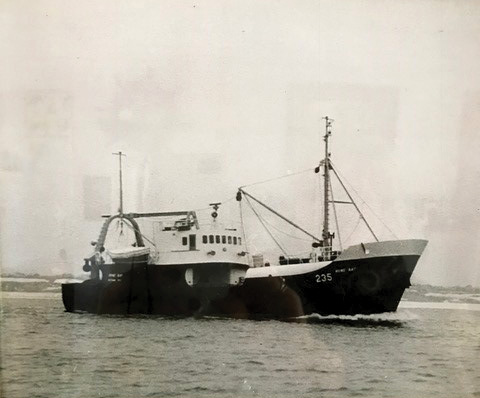 As Bert and the crew watched the North Bay disappear beneath the waves, they saw a small fishing vessel approaching. The skipper of the vessel lived in the vicinity and his wife had a good set of binoculars that she used to keep an eye on her husband when he was on the water in case something went wrong.

When she saw smoke on the horizon, she contacted her husband on CB Radio to inform him about it. He stopped fishing and went to investigate. A little while later, the crew of the North Bay was on the way home none the worse for the ordeal.

Bert Boertien never wasted much time looking back. Whatever event or incident that life handed him, regardless of whether it was positive or negative, Bert dealt with it and moved on, always focused on the future and not on the past.

He learned whatever he could about the fishing industry, including the business of boat building and all other aspects of the entire industry. Having grown up in Holland, Bert may have possessed a broader view on things than some of his peers in Atlantic Canada. He kept up to date on new fishing gears and technology in all fishing nations.

He was especially in tune with what was going on in Europe and was always receptive to trying new gear. Boyd McMaster fished with Bert in 1984-85 and recalls Bert installing a set of non-traditional trawl doors.

“As I recall, they were Bison Trawl Doors and I think they were the first set to be used in the Atlantic area fishery — popular, I believe, in Scotland and North Sea areas at that time,” Boyd says.

On May 1, 1964 the Howe Bay, the first steel trawler to work out of P.E.I., steamed into port at Souris. It was a big deal. The media was there to cover the event and reported that the Island’s fisheries minister and other dignitaries were also on the wharf to greet the ship.

Who was the captain of the 92-foot vessel?

You guessed it, Captain Bert Boertien. 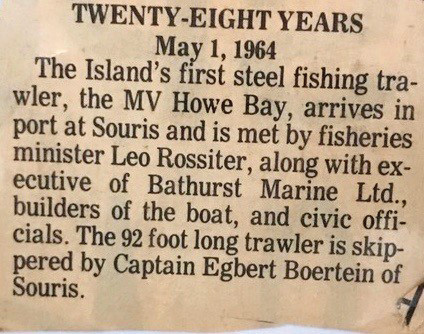 How Bay newspaper
clipping from 1964

Bert became very knowledgeable about vessels. He was good at visualizing the big picture.

His main interest was the trawler fishery that was then considered the wave of the future so Bert was sometimes asked to be an advisor or consultant for agencies like the Provincial Loan Board when they worked with fish companies and others who planned new constructions. Bert’s good friend and fellow fisherman, Edwin McKie, says was it wasn’t about the overseeing carpentry or the steel/welding techniques — it was about getting the most efficient fishing vessel possible by using suitable technology, design, etc. In fact, Edwin was a student-of-sorts of Bert. Bert taught twine school for a few winters where he educated new or young fishermen about, among other things, net construction and mending.

“It was also a great social event too,” Edwin laughs.

“It was always great getting together with the guys for a few weeks in winter and spending time with Bert. You always learned something new when Bert was around.”

Bert almost lost a leg while he was mate on the Winchester and he still has evidence to show from that accident, all those years later.

The gearshift on the Winchester wasn’t working properly. It would often shift from neutral into forward gear on its own, creating a danger if no one was paying close attention. The company told Skipper Bert to bring the ship to port and have the problem fixed. When they were docking in Souris, a crewman was having trouble securing a spring-line to an aft bulwark. Bert was watching from the wheelhouse and became a little impatient and decided to help.

“I guess I thought I could do a better job than he was so I went back and took the line,” Bert says.

Bert’s timing was not good. Just as he left the wheelhouse, the gearshift slipped out of neutral and into gear, driving the ship ahead. The strain was too much for the spring-line and it suddenly snapped and whipped across Bert’s left leg, breaking the bones in pieces.

The Winchester wound up hard aground in a mud bank at the waters edge. There was no damage to the ship, but Bert was in bad shape. 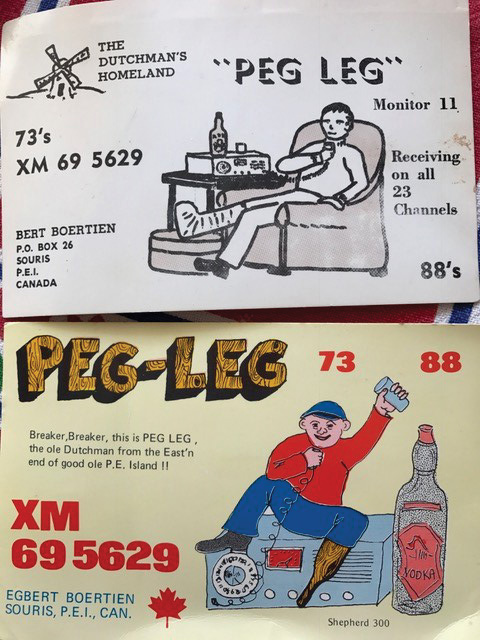 “My leg was broken real bad and I was in a leg cast for six months — I was laid up all summer,” he says, adding that doctors mended the broken bones with steel pins and screws that he still has today.

Bert was not active at sea for a while after that accident, but he certainly kept in touch with everything, especially via his CB radio set. His daughter Lorraine decided to tease her dad a bit about his predicament. CBs were very popular in those days and operators had “handles” or call names so Lorraine had cards, similar to business cards, made up and assigned her dad with a new handle “Peg Leg.”

Bert is the only survivor of 11 children. His eight older and two young siblings have all passed on. He loves to chat about all kinds of subjects from the stock market to politics but he lights up like a Christmas tree when someone mentions fishing. And, no matter how long you want to talk, there’s a pretty good chance Bert will have the last word.

Bert Boertien’s closest brush with death was in 1956 when a large trawler grounded and sank at the entrance to Halifax harbour. The Navigator will have that story in a Final Voyages article in the months to come.

Sharks are Making Waves - Part I

No Replies to "The Dutchman in the Promised Land - Part II"