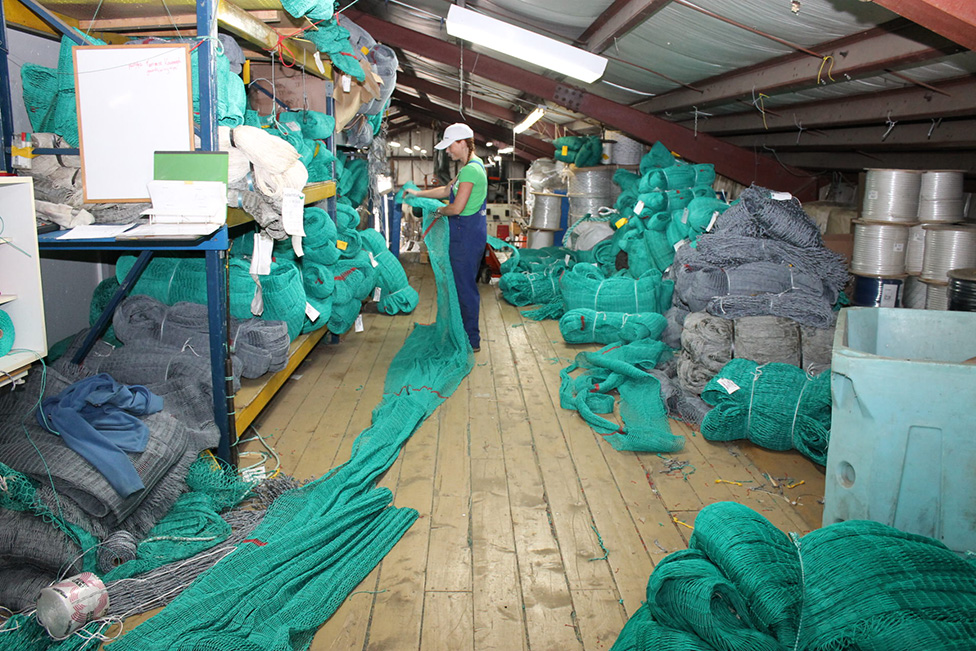 If they ever make a movie about Anne of Green Gables in her 40s, married with children, then Kim Pike would be the perfect Anne.

The 42-year-old mother of two from Harbour Grace, Newfoundland, has striking red hair that is often braided, along with greenish-blue eyes and freckles — just like Anne.

Kim is a trawl rigger.

For the uninitiated, a trawl rigger is a person who constructs or builds nets/trawls — those that Kim Pike and her colleagues at Hampidjan Company in Spaniard’s Bay work on are those very long nets that are towed behind large fishing vessels.

Most trawls are different and in many cases, custom made, depending on the requirements of each vessel owner or captain and what species they are fishing.

Kim says some fishermen prefer a stronger or heavier gauge rope or a slightly different mesh than others, adding, that of course there are limits and restrictions in place by government that must be followed.

Among the most efficient of all fishing gears, trawls are towed behind the vessel and used for the capture of species such as shrimp, redfish, cod, flounder, skate and hake. The mouth of the trawl is the widest part and the net tapers smaller toward the end, often more than 100 feet or more.

Kim started working with the company eight years ago when it was called Rope, Net and Twine. She didn’t have any idea what the job entailed when she responded to an ad in a newspaper. All she knew is that it was close to home and that was what first attracted her to check it out.

She had worked at higher paying jobs but, being the mom of two young boys, she didn’t like the long-distance commute in case her children needed her — especially since her husband is in the construction industry and often worked on projects that kept him away from home.

Kim admits that she didn’t even know what a trawl was at the time and was honest about it with management during her interview for the position, but they responded positively saying it was nice to have a totally fresh person who could learn the ropes, literally, and learn it the proper way without any preconceived notions of how it should be done.

“I really liked the idea of working there because it meant I would be active and not tied to a desk.” 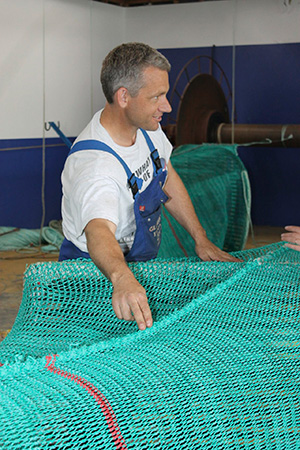 Manager Dave Kelly explains the next step to an employee working on a trawl.

Growing up in Riverhead, Harbour Grace, Kim was an active child and teenager. “For example, I used to swim a lot — wherever there was a hole of water, I would be in it,” she says, adding that the job means that she is in constant motion.

Hampidjan is an Icelandic company and owns trawl making and fishing supply companies internationally. But the operation in Spaniard’s Bay was known a ‘Bob Kelly’s’ before the Icelanders moved in and for most fishermen, it still is, no matter what sign is over the door.

There never was a company called Bob Kelly’s but Mr. Kelly is one of the best-known and most respected names in the fishing supply industry in Newfoundland and fishermen and didn’t care what he called the company — it was simply Bob Kelly’s.

If you check the notices in The Navigator today you will still find notices reading; Bob Kelly (trawl) doors or Bob Kelly trawls wanted to buy or for sale.

Bob put his own stamp on equipment, either through designing his own or modifying existing concepts.

We invited Bob to be our guest for this column, but he is a very modest man who shuns the limelight. However, it was through that process that we met Kim Pike. Bob still has a hand in the business, but his son David Kelly is in charge now.

Building/rigging a trawl is complex work. All of the pieces have to be measured, cut and then the mesh is hand-sewn together. Each step in the process has its own particular method to tie the knots, splice the ropes, and piece together all the mesh, twine and rope to make a functional net.

It takes a team of five or six experienced people three days to complete one net — which seems fairly fast to an untrained eye looking at the huge pile of material that is required to be laced and sewn together and “rigged.”

Not long ago, men did most of the net rigging. Kim says when she started in the business, there was only one female rigger with the company in Spaniard’s Bay, now about half of them are women.

“When fishermen come in into the store, they often seem a little surprised to see women working on the trawls, but after they talk to us for a few minutes, there is no problem — all they want is a good quality product and that’s what we want to give them,” Kim says. 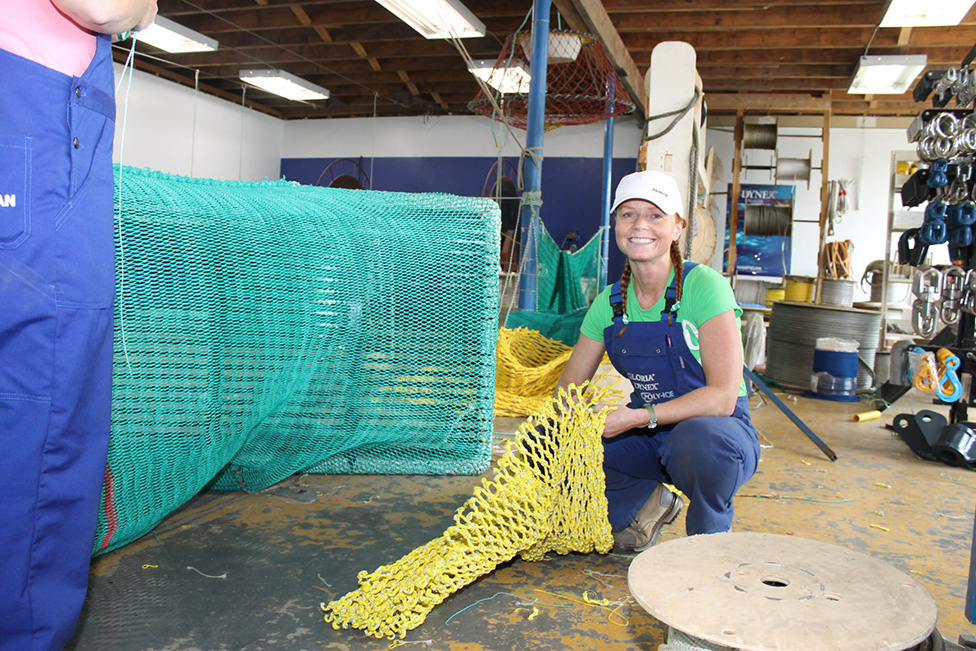 Kim enjoys her work and it shows — she smiles a lot. “Monday morning is always a nice day of the week for me,” she says.

An outgoing and affable woman, Kim is very comfortable talking to anyone — not just fishermen, and that comfort makes her clients also feel at ease.

Most fishermen like to tease and joke with their friends but we’re told that Kim, a jovial person, can dish it out just as well as she takes it. We also hear through the grapevine that Kim is an animal lover and does some rather strange things to keep even the lowliest animal from harm. Someone said she’s been known to pick up spiders from the floor and carry them to safety outside.

The Pike household is a busy one. With sons 19 and 16, Kim doesn’t have a lot of spare time. The family enjoys outdoor activities during all seasons and music is a significant part of the daily activity too, especially for her husband Neil and eldest son, Ryan.

Neil plays bass and Ryan is a fine drummer. Kim admits that although she is outgoing, she was shy when she was younger and is still a little bashful and while some of her family members encourage her to sing. She prefers to keep her vocalizing to herself or at least inside the four walls of home. “I don’t like people looking at me while I sing,” she says.

Known for her good work ethic, ability to work well with colleagues, coupled with her optimistic and positive outlook in dealing with any issue, Kim Pike will never have to sing for her supper.

Fishing Fatalities Continue to be Major Concern For TSB

No Replies to "The Harbour Grace Trawl Rigger"