It’s another day at work. You attach your six to seven-metre office to the back of a truck, haul it out to a wharf and launch it into the water. You’re open for business and looking for clients.

They’re looking for a face-to-face with one of the oldest groups of fish in the world; the sharks that swim the waters around Newfoundland and Labrador. These enthusiastic technicians work to improve the knowledge and understanding of sharks in local waters by conducting a shark tagging program.

Holloway is from Mount Pearl, N.L. and has been on the Marine Fish Species At Risk team for 16 years. 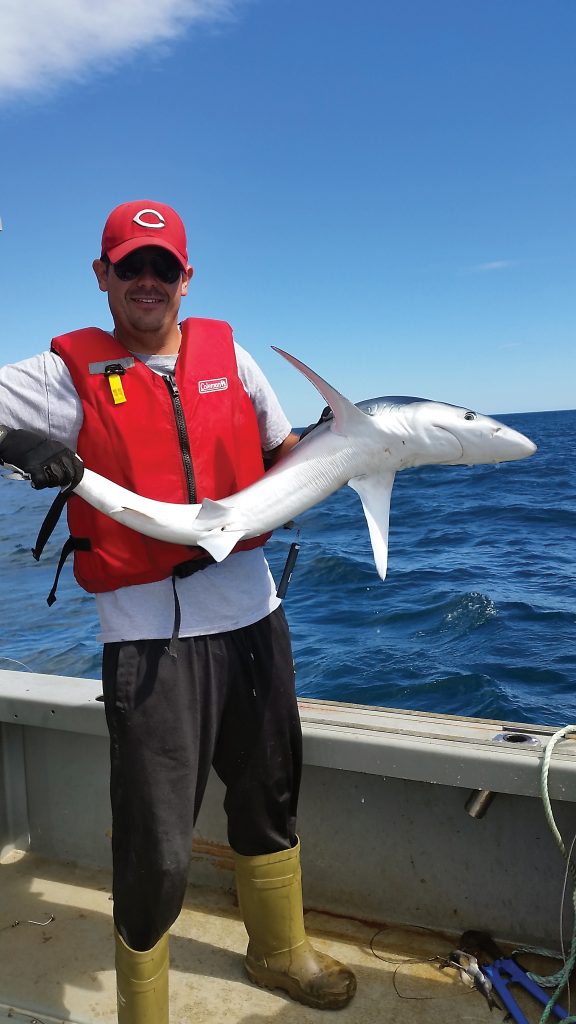 Chris Holloway and an immature female Blue shark tagged with a satellite tag and a numbered T-bar tag.

“I wanted to be a police officer and I was on a term position with DFO out in Bay D’Espoir doing an overwintering project on fish cages with salmon and steel head trout. So, I ended up giving up my future with the police to stay with DFO.”

“I was a wharf rat most of my life,” says Maddigan from Pouch Cove, N.L., a research technician with 20 years on the job.

“I hung around the wharf with everyone fishing and that kind of stuff. I trapped fish with a family up until the Northern cod moratorium in 1992. And after that, I went to trade school and got the natural resources bug which led me in this path.”

Vaters is also from Pouch Cove and says, “Crab fishing paid for my school and my student loans. So, I’ve spent most of my life fishing at sea. I knew that someday I wanted to be involved with the fishery somehow and now I’m lucky enough to be a research technician.”

A new research technician joined the team last year. Storch was raised by the sea in Sisimiut, Greenland, and her father was a Northern shrimp fisher, so she spent her summers on the water. She has a B.Sc. in biology and masters in marine studies in fisheries resource management.

After having spent some time in the marine industry and at DFO, she became a technician on the shark team in 2016.

Storch has already been out on the water and involved in multiple shark captures and tagging. She says, “It’s my absolute dream job. I think that sums it up pretty well.”

So now what? How do these researchers get their hands on sharks? Holloway says, “With a little practice.” They all laugh.

It starts with a fishy soup concoction called chum. “It’s a liquid we use to catch sharks,” says Maddigan. “And the sharks love it.”

The mixture gets set to freeze in five-gallon pails and stockpiled over the winter months so it’ll be ready to attract sharks mid-summer when the temperature of the water reaches 10-12° C (when porbeagles move inshore) and higher (blue sharks prefer +18° C water). They make about 8,000 pounds of chum for the summer months.

“It’s like clockwork,” says Holloway. “You put the chum out and it takes about two hours for the slick to get established and for the sharks to find it and hunt their way in.”

If you’ve watched the Discovery Channel and have seen tuna fishing, with the big fishing reels, that’s the gear these technicians use. They only use two fishing lines at once, because using more runs the risk of hooking two or three sharks at the same time and the lines getting tangled.

On each line, a balloon is used as a float to keep the baited hook suspended at a desired depth in the water.

“Sometimes we just notice that the balloons will go,” says Vaters. “They’ll pop and next thing you’ll see is this big dorsal fin heading towards the boat or the shark will start swimming around the boat. Then all the excitement begins.”

It’s exciting. You’re carefully bringing smaller sharks aboard the boat for tagging, while the larger six to nine-foot sharks are measured, tagged and then released beside the boat in a safe and humane way to minimize the stress the shark may experience.

“One time, Trevor, Brad and I were out in Torbay and there was chum in the water. We had one shark on the line and were hauling it in and the next thing there are three or four going around in circles just like the cartoons years ago,” laughs Holloway. “We were like, ‘we’ve got to do something. We can’t take them all on now.’”

“A Blue shark tends to fight for 15 or 20 minutes, but we could have a Porbeagle on for an hour and a half to two hours,” says Maddigan.

“When we get them in, they’ve kind of given up the fight. We put a tail rope on them to make sure their tails are not thrashing around. So, someone will have to hook the wire on one side, someone will have the rope on the other side which gives the third person the ability to do the tag and do their measurements.”

The sharks are tagged with either pop-up satellite tags, hydroacoustic tags, or standard fisheries numeric spaghetti tags. Unlike the satellite tags (or the numeric tags), for a hydroacoustic tag to function it requires a receiver. So, another job for the team is to plant hydrophones (underwater microphones) on the ocean floor so when the tagged shark swims by, a ping is emitted, which can later be downloaded and becomes part of the data that is collected. 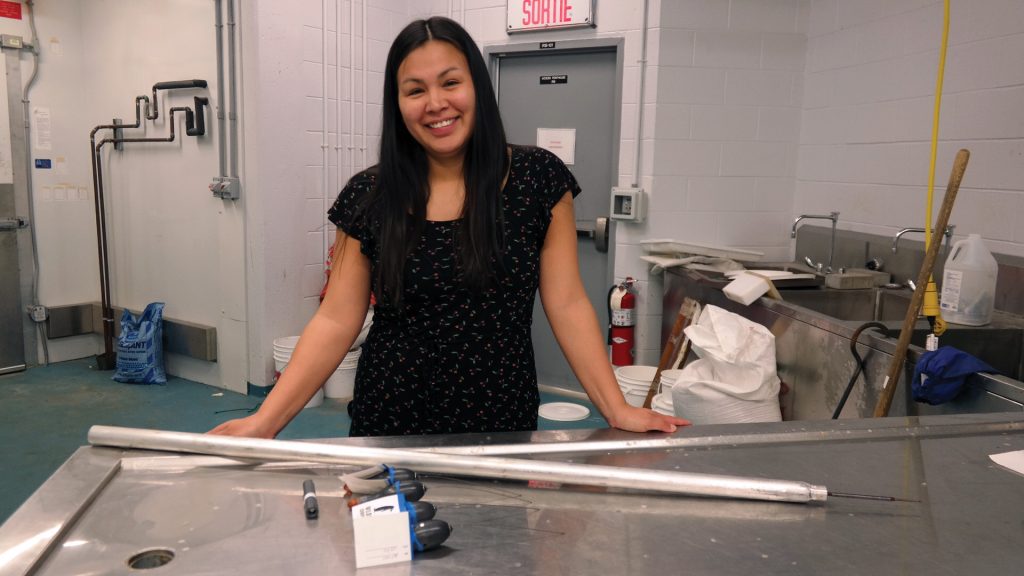 Ana Storch with the tools required for shark tagging. the thin grey tag is an acoustic tag; the ones with the antenna are the PSAT tags and the long silver pole is a tagging pole.

There is an entire network of hydrophones along the east coasts of both Canada and the United States, which can detect the hyroacoustic tags and record the presence of one of the tagged sharks.

“We monitor those hydroacoustic tags which function for five to 10 years depending on what systems and specifications we put on it. The sharks will keep the tag until the allotted time is up and then they fall off,” says Maddigan.

“To date, there have been 58 sharks tagged, 28 with satellite tags, eight with acoustic tags and 22 with a numbered spaghetti tag. Of those tagged, seven were porbeagle sharks and 51 were blue sharks.”

Ever wonder what sharkskin feels like? Well Brad Vaters knows, as he lifts up his sleeve and shows a burn mark on his arm. Sharkskin is like sandpaper.

“I’ve been burned many times and that usually happens when you’re doing the tail rope trying to keep them still while they’re thrashing. The leading edges of the fins are also very sharp.”

The shark technicians have been doing this work since 2013 and they’ve increased their knowledge from working with the sharks and also from the public they meet on the water.

“A lot of the time, we’ll go and talk to a fisherman or a recreational boater and they’ll say, ‘we just saw three sharks over that way’ and so that’s where we’re going, we’re going that way,” says Holloway. 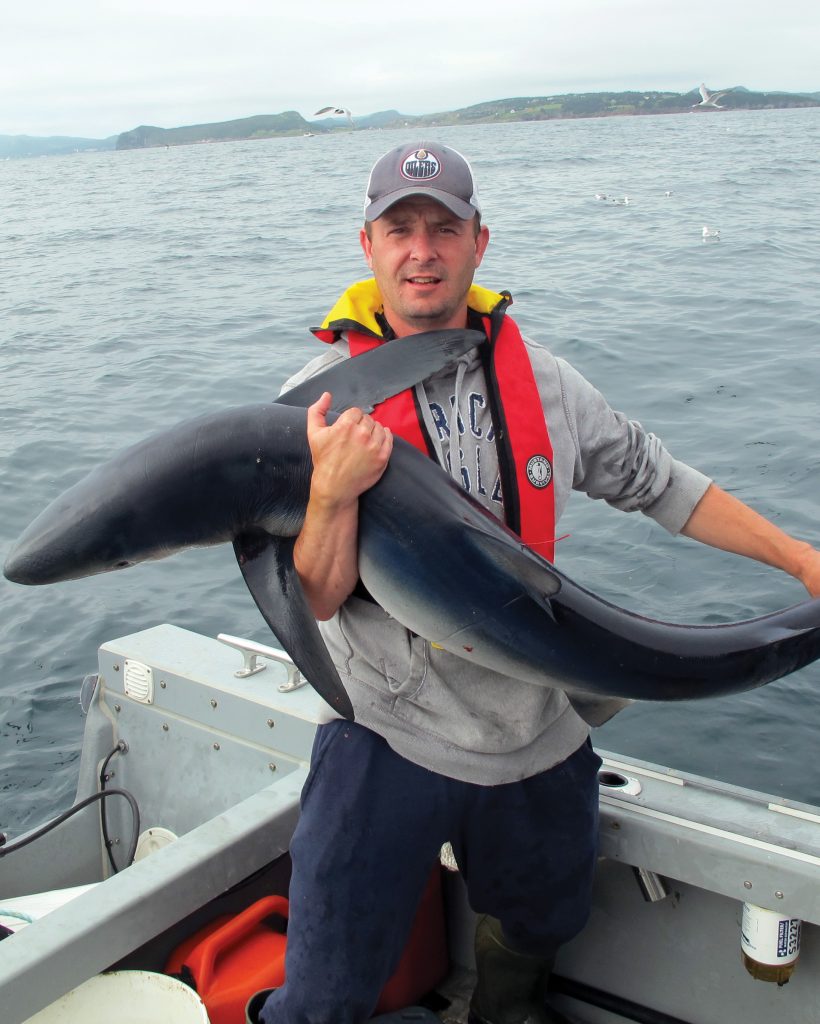 Trevor Maddigan with one of the first Blue sharks tagged in 2013, before it was gently released over the side of the boat. There is a numbered T-bar tag (red tag on top fin).

“The public is interested just as much as we are. And it all works out. When they realize that the big grey boat is a DFO research boat working on sharks, they tend to flock around and say, ‘Oh, here come the shark boys.’”

Working with and monitoring live sharks provide important data, but even dead sharks have stories to tell. These technicians pick up shark carcasses when they receive reports of them from the public and bring them back to the lab where they record information about their length, weight, age and sexual maturity. They see if any female sharks have developing pups inside, learn about the shark’s diet from their stomach contents, sample vertebrae (which is used for aging the shark) and tissues (for DNA studies).

Have you ever thought of becoming a citizen scientist? Well, the Marine Fish Species At Risk team needs your help in keeping tabs on sharks in Newfoundland and Labrador waters. 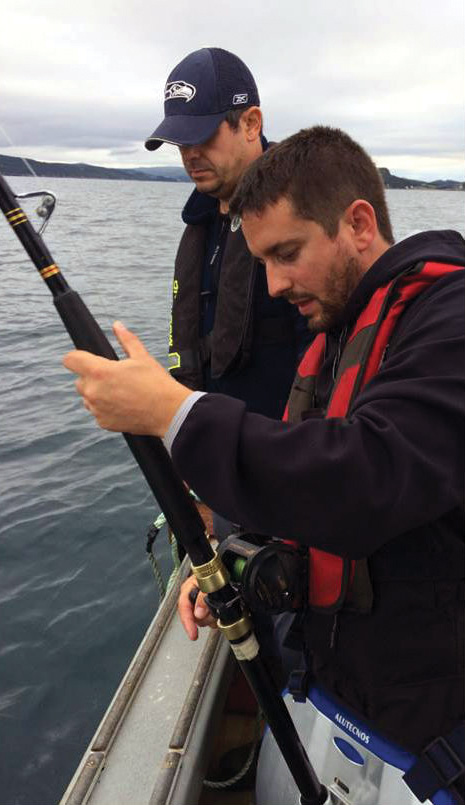 Brad Vaters (right)
prepares the rod and reel to catch a shark.

If you see a shark anywhere, even a dead shark on the beach, photograph it and let DFO know.

Some photo tips: put something in the photo to help determine scale — like a ruler, notebook, or bolt-cutters. Take a close-up photo of their belly near their anus. Males have two finger-like claspers and females don’t. Take a side shot to get their entire length and be sure to get close-ups of their large first dorsal fin and head.

Include the date and location of your sighting, and estimated shark length and species (if possible). The shark team can’t answer the phone or check emails while out in their “office at sea,” but once back at the lab, they’ll get back to you.

The Marine Fish Species At Risk team reminds everyone out on the water to carry a thick pair of gloves and bolt-cutters aboard “just in case.”

Porbeagles and Blue sharks are opportunistic feeders and will happily snack on a plump cod being retrieved on a hand line.

Safety for everyone aboard is the number one priority. Never try to bring a shark on board, always wear gloves when handling a shark, and use bolt-cutters to either break the hook in its mouth or cut the line’s leader. The shark must be released where it was caught with the least possible harm, because it’s illegal to land any shark in N.L. recreational fisheries.

“I tell people all the time that we have the best job,” says Holloway. “Our job is to bring back the data, drop them off and get back out in the field again and bring in more data. It’s interesting and I wouldn’t change it.”

No Replies to "The Shark Whisperers - Part II"