Williams, 90, passed away on October 9 at the Valley Regional Hospital, Kentville. Born in South West Port Mouton, Queens County, he was a son of the late Kenneth and Alberta (Daury) Williams. He was an engineer for the Department of Fisheries and Oceans for 30 years. Prior to his career with DFO, Loraine fished for Swim Brothers out of Lockeport.

Frausel, 85, passed away at home on October 27. Born in Liverpool, Queens County, she was a daughter of the late Stillman and Roseanna (Fisher) Williams. Anita was employed for many years at White Point Lodge before going to work at C.W. McLeod Fisheries Ltd., where she worked for 18 years, up until its closing.

Swim, 88, passed away recently at the Roseway Hospital. He was born in South Side on June 26, 1930 and was the son of the late Howard and Helena (Nickerson) Swim. He was a fisherman all his working life catching lobsters and groundfish. Swim and his cousin Melvin Swim were the first fishermen on Ellenwood’s Island to replace the wooden pot hauler with an iron head. At one time, fishing alone, he caught 10,000 pounds of pollock and dressed them all himself.

Potter, 38, passed away at the Queens General Hospital on September 29. Born in Burk’s Falls, Ontario, she was a daughter of Beverley Jones and Peter Livie. She was known as a hard worker, having worked for Mersey Seafoods, Atlantic Pacific and Blue Wave Seafood, all at the same time.

Robicheau, 96, Yarmouth, passed away on October 9 at the Yarmouth Regional Hospital. Born May 24, 1922 in Yarmouth, he was the son of the late Ernest and Lena (Deveau) Robicheau. He was a veteran of the Second World War and worked for Sweeney Fisheries most of his life.

Hushard, 75, passed away at the Roseway Hospital on October 13. Born in Shelburne, he was a son of the late James Edward and Doris (Clow) Hushard. He was a fishing captain for his entire working career.

Cottreau, 85, passed away on October 14 at the Yarmouth Regional Hospital. Born May 7, 1933 in Wedgeport, he was a son of the late Frank and Hilda (Boudreau) Cottreau. He was a retired lobster and scallop fisherman who was well respected by his fellow shipmates and served as a mentor to many of them.

Walker, 70, passed away on October 17. Born in Inverness, he was a son of the late John Dan and Margaret Christine (Nicholson) Walker. He was a well-known lobster fisherman and a man who liked to take on many projects from welding to building homes.

Jackson, 75, passed away on October 3 at the Inverness Consolidated Memorial Hospital. He was born on October 13, 1942, to parents John and Valencia Jackson, Ingonish. He was a lobster fisherman for many years and was always ready to help others and often volunteered his time to help with Search and Rescue when help was needed.

Luddington, passed away on October 7 at home. Born in New Harbour, he was a son of the late John C. and Maude (Henderson) Luddington. He was a lifelong inshore fisherman and worked as foreman for Tidewater Construction Company.

The TriNav Group of Companies was recently awarded the Employer Appreciation and Recognition Award by the Association of Engineering Technicians and Technologists of Newfoundland and Labrador (AETTNL). This award recognizes outstanding technical achievement by employers of technology professions in Newfoundland and Labrador. The basis of this award may be a single, exceptional accomplishment or a long record of continuing excellence. Activities must be worthy of the designation “outstanding” in their contribution to technology in Canada. 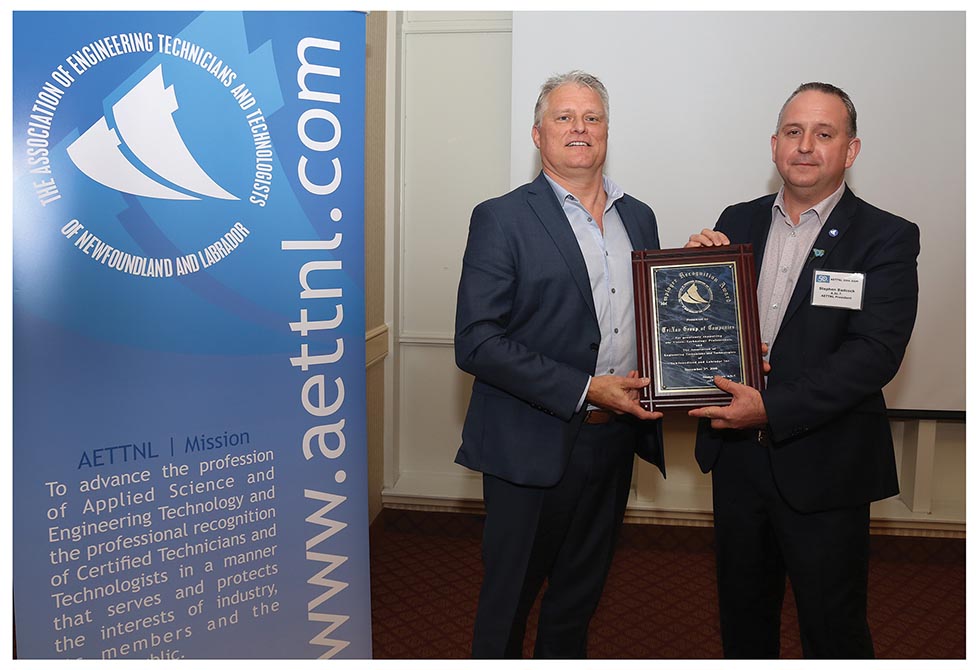 AETTNL is an organization that represents the interests of technicians and technologists in Newfoundland and Labrador. It currently represents more than 1,200 technical professionals in the province. Its members work in all of the major areas of the economy in both the private and public sectors.