Drake, 48, passed away tragically on December 15, 2020. He was crewmember on the scallop dragger Chief William Saulis that went down in the Bay of Fundy.

Vokey, 91, passed away on January 27 at home surrounded by his family. He was born in Little Harbour, Trinity Bay on October 6, 1929. He started boatbuilding at a young age, the start of a lifelong passion. At the age of 34, he built a 45-foot vessel, the Bonnie & Florence and moved his wife and then 12 children and relocated to Trinity in Trinity Bay. Henry’s strong work ethic, his passion for boat building, along with his quiet devotion and strong sense of responsibility to his family, made him strive to perfect his craft, which he did and became one of Newfoundland and Labrador’s most renown master boatbuilders. In 2007, he received The Order of Newfoundland and Labrador. In 2008, he was made an honourary lifetime member of the Wooden Boat Museum of Newfoundland and Labrador. In 2012, Henry was inducted into the Atlantic Canada Marine Industries Hall of Fame for his contribution to marine industries. In 2013, he was awarded with an honourary degree from Memorial University of Newfoundland and Labrador. Henry was also featured in a documentary filmed by Spring Water Production entitled, One Last Schooner; the boat building genus of Henry Vokey. Henry was also the subject of two CBC Land and Sea productions, Wood or Nothing in 2009 and One Last Schooner in 2021. The episodes followed the building of his last schooner, the 43-foot Leah Caroline, named after his youngest great-granddaughter and his wife.

Pilgrim, 74, passed away on January 5. He was born on March 21, 1946 to Cecil and Eliza (Hedderson) Pilgrim in Noddy Bay. As a young boy he moved with his family to Main Brook. He worked with Bowaters until it ceased operation in Main Brook. He then went fishing. He enjoyed working in the woods, being out in boat, sealing and fishing.

Hedderson, 95, passed away on December 26, 2020 at home. She was born on February 22, 1925. She worked as a housekeeper in the early years and retired from fishing around age 61. She enjoyed the outdoors and spent a lot of time in the woods, gardening and berry picking. She also enjoyed knitting, crocheting, sewing and mat hooking.

Moores, 92, passed away on December 19, 2020. He was born in Blackhead, Conception Bay, Newfoundland on November 7, 1928, the youngest of six children to Elizabeth Puddester and Oscar Diamond Moores. In 1943, the family moved to St. John’s where he entered the Prince of Wales College in Grade 10 and graduated in 1945, winning the DUX Medal. He went to work in the Bank of Montreal in the St. John’s, Curling and Corner Brook branches. In 1952, he resigned from the bank and joined his brother Alec at North Eastern Fish Industries, Ltd., Harbour Grace, Newfoundland. In 1953, the company assigned him to Boston to open a sales office in the Park Square Building to import and sell frozen fish slabs (now referred to as cod blocks), used in the production of fish fingers (fish sticks). He then moved to Gloucester. The imported frozen fish slabs came from Canada aboard bulk frozen cargo vessels and were discharged originally in Boston. It became increasingly more difficult to find space in Boston Harbor for handling the vessels, so Gloucester was identified as a possible port. In 1954, he hired Charles H. Pew of Gloucester, Massachusetts who was well acquainted with Gloucester and in April 1954, the M/V Seneff delivered the first cargo of frozen fish to discharge in Gloucester. Discharge of the vessels was under the leadership of Charlie Pew and Gloucester Stevedoring Company was formed to support this growing business. This new business stimulated the commercial development of wharves and cold storages in Gloucester which remain active today. In 1960, Carl joined the firm of F.W. Bryce, Inc. of Montreal, representing the frozen fish production of Newfoundland producers, including North Eastern Fish Industries. Later, Carl was joined by Michael J. Burke, former senior manager with Quincy Market Cold Storage. Mike Burke’s cold storage expertise encouraged Carl to build a cold storage facility for his expanding business, which remains the headquarters of F.W. Bryce, Inc. When sons Ian and Keith graduated from college, they joined the family business and continue their involvement to this day. As Gloucester became the most important port for frozen fish from the North Atlantic, ships arrived with cargo from the Faroe Islands, Norway, Scotland and Denmark. The Copenhagen Reefers fleet of ships were servicing this trade and Gloucester Stevedoring Co. handled them exclusively. The Danish crews often required assistance when in port and Carl provided everything from hosting Christmas dinners to hospital visits. In recognition of his humanity in this regard, he was appointed by the Danish Consulate of New York, representing the Prince of Denmark, as the Honorary Assistant Danish Consulate for the New England Region. He held this distinction to the highest honour.

Roberts, 58, passed away unexpectedly at sea on December 15, 2020. Born on December 10, 1962 in Boston, Mass. and raised in Yarmouth, he was a son of the late Charles “Chuck” and Mable (Allen) Roberts. His second home was the ocean. Since the age of 14, he has proudly fished the great seas with determination. Better known as “Hot Dog,” he was said to be the best left-handed shucker with the most unique technique anyone had ever seen. Over his many years of fishing, he had taken many young men under his wing, showing them the ropes. Although he did leave the fishing industry for two years to work in British Columbia, his love for the sea brought him back home.

The Surettes, 66 and 69, passed away together near the camp they loved and the place that brought them both so much peace. Born on June 10, 1954 in Wedgeport, Noreen was the daughter of Anne (Clairmont) Muise of Wedgeport and the late Joseph Arthur Cottreau. She was a homemaker, having also worked as a fish processer and housekeeper. In her spare time, she enjoyed volunteering and was part of La Club Social des Îles, however, her true passion was painting. Kenneth was born on February 2, 1951 in Morris Island, a son to the late Luxime and Therese (LeBlanc) Surette. A hard-working outdoorsman, he fished in the scallop and lobster industries and also did some rock weeding. He loved hunting, served on St. Joseph’s Church Council and was a member of the Knights of Columbus, Council 8988, Tusket.

Goulden, 88, passed away on January 23 at the Roseway Hospital in Shelburne. Born on February 7, 1932, he was the son of the late Merton and Alveda (Perry) Goulden of Ingomar, where Carl lived most of his life. He was a fisherman/lobsterman all of his life.

Newell, 72, passed away on January 5 at the Roseway Hospital. Born on November 22, 1948, he was a son of the late Marshall and Beatrice Newell. He was known as a hard worker, starting his career at a very young age, picking apples in the Annapolis Valley and eventually moving on to work for G M Newell Ltd., cutting wood for Gene and Leigh and also worked for Cyril Swim at Island Lobster. He also worked piece work for J&J Nickerson, Connor Brothers and CSI Co-Op. His second family was the management and staff at Sea Star Seafoods where Murray worked up until two weeks before his passing.

Prime, 52, formerly of Yarmouth, passed away on January 4 at the QEII (VG Site) in Halifax. Born in Yarmouth on November 25, 1968, he was the son of George Wallace and Sally Prime. He worked at Acadian Sea Plants, after working many years as a house painter with his father.

Saulnier, 74, passed away on January 11 at the Yarmouth Regional Hospital. During his working years, Roy enjoyed his time working in fish plants in Yarmouth.

Cunningham, 55, passed away on December 30, 2020 at home. Born on April 2, 1965, he was the eldest son of his parents George and Patsy (LeBlanc) Cunningham. He was a fisherman most of his life up until the last 15 years when he started working for his brother Darren in the lobster bait industry.

Brannen, 77, formerly of Stoney Island, passed away on January 5. Born on February 10, 1943, he was a son of the late Joseph and Mattie (Penney) Brannen. He worked his entire life at several fish plants on Cape Sable Island.

Baker, 83, passed away at home on January 13. Born in East Jeddore, he was a son of the late Earl and Stella (Jennex) Baker. He built his life around the ocean. He followed in his father’s footsteps and was a fisherman all his life. He owned several boats throughout his lifetime, but the ones that captured his heart were the Shirley L the 1st, the 2nd and Miss Gabarus. Even after retiring from his fishing career at 62, he got a smaller boat and continued to hobby fish mackerel and trout for many years. He was proud to see his sons, Ronnie and Jimmy and grandsons, Jason and Derick follow in his footsteps and pursue their careers at sea.

Schoots, 58, passed away on January 24 at the Yarmouth Regional Hospital. Born in Ottawa on March 6, 1962, he was a son of the late Peter and Margaret (Ecker) Schoots. He worked for the Canadian Coast Guard for over 31 years and even went on a history-making expedition to the North Pole for scientific experiments on global warming.

Miller, 74, passed away on December 23, 2020 at the Yarmouth Regional Hospital. Born on August 10, 1946 in Yarmouth, he was a son of the late Lawrence and Margorie. During his working years, he worked as a cook aboard one of Comeau Sea Foods scallop boats.

Stewart, 55, passed away on December 22, 2020. He was born on August 8, 1965 to Murray and Elaine (Atwood) Stewart of Shelburne. He worked most of his life in boat building, something he took great pride in and loved doing and missed it after not being able to work any longer.

Icewater Seafoods fish plant worker Hubert Warren recently celebrated his 50th anniversary working in the Arnold’s Cove, N.L. plant. He started working there on February 1, 1971. His first day was in the old plant which was located by the community wharf. In 1979, he moved to the new plant, which is the same facility he works in today. 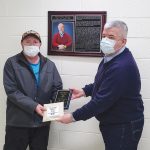 “In his 50 years at a plant focused on working nearly year-round, Hubert may have handled more fish than anyone else in the fishery in Newfoundland and Labrador,” says Icewater Seafoods President and CEO, Alberto Wareham. “Hubert is quiet and modest. He is a hard worker. I know my late father, Bruce Wareham, valued Hubert’s commitment to his job and I share that appreciation. We’re really proud of his 50-year milestone and thank him for his dedication.”

Hubert has witnessed and been part of an evolution of technology that he could not have imagined in 1971. That year, technology news around the world included innovations like the availability of pocket-sized calculators. In 2021, he works in a fish plant where x-ray vision and water jets remove bones and portion cod fillets. While he has seen many changes over the years, Hubert says he’s fortunate to have worked with many of the same people over his 50 years in the plant.

While he is the longest-standing employee, he has many colleagues with impressive anniversaries of their own. There are 17 employees have been working at the plant 40 years or more. Hubert has four siblings working at Icewater Seafoods, two brothers and two sisters. Together, they’ve worked 189 years at the Arnold’s Cove plant.