Hurley, 94, passed away on August 25 at Roddickton House in Roddickton, N.L. He was born on March 14, 1926 but due to error his birth was listed as 1927, He was the only son born to James and Rebecca Hurley of Westport along with his sister Sarah. He moved to Ship Cove as a very young boy with his family and lost his father James shortly after. He worked as a fisherman and in the lumber woods for most of his working life. He also worked in carpentry, and enjoyed working with his hands making figures and boats with wood and other materials which he sold or gave to family, friends and those who just stopped by.

Williams, 82, passed away on August 18. Born on April 26, 1938, he was a son of the late Colin and Martha (Firth) Williams. He had a variety of jobs throughout his working career, including lobster fishing with his brother, working at Shelburne Woodworkers and working at the Ven-Rez manufacturing facility in Shelburne where he worked to manufacture educational and library furniture. In later years, he transitioned his career to the manufacturing of fibreglass boats and gear for the fishing industry in Nova Scotia.

Rice, 67, passed away on August 18 at his residence in Newville. He was born on Black Island to Stewart and Matilda Rice on December 20, 1952. He worked at the Twillingate fish plant for 42 years.

Gilkie, 62, passed away on August 2. He was the son of Stewart Alan and the late Muriel Florence (Hart) Gilkie. He spent his early days working in electronics and fisheries, then moved on to working with computers, and eventually settled at Oceaview Fisheries whom he came to think of as family.

Nickerson, 30, passed away on August 27. Otherwise known as “Little Greg,” he was born in Yarmouth on January 19, 1990. He was a fisherman at heart and took pride in all of his work.

Nickerson, 89, passed away on August 10 at the Yarmouth Regional Hospital. Born on May 19, 1931, he was a son of the late Thomas and Almeda (Brown) Nickerson. He was a jack-of-all-trades and would use his self-taught skills of electrical and plumbing while he worked for Wilson’s and Sears. Most of his career was spent on the sea as captain of his own boat and he retired as a fisherman.

Corporon, 83, passed away on August 24 at the Yarmouth Regional Hospital. Born on September 26, 1936 in Wedgeport, he was a son of the late Willie and Frances (Robichaud) Corporon. He was a lobster buyer for R & K Murphy, having also worked for Chester LeBlanc and A. L. LeBlanc.

Deinstadt, 81, passed away on August 8, 2020 at the Yarmouth General Hospital. He was the youngest of five children born to the late Clarence and Bertha (McKay) Deinstadt. He was a fisherman all of his working life and took great pride in his fishing boats, as with everything he did. His 32-foot wooden boat, Annie F. II, was on display for many years as a tourist attraction at the Visitors Centre in Barrington.

Atkinson, 80, passed away on August 7. Born on September 14, 1939 at North East Point, Cape Sable Island to Charles and Helen (Nickerson) Atkinson, he was the eldest of eight children. He worked at Scotia Marine Products for 32 years, retiring from a foreman position in 1990.

Smith, 101, passed away on August 3 the Bayside Home in Barrington. Born in Stoney Island, Shelburne County on April 11, 1919, he was a son of the late Johnny and Ida (Chase) Smith. He worked most of his life in the fishing industry. He was in the army in Halifax during the war providing harbour defense. He also worked on lake boats in Ontario for several years providing for his family. Selling cars for a dealership in Liverpool was a part-time interest as well, just part of his working career, but he retired as a fisherman.

Ingram, 89, passed away on August 8 at the Halifax Hospice. He was born in Boston, Mass. on May 6, 1931. At three months of age, he arrived in Saint John, N.B. where he grew up and went to school. He graduated from Rothesay/Netherwood School in Rothesay, N.B. in 1950. He attended UNB before joining the Federal Department of Fisheries and Oceans in Saint John. In 1961, Jack and family were transferred to Halifax. In 1962 they moved to Dartmouth, where they still reside.

Smith, 62, passed away on July 31. He spent much of his working life at Sable Fish Packers as a forklift operator, as well as in the departments of lobster and salt fish. He absolutely loved working there with the crew and his supervisors.

Crowell, 57, passed away on July 29 at the QEII Halifax Infirmary. Born on June 24, 1963, he was the son of Ruthie Crowell and the late Donald Crowell. He started his fishing career at the young age of 15. He loved the water, it was in his veins.

Mooers, 89, passed away on July 26 at home. Born in Milton, he was a son of the late John and Bertha (Crouse) (Mooers) Mino. He worked at the Mersey Wood Camps in his younger years and worked at the naval dockyards in Halifax for a time. He also worked onboard several fishing vessels as a deckhand and as a cook.

O’Hanley, 76, passed away on August 25. Born in Yarmouth, he was a son to the late James and Myrna O’Hanley. He was a fish plant worker during his working career.

Walker, 84, passed away on August 9 at the Yarmouth Regional Hospital. Born in Liverpool, England, he was a son to the late George and Alice (McConville) Walker. He started his working career as a welder, then went on to be the Manager of Lawrence Sweeney Fisheries.

Irwin, 96, passed away on July 28 at the Roseway Manor. He was born on October 14, 1923 to Helen (Purney) and John Irwin. He was a fisherman all his life and enjoyed being on the water.

Atkinson, 62, passed away on August 11. He was born in Wedgeport on February 15, 1958 to Margaret Atkinson and the late Felton Atkinson. He was a fisherman for all of his working life aboard the Joseph & Claude. He was also involved in the scallop fishery on the Muktuk until 2007. 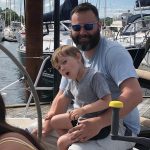 Ocean Yacht Sales recently welcomed Michael Carey onboard as its new Manager/Yacht Broker. Michael is a veteran of the hospitality industry in Nova Scotia, having held leadership roles with several organizations for nearly two decades. For the last 10 years, he held the high-profile position of General Manager and Director of Operations with the Halifax-based Legendary Hospitality. A lifetime sailor, Michael has spent every summer of his life around boats in one way or another. Michael is proud to be now working with Ocean Yacht Sales as its Manager/Yacht Broker and is looking forward to using his years of sailing and marine experience to help his clients choose the right pleasure boat that suits their needs. When not working or on the water, he can be found spending his time with his wife Emma and their two kids, Finnegan and Isla.

Loveless, the MHA for Fortune Bay – Cape La Hune, was recently appointed to the Newfoundland and Labrador Cabinet by Premier Andrew Furey. He is originally from Seal Cove, Fortune Bay. His path to government included community service, commerce and business-related work experience and several years of post-secondary education in business administration and public administration. Loveless was first elected to the House of Assembly on May 16, 2019 and on August 19, 2020 he was sworn in as Minister of Fisheries, Forestry and Agriculture.

Ocean Choice International (OCI) recently announced that Rens Elderkamp is joining the company’s sales team as the Managing Director of its European Operations. He brings over a decade of seafood sales and marketing experience that will complement Ocean Choice’s existing European sales force and market expansion activities. He will join Ocean Choice in October 2020. Elderkamp has spent the last decade working with various seafood companies in Europe where he has developed a strong knowledge of the market. He is known in the industry for his ability to build long-lasting and mutually beneficial relationships with partners. Over the years, Elderkamp has held various sales and purchasing positions with Anova Seafood and most recently he was employed at Sligro Food Group as the Purchasing and Category Fish Manager. OCI is vertically integrated, harvesting, processing and marketing seafood on its fleet of six offshore vessels and five processing facilities. The company has sales offices around the world, including an office in the United Kingdom and satellite offices in the Netherlands and Italy. OCI currently sells a diversified range of species in 17 countries in Europe, including cooked and peeled shrimp, frozen-at-sea shrimp, scallops and a variety of groundfish species to a range of customers.