Mitchelmore, 75, passed away on August 20. He was born on October 10, 1945 in St. Anthony to Guy and Maisie Mitchelmore. He served in the Canadian military with the Black Watch Regiment in Cyprus from 1965–1968 as a part of the United Nations peace keeping forces. After serving his country, he returned to Newfoundland to work as a professional fisherman. In the late 1980s, he worked as a hunting and fishing guide with Tuckamore Lodge until he retired in 2011.

Courtney, 69, passed away on August 3 at the Buchanan Memorial Hospital, Neil’s Harbour. He was born on March 23, 1952 in Burnt Islands, Newfoundland and was the son of the late Robert and Sarah (Hardy) Courtney. He loved to be on the sea, from his early steamship days to his later years commercial fishing. He was a founding member of the North of Smokey Fishermen’s Association, advocating for local fishing and making great friends along the way.

Bourgeois, 90, passed away on July 25 at the Sacred Heart Community Hospital in Cheticamp. He was the son of the late Simon D. and Rose (Chiasson) Bourgeois. He was a long-standing advocate with the Cheticamp Fishermen’s Co-op. His love of the ocean was well understood by all who knew him as he was a fisherman for most of his life, after leaving the life of a miner in New Waterford behind to begin his journey back to Cheticamp.

Loomis, 66, passed away on August 14. He was born in Great Brehat on May 7, 1955 to Victor and Bertha Noble. He fished all his life, from small boats to offshore trawlers, until 2018, when he took ill and had to finish with the fishery.

Stewart, 72, passed away on August 27. He was one of eight children of the late Eldridge and Althine Stewart. He was a fisherman and spent many years scalloping, lobstering, trawling, as well as fishing for tuna.

Nickerson, 85, passed away on August 21 at the Yarmouth Regional Hospital. Born in Woods Harbour on Dec. 3, 1935, he was the son of the late Havelock and Maude Nickerson. His passion was fishing from a very young age of 14 until he stepped off the boat at the age of 82.

Newell, 63, passed away on August 7 at the Yarmouth Regional Hospital. He was born and lived on Melbourne’s Lane in Newellton his entire life. He was the son of the late Cecil (Gab) Newell and Annette (Banks) Smith. He was a very hard worker and fisherman his entire life and loved what he did and never considered it work.

Messenger, 92, passed away on August 15 at the Surf Lodge. He was born in 1928 to the late Kenneth and Florence Messenger. He began lobstering at the age of 14 and soon gained the reputation of a determined worker. He carried out his work with a twinkle in his eye until he was convinced to give up the wheel at the age of 79. Even then, he kept busy working on rope and helping family and friends in any way that he could.

Nickerson, 75, passed away on July 27 at the Saint John Regional Hospital, Saint John, N.B. He was born on October 26, 1945 in Argyle Sound, to the late John and Marion (Hamilton) Nickerson. He started his working career as a lobster fisherman, but in the late 1970s happened upon aquaculture. He became an integral part of the operations of Finives of Nova Scotia, Ocean Organic Ltd., establishing a fish hatchery and commercial smoker for farmed Atlantic salmon as well as other species. Until his retirement, he continued the smokehouse operations, diversifying the product offerings as required.

Rudolph, 61, passed away on August 17 at the QEII Health Sciences Centre, Halifax. Born on Feb. 5, 1960 in Sherbrooke, he was a son of the late Ernest and Catherine (Green) Rudolph. He was a long-time employee of Howard Turner and Son’s Ltd. and in later years worked as a lobster buyer for By the Water Shellfish, P.E.I., and Love Me Fish & Lobster Inc., Bayfield, in the village of Marie Joseph. Through his years in the lobster industry, he was very well known and respected by many lobster fishermen up and down the eastern shore.

Robicheau, 74, passed away on August 8 at the Yarmouth Regional Hospital. Born on February 2, 1947 in Yarmouth, he was a son of the late John Charles and Viola (Beals) Robicheau. He worked as a lobster fisherman and went on to work aboard the MV Bluenose.

Link, 27, passed away on August 1. He was born on February 12, 1994. He was a graduate of BMHS and NSCC in Yarmouth and then he joined his dad in the fishing industry.

Snow, 69, passed away on July 4. He was a son of the late John Snow and Jean Charlotte (MacDonald) Snow of Fall River. He spent many years of his life at sea working for the Bedford Institute of Oceanography, Dome Petroleum and Zanen Verstoep. He was fortunate to have experienced many different parts of the world, from Tuktoyaktuk to Singapore and numerous countries in between. He always had a great story to tell from every port, especially Newfoundland, where he obtained most of his tattoos after a night at Paddy’s Inn.

Newell, 78, passed away on July 30. Born on December 13, 1942 at Swim’s Point, he was the son of the late Milton Allison Newell and the late Freda June (Smith) Newell. He was a lobster fishing captain for over 50 years and was one of the best Irish mossers ever. He started mossing at age 14 and he continued for over 45 years.

Poole, 86, passed away on August 17 at the Yarmouth Regional Hospital. Born in Yarmouth, he was a son to the late Donald and Viola Poole. He was a very successful fisherman all of his working life.

Born in Halifax, Nova Scotia, he was raised in a military family and grew up on military bases in Summerside, P.E.I., Trenton, Ontario and Comox, British Columbia before the family ultimately returned to Nova Scotia for his father’s retirement posting to Shearwater. He attended Saint Mary’s University where he obtained a Bachelor of Commerce. He then earned his Chartered Accountant designation in Halifax. After graduation, he moved to Bermuda where he worked with both Deloitte and in the reinsurance industry. In 2007, knowing that he wanted to raise his children closer to extended family, he returned to Nova Scotia and has lived in Pictou County ever since. He successfully sought the Pictou East PC nomination in 2012 and was first elected to the Nova Scotia House of Assembly in the 2013 provincial election. He was re-elected in 2017 and again in 2021. In 2018, Tim was elected Leader of the PC Party of Nova Scotia. He was sworn in as premier on August 31, 2021.

He was first elected to the Nova Scotia House of Assembly for Sackville-Cobequid in a by-election in 2019 and was re-elected in 2021. He was elected to the Halifax Regional Municipal Council to represent District 15, Lower Sackville, in 2012 and was re-elected by acclamation in 2016. He has served on the Boards of Destination Halifax, Nova Scotia Trade and Convention Centre, Lake District Recreation Association, Canadian Cancer Society, Cobequid Community Health Centre Foundation and HRM’s Board of Police Commissioners. He retired after a 30-year telecommunications career that began with MT&T in 1975.

Keith Sullivan and Robert Keenan have been re-elected to the top elected positions of FFAW-Unifor. Also unopposed was Tony Doyle, Vice-President of the Inshore division of the Union and the Industrial/Retail/Offshore Vice-President, Doretta Strickland. Below is a full list of candidates and their election positions. The new Executive Board will be installed at the Union’s Triennial Convention, scheduled for November 22–25 in St. John’s, NL. 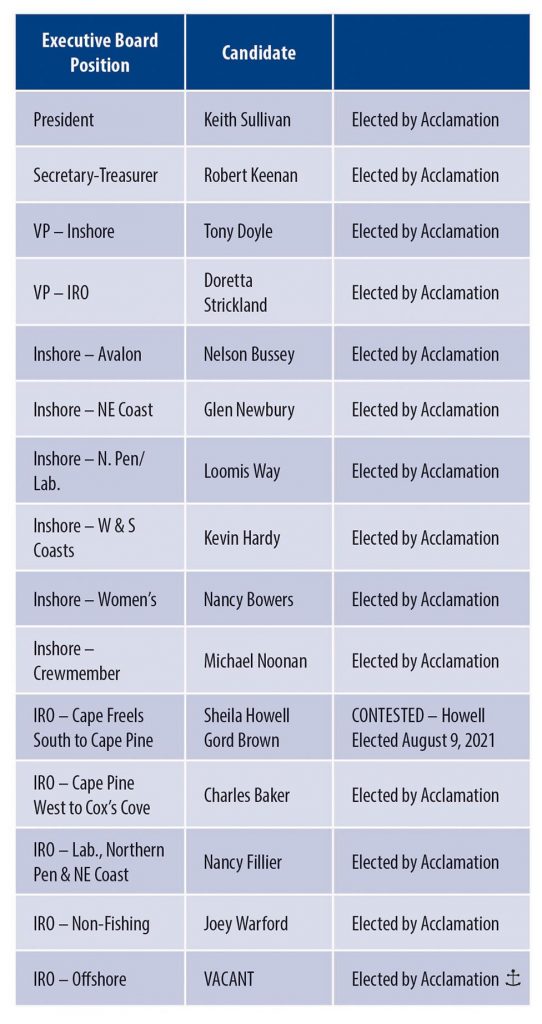