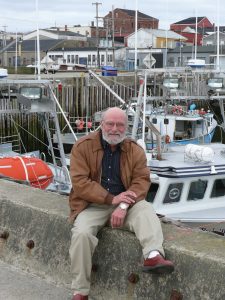 Meuse, 75, passed away peacefully on August 5, 2017, with family at his side. He was born in Amirault’s Hill and was a long-time resident of Yarmouth. He was the son of the late Lévi and Antoinette (LeBlanc) Muise. Meuse studied at Ryerson University in Toronto and spent over four decades as a Yarmouth area print journalist up to his retirement, writing for the Yarmouth Herald, Vanguard, Sou’Wester and numerous other publications. He continued to write monthly articles for The Navigator for another decade, right up until the week of his passing. He was well read and could talk to anyone on most any topic. He had a passion for reading (loved his books and sharing them with others) and cooking (he could make a mean rappie pie) and photography (loved to take and share his pictures). He was a natural athlete, having played football at Ryerson (hadn’t picked up a football in his life), baseball (excellent pitcher and batter), hockey and in later years took up the sport of golf, which became his newest passion, at which he once again excelled. He loved the outdoors and his annual fishing and hunting trips with his buddies (for which he claimed himself the chef whether they liked it or not). He will be greatly missed by his family, his golfing, fishing and hunting buddies, his colleagues at The Navigator and his many other friends who have endless stories of friendship and fun times to tell.

Howlett, 59, passed away July 10. Born in Lunenburg, N.S., he was the son of the late Jim and Jean (Slauenwhite) Howlett. Howlett was a longtime resident of the Island, working worked as a commercial fisherman and had a passion for the sea. He died freeing a whale from deadly fishing gear off eastern New Brunswick — something he loved doing. Howlett had helped rescue about two dozen whales over the last 15 years.

Ellsworth, 82, passed away July 2 at Curtis Memorial Hospital in St. Anthony. He was born to Thomas and Jessie Ellsworth on April 21, 1935 in Englee. He made his living by working in the woods, fishing and working in the fish plant as a cutter.

Simms, 77, passed away June 2 in St. Anthony. She was born March 20, 1940 to Flossie and George Macey of Red Bay, Labrador. At the age of 16, she moved to St. Anthony to work with the Grenfell Mission and later went to work with Fishery Products until she retired in 1991.

Burns, 28, passed away July 25 at the Sacred Heart Community Health Centre, Cheticamp, with his family by his side. Born in Cheticamp on March 31, 1989, he was the son of Raymond Burns (Louise) and Bernice Poirier Burns (Gussy) and younger brother to Christopher. Casey graduated from CBHA in 2008 and became a fisherman alongside his dad having shown an interest in it since the early age of 13. In July 2014 his illness forced him to stop doing what he loved best.

MacArthur, 76, passed away on July 31 at the Inverness Consolidated Memorial Hospital. Born July 21, 1941, in Inverness, Cape Breton, he was the son of the late Christine “Christy” (Smith) and Duncan MacArthur. He worked on many job sites in various positions, eventually finding his passion, fishing. He set the bar high and was a mentor to many, including his three sons, on how to be a successful lobster and crab fisherman. His love of the water was passed on to his whole family, many who had the honour to work alongside him on the boat.

Doucette, 84, passed away on July 12 at the Yarmouth Regional Hospital with his family at his side. Born November 14, 1932 in Wedgeport, he was a son of the late Jim and Lucy (Surette) Doucette. He made his living in the fishing industry and had a great love for the sea. He worked as a lobster fisherman and as a fish cutter, but he was especially fond of his time spent as a sword fisherman.

Bond, 90, passed away July 10. Born in Halfway Cove, Guysborough County, he was the eldest son of 17 children born to the late Clarence and Minnie (Delaney) Bond. He worked at different jobs, until the early 1950s, when he started working at Acadia Fisheries, Mulgrave, where he became foreman of machine maintenance. In 1968, after moving back to Philips Harbour, he worked for Acadia Fisheries, H. B. Nickerson and National Sea Products in Canso, until he retired in 1990.

Belliveau, 86, passed away July 31 at the Yarmouth Regional Hospital, surrounded by his family. Born on June 13, 1931, he was a son of the late William and Allie (Nickerson) Belliveau. He had been a commercial fisherman by trade his entire working life.

Nickerson, 74, passed away on July 29 at the QEII Hospital surrounded by his devoted family. Born October 30, 1942 in West Head, Cape Sable Island, he was the son of the late Thomas and Helen (Smith) Nickerson. He was an owner and operator of J & J Nickerson Fisheries at the West Head Wharf for 47 years where he worked as a fish and lobster buyer. He maintained his presence at the wharf after retirement and was often seen manning the hoist and cooking various meals for the fishermen and crew.

Goodwin, 74, passed away after a courageous battle with cancer on July 14 at the Yarmouth Regional Hospital. Born March 23, 1943, he was the son of the late Cecil and Myrtle (Nickerson) Goodwin. He was a fisherman most of his working life.

Newell, 84, passed away July 13. He was born February 14, 1933, on the west side of Baccaro, N.S., to the late Foreman and Mildred (Brennan) Newell. As a young child, he was burdened with tuberculosis of the hip, which left him bedridden from ages 3-7. He taught himself to read and persevered with the limited use of one leg. He went on to be a successful fisherman, raised a family and then became a fish buyer for SilverFin Fisheries.

Randall, 70, passed away peacefully on July 8 at the Yarmouth Regional Hospital. Born December 16, 1946 in Halifax, he was a son of the late Edward Sr. and Constance (LeBlanc) Randall. He served with the Royal Canadian Navy for 22 years, after which he worked as a stationary engineer with IMO Foods in Yarmouth until his retirement.

Nickerson, 74, passed away on July 7 at the Yarmouth Regional Hospital. Born in Argyle on December 5, 1942, he was the son and fifth child of the late Leslie and Erma (Murphy) Nickerson. He put his welding skills to use and opened a blacksmith’s shop where he made moss rakes. He became renowned for these skills and people came from far and wide to get a Lloyd Nickerson moss rake. He also fished with some of the older fisherman of Forbes Point and eventually bought his own boat and went cod fishing in the summer and lobster fishing in the winter. He retired from fishing at the age of 67 and settled into home life at West Head, Cape Sable Island.

Drake was recently presented with the 2016 national Prix d’Excellence in the category of National Individual Commitment for her work with the Harbour Authority of Burin. The Prix d’Excellence is one of Fisheries and Oceans Canada’s most prestigious awards, honouring teams and individuals who have made exemplary contributions to the success of the Department’s Harbour Authority Program. This award acknowledges individuals who have shown extraordinary dedication to the ongoing success of their harbours or who have significantly contributed to the Harbour Authority Program over the years. Drake has been the harbour supervisor and bookkeeper for the harbour of Burin since 2003. For the last seven years, she has played a key role in the development of a mentoring program to provide hands-on financial training to Harbour Authority members across Newfoundland and Labrador. She continues to demonstrate valuable leadership in her participation in and contribution to the strong network of Harbour Authorities within Newfoundland and Labrador.

Is Lobster Larvae Decline a Factor in Whale Deaths?