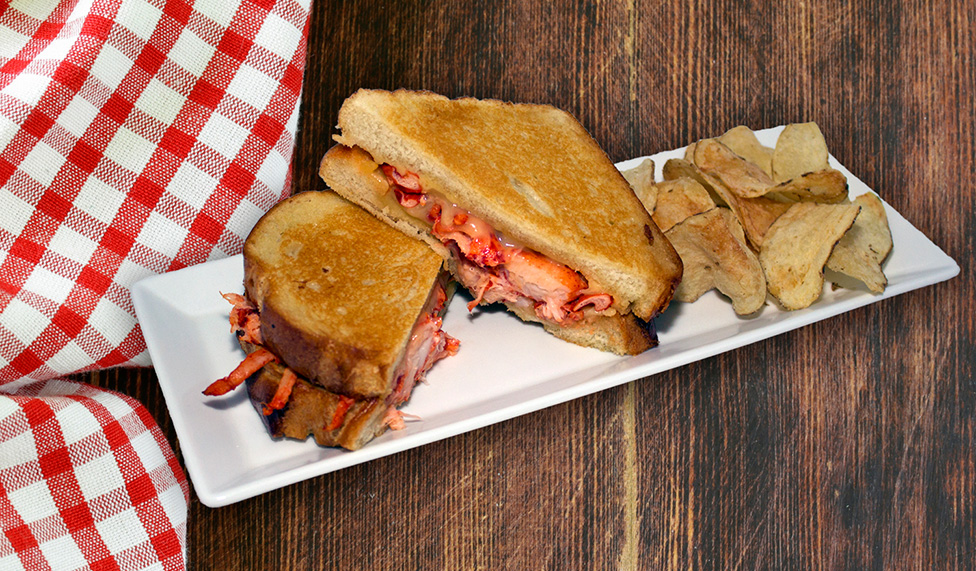 The Ultimate Lobster Feed: Summerside, P.E.I. Cooks up A Celebration of its Favourite Crustacean

With a happy Latin beat as background noise, chef Norman Zeledon plopped two halves of a lobster tail into an enticing looking concoction simmering on his food-truck’s stove.

The liquid, explained Zeledon, was mixture of butter, lobster juices and other tasty sounding things.

Leaving the lobster to absorb the butter he pulled a puck-sized lobster cake out of the deep fryer, placing it on a bed of colourful salad and garnishing the sides with his specialty coleslaw and a slice of locally reared pork. 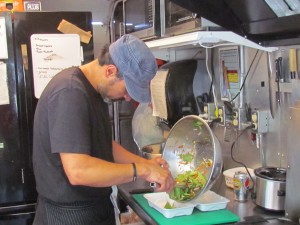 Chef Norman Zeledon, of The Galley prepares his lobster potato cake on a bed of salad and coleslaw.

Removing the meat from the stove, he spread a creamy white sauce over top of the cake and placed the lobster on top.

He served it up to his customer with a smile.

The dish is a specialty to his kitchen, though it’s not alone in the small Prince Edward Island city of Summerside.

The entire month of July marked the Go Lobster campaign — part of the Summerside Lobster Festival, which took place from July 20 to the 25.

Diners were asked to get a stamp in a little passport from each restaurant they ate at and could enter their totals online at www.golobster.ca for a chance to win prizes.

Zeledon’s food truck, The Galley, is only in its first year of operation on the Summerside waterfront, but he didn’t hesitate when approached to participate in the Go Lobster campaign. 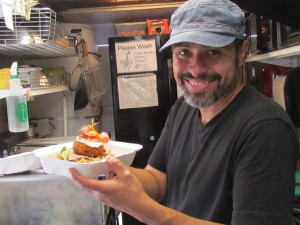 Zeledon shows off the lobster potato cake, part of the Go Lobster campaign in Summerside, P.E.I.

“I thought it was such a unique idea,” said Zeledon.

“To have all these restaurants come up with unique dishes, to promote lobster not only for the restaurant industry, but also to try and promote it for the fishermen. Hopefully to try and bring up their prices a little bit.”

At the time of this interview, it was only the second day of the campaign so the jury was still out on its success for Zeledon, but he’d heard positive feedback from other restaurateurs from last year’s inaugural campaign so his hopes were high.

“I can’t wait for the final numbers, to see how much we all sold and how effective it was. I think if we keep it as an early thing that we do, it will be great to see how much lobster is consumed for the Island,” he said.

Last year’s campaign sold about 5,000 dishes from the 18 participating restaurants. Each dish was required to be under $20 and most were in the $15 range.

That’s a lot of lobster eaten and money spent at local eateries.

It was more than Don Quarles, executive director of the festival could have hoped for.

“I was blown away,” said Quarles. 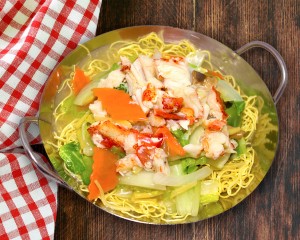 The Lobster Lo Mein from the King Wok Restaurant.

“There’s no question, we had many people tell us that they wouldn’t have gone to those restaurants if they hadn’t had a passport in hand and followed the scavenger hunt of ‘where do I find lobster?’ We were pretty delighted.”

Quarles is a relatively new addition to the Summerside community.

He was hired to take over the organization of the Summerside Lobster Carnival in 2014, when the venerable old shindig had largely become a shadow of its former self.

In years past, the week-long carnival had been the premier event of the summer for many Islanders; it was a time of rides, food, games, music and harness racing. It was outdone perhaps by only the larger Old Home Week in Charlottetown.

But those days were in the past.

By 2013, the carnival’s midway had shrunk to a mere handful of rides and games, the sizable crowds of yesteryear were gone and organizers seemed at a loss as to how to reverse the carnival’s fortunes. The event had even largely forsaken its namesake, with only a couple of events with actual lobster in them.

There were new events introduced every year to try and entice people back, but they rarely caught on with visitors and the overall attendance continued to slide. 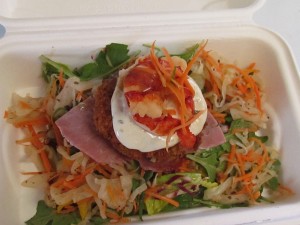 For decades, the carnival had been run by a conglomerate of local clubs who split the profits to support their philanthropic ventures, but by 2013 the local Rotary Club was the last one still invested and even it was looking for a way out.

It was finally decided that the City of Summerside would take over the organization of the carnival, which is when Quarles was hired.

The Montreal native has an extensive background in event promotion and organization and he used that experience to convince people it was time to shake up the carnival for its own good.

The re-launched festival went back to its roots in 2014, focusing on music, community social events and especially lobster and the Go Lobster campaign was the centrepiece of that effort.

Similar culinary campaigns on the Island have proven big successes, such as the province-wide Burger Love competition, which focuses on Island beef and Porktoberfest, which focuses on pulled pork sandwiches made with local meat.

Lee Guathier, general manager of Revolution Media, took the lead on developing the campaign for the festival and came up with the passport initiative for the Go Lobster campaign after consulting with local restaurateurs.

They wanted their campaign to be less about picking a winning chef or kitchen and more about celebrating the diversity of the offerings available, said Guathier, and he feels the passport initiative does that. 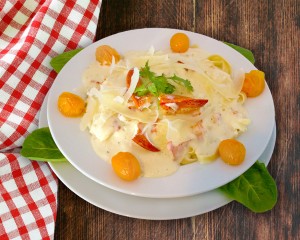 Last year’s campaign produced some encouraging results, said Guathier, so there’s no reason to think this year won’t do the same.

“Our tourism department on P.E.I. has certainly been highlighting culinary (experiences) for a number of years now. Lobster is the largest export in the seafood industry that we have. And we felt, what a perfect tie,” said he said.

“It’s been a great rallying point for all the Summerside restaurants to showcase the high quality food they are serving,” he added.

As for the future of the campaign, Gauthier and Quarles would like to see it continue to expand.

They’ve also had request from outside the city to expand the campaign, but they’ve resisted that idea so far, wanting to keep it a uniquely Summerside experience.

Anyone who’d like to know more about the campaign or see all the different dishes on offer can see them online at www.golobster.ca.

Innovation is Crucial for Any Industry, Including Aquaculture

No Replies to "The Ultimate Lobster Feed: Summerside, P.E.I. Cooks up A Celebration of its Favourite Crustacean"