On July 13, 2020, my neighbour and l went fishing for cod in the recreational food fishery.

We didn’t go fishing very early in my opinion, it was 6:30 a.m. As we cleared the last point and the open ocean came into view, it was like a television show I watched years ago where an Indigenous person named Moses would look over an empty place and call it the big empty. That’s what it looked like this morning.

Imagine a fishing town like Twillingate in the heart of fishing time and only one boat on the water that hour of the day.

We have an empty fish plant and a cod/groundfish moratorium for 28 years. Imagine, when I took my cod traps out of the water in July 1992, a boy was born in Twillingate, now he is married and has children and the Department of Fisheries and Oceans (DFO) tells us we are in a worse state with the cod biomass than in 1992. I don’t believe it. We are still in this mess, no rebuilding plan — someone is not doing their job. 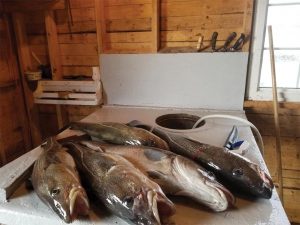 In 1992, the link was broken in the chain and it has been kept broken to get rid of the inshore fishery. If there are no new entries, the fishery will die and it is dying and we all know it. Yet, what is done about it?

In my opinion, it is criminal what the governments, both provincial and federal, the FFAW and parasite groups have done to us fishing people. Look at the money in fishing income our province, our town and fish harvesters have lost.

Where are our town councils, our Newfoundland and Labrador MHAs, MPs and our fish harvesters that should be fighting to save our culture and our fishing villages? Oh, I forgot, we are known as the friendly people and we sure got taken advantage of.

There are more guts in a turnip than there are in us and if we don’t wake up soon our inshore fishery will be gone the way of the dodo bird.

DFO opens a recreational cod food fishery while our commercial stewardship fishery is sitting on the back burner — unreal.

Right now, our food fishery seems to be working, people are not restricted very much and can get all the codfish for food they want. But when something gets really restricted, everyone wants part of it. It won’t be long, again in my opinion, that if people are not vigilant, their cultural right to catching a fish for the table will be over-regulated with hundreds of regulations like the commercial fishery.

Parasite groups in this province are already planning ways to have a licence and tags for this fishery to benefit them.

On the Waterfront - September 2020