Kenneth Hickey was known as a cautious fisherman.

His wife Madeline says her husband often worried about many of his peers because he felt they were not exercising safe fishing practices. She says he often voiced his thoughts on the matter and that is why she never worried about Kenneth when he was at sea.

Kenneth, from Southern Harbour, Newfoundland, was generally attentive and careful in almost everything he did, but in a period of a year or so he had a couple of close calls that probably could have been avoided with a little extra care and caution. However, as the saying goes, “accidents happen.”

On the first occasion, Kenneth went moose hunting by himself not far from Southern Harbour late in the fall of 2013. He parked his truck on the shoulder of the Trans Canada Highway and walked about a mile into the woods.

Perhaps thinking he might see a moose at any moment, Kenneth had his rifle loaded while he walked. Something happened causing the gun to discharge and the bullet blew off the top of his little (pinky) finger on his left hand. Kenneth lost half of his finger in that incident, but he was very aware it could have been much worse.

Approximately a year later, in the fall of 2014, Kenneth traveled to St. John’s to pick up some supplies for his fishing vessels, as well as a number of personal-use household items, including three tanks of propane fuel.

Driving home that afternoon, it appears Kenneth fell asleep at the wheel while traveling west on the Trans Canada Highway about 30 miles west of St. John’s. When the van left the road, it smashed head-on into a rock cliff. Obviously, the van came to a very sudden stop and the three propane tanks in the back of his van went hurtling through the air toward the front. One of the tanks struck Kenneth’s head, causing a large cut that bled profusely.

The first vehicle to arrive at the scene of the accident was a van operated by a taxi service that made regular runs between St. John’s and St. Lawrence on the Burin Peninsula. One of the passengers in the taxi was Brian Drake, a paramedic from St. Lawrence who was experienced in providing life saving skills.

Brian rushed to Kenneth’s van that had been transformed into a mass of twisted metal. He realized that Kenneth was trapped in the wreck and unable to be removed until firemen arrived with the appropriate equipment.

As he worked to try and comfort Kenneth, Brian recognized him from the year when Kenneth landed fish to the St. Lawrence fish plant.

With Kenneth unable to move, Brian was restricted in what he could do to help save the Placentia Bay fisherman, but he climbed inside the wreckage anyway and held his head and applied pressure near the wound in such a way that the blood flow slowed enough to keep him from bleeding to death.

The paramedic stayed with Kenneth for more than two hours until firemen managed to get him out of the van by using the “jaws-of-life.”  Kenneth was then taken to hospital in St. John’s by ambulance.

“I’m sure that the paramedic saved Kenneth’s life,” Madeline says, adding that because Brian did such a good job, her husband was in hospital for just eight hours — a couple of hours to have the cut on his head stitched and then a few hours for observation. He was released the same evening.

Madeline says his close calls on those two occasions, within a year, made Kenneth appreciate life more than ever and to be more vigilant in taking all the safety precautions necessary to avoid accidents. 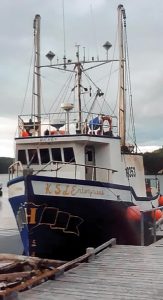 However, like her husband, Madeline was also aware that fishermen are often caught in a variety of circumstances beyond their control that sometimes prove fatal. A sudden storm causing high winds and rough seas is among the top causes of capsizing causing loss of life.

Fire at sea is almost every captain’s worst nightmare because there is nowhere to run and everyone who has personal knowledge of marine safety concerns knows that a sudden ingress of water can happen at any time and are caused by a large variety of reasons.

Less obvious and not as tangible as most reasons for accidents at sea are government management regulations that sometimes force fishing people into a dangerous corner. The Hickey family of Southern Harbour, Newfoundland knows all about that.

Madeline fished with her husband for years until she was injured. She still suffers back pain as a result of the injury and remains medicated to reduce her pain and discomfort. Her condition has prevented her from going to sea since the accident.

Other than the hunting and vehicle accidents, life in general was relatively normal for Kenneth Hickey in 2015.

He was aggravated by delays in an upgrading project on his vessel KSL Enterprises. He had hoped to have the work completed in time to catch his crab quota that spring, but several unexpected issues led to problems that pushed the completion schedule beyond the closing date of the crab season.

Snow crab was the main cash crop of the Hickey fishing enterprise in 2015 and Kenneth had to find a way to land his crab allocation, as well as looking after Madeline’s remaining quota onboard their other vessel, the Samantha D Patrick. There were several alternatives, including leasing another vessel, but that was costly and therefore unfeasible.

In January 2015, Kenneth acquired a 23-foot fibreglass speedboat and registered it as a secondary vessel to his core enterprise. 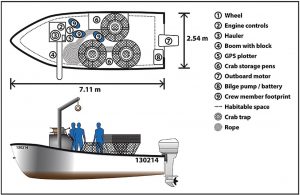 Sketch of Kenneth Hickey’s speedboat outlining the modifications he had done to prepare the boat for crab fishing.
Photo courtesy of the Transportation Safety Board

A 23-foot open speedboat is a poor substitute for a 45-foot longliner for fishing snow crab, especially in foul weather, but it would be an option if no other alternative could be found.

In late May, time was running out and Kenneth decided that using the speedboat was the only viable alternative.

He talked to his two crewmen, Larry Loveman from Leading Tickles on Newfoundland’s northeast coast and Dave Warren from Arnold’s Cove near Southern Harbour. He explained to the crew that he needed to modify the speedboat in order to land crab.

So, near the end of May, the three men started working hastily to get the speedboat ready. According to a Transportation Safety Board (TSB) report, Kenneth, Larry and Dave fitted plywood crab/ice storage pens, near midships on either side of the vessel. A small console with steering/engine controls and a gasoline-operated hydraulic hauler was fitted in the forward part of the vessel, including an aluminum crab boom on the port side.

The main trawl line with the crab traps attached would pass over the block hanging from the boom and then around the vertical hauler/gurdy mounted on the forward part of the console when hauling the strings of crab traps.

It wasn’t what Kenneth wanted, but by June 11, the speedboat was fitted out and ready for work. Unfortunately, things didn’t go as planned for the three fishermen.

Join us next month for Part II of Third Time Unlucky.

No Replies to "Third Time Unlucky"