Those Criticizing Arctic Clam Award are Ignoring History of the Fishery

I feel compelled to write to you to provide some clarification on a number of items related to the Arctic surf clam fishery that I feel are not being presented in recent news articles.

These show, in my opinion, that the Minister of Fisheries, Dominic LeBlanc, made an informed and correct decision and that some of the claims being made about the negative impacts of this decision are being overstated in an effort to undermine the minister’s decision.

What is not being reported is the fact that this Arctic surf clam fishery was never intended to be a monopoly and originally consisted of four licences each with equal share of any total allowable catch (TAC).

At the beginning of 1991, four companies based in Newfoundland and Nova Scotia equally shared this resource; however, by the end of the year, Clearwater had purchased one of the other licences and another company, the NS Clam Co., stopped operations due to financial problems.

In 1992, the NS Clam Co. went out of business. Interestingly, this fourth licence simply went out of existence and it was decided that the TAC would simply be divided by the remaining three rather than four.

Recently, it has been widely reported about the harm caused by adding this new licence because Clearwater has invested in harvesting (new vessels) and processing (plants/production). The mayor of Grand Bank and others in Newfoundland and Labrador have warned of the major financial impact this will have on the industry, in particular to the town of Grand Bank.

It is important to realize that actually utilizing the full Arctic surf clam resource is a new phenomenon. It wasn’t until 2016 that the entire TAC was caught by Clearwater.

Prior to 2016, the company utilized only an average of about 53 per cent of the available TAC over the last 10 years leaving nearly 200,000 tonnes of Arctic surf clams on the ocean floor over this period.

Regarding the town of Grand Bank’s reliance on the surf clam fishery, this, too, is a relatively new issue. This is due to several things — the first, as described above, is the fact that the entire TAC has only been caught beginning in 2016. The inflated employment numbers being portrayed are only true since 2016.

The second is the fact that the bulk of processing occurs onboard the vessels themselves with the operation in Grand Bank serving as a grading, packing and value-added production, which is all very valuable and important for that community. I don’t want to downplay that — but imagine what employment could be achieved with land-based processing.

And, finally, the production in Grand Bank has only relied on the entirety of the Arctic surf clam TAC since 2005 when production in North Sydney, Nova Scotia, was shut down, employees laid off and production moved to Grand Bank.

Another key piece of information that is never reported about the Arctic surf clam fishery is the fact that, up until Minister LeBlanc’s recent decision, the sole operator in the fishery, Clearwater, had exclusive access to not just Arctic surf clams, but also many other bivalve molluscs that occur across the Scotian Shelf (all of NAFO zone 4VsW) and the Grand Banks of Newfoundland.

It is unfathomable that this massive piece of real estate was set aside for one company operating three vessels for so long. Within this area species such as ocean quahog, Atlantic surf clam, northern propeller clam and Greenland cockle clam are known to exist in massive quantities.

The potential of these resources is tremendous. For example, a DFO-lead survey on Sable Bank (in NAFO 4W) in 2003 determined that the ocean quahog resource could support an annual TAC of 13,602 tonnes; yet this resource has never been developed because Clearwater was the only company allowed to harvest it and it was busy focusing on the Arctic surf clam resource.

Further on the Grand Banks, only a small fraction of the Bank (less than one per cent) is actually harvested by the company, despite the fact that a multi-year survey showed that the resource of 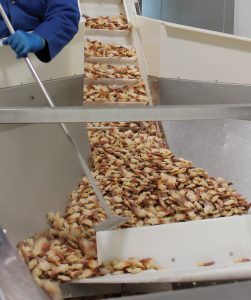 other species is incredibly abundant across most of the Grand Banks.

And while development of a new fishery for other species is not without its challenges, actually having someone other than Clearwater take that chance and access that resource is something that hasn’t been an option until Minister LeBlanc’s recent decision.

The reason for speaking out on all of these issues is not to point out flaws with the way Clearwater has undertaken this fishery. On the contrary, the company has pioneered the fishery and achieved some incredible things.

The reason for saying all of this is because it is time to give others a chance at this vast resource and to provide a different perspective that contrasts with the common sentiments in the media recently. I firmly believe that any negative impact to Clearwater will be short-term and minimal.

I have invested nearly $3 million since 2007 to try to gain access to the Arctic surf clam because I felt like it was a significant fishery resource belonging to the people of Canada that truly wasn’t benefitting the Canadians that lived closest to it.

Like snow crab or shrimp, the sheer magnitude of the resource can bring real wealth to our coastal communities providing many good-paying jobs and supporting livelihoods in our economically depressed region.

As well, I am pleased that our First Nations communities will also benefit from this fishery and applaud Minister LeBlanc in his stance to ensure this is the case.

I feel it is important to understand all of the facts and the history of this fishery before jumping to conclusions about the minister’s decision to allow a new entrant into this fishery.