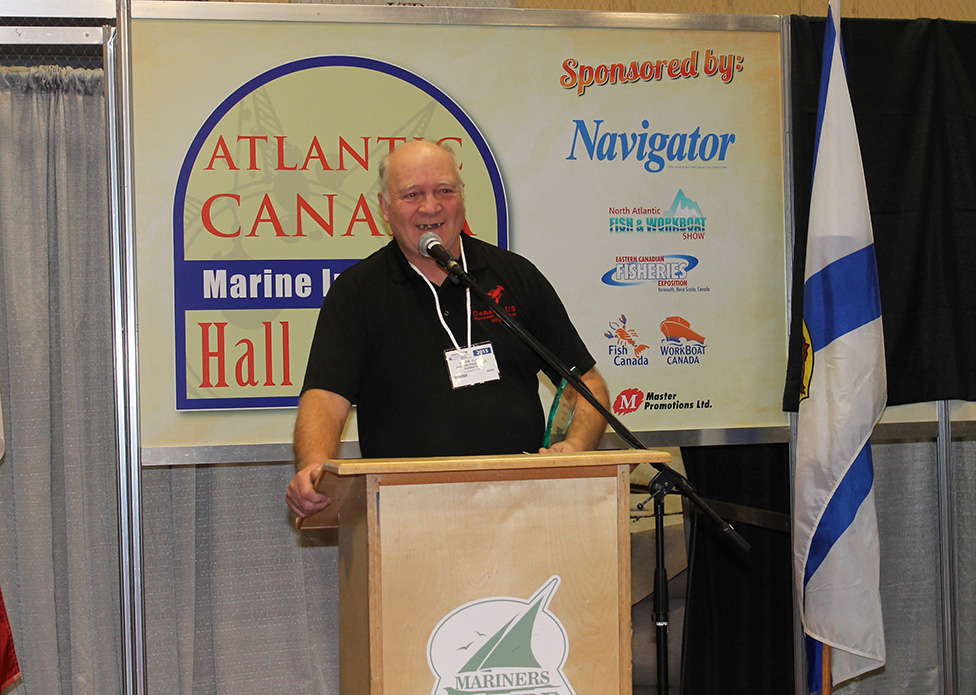 Eugene O’Leary didn’t want to be a fisherman.

His father fished out of Upper Whitehead, Nova Scotia all his life and although as a boy, Eugene would join his dad in the boat from time to time, he almost always got seasick.

Eugene says his father offered the most bizarre ideas to cure seasickness — remedies like eating raw cod livers. The only upside to that was the fact you weren’t sure what was making you lose your breakfast; the remedy or the seasickness.

If that wasn’t enough discouragement, Eugene’s dad didn’t want his son to follow in his footsteps anyway. The elder O’Leary said that it was impossible to make a living in the business and a smart young man like Eugene would be better off doing something else.

“’You’re too smart to be a fisherman,’ he told me but I proved him wrong, twice in fact,” Eugene laughs. “I showed him I wasn’t all that that smart and went fishing — and his remedies for seasickness didn’t work either.”

But it took a while before Eugene proved his dad wrong.

For more than 20 years Eugene worked as an electrician and carpenter in various provinces. He didn’t fish commercially until 1990 when he was 40. And, ironically he got into the business by taking over his father’s enterprise when his dad retired. 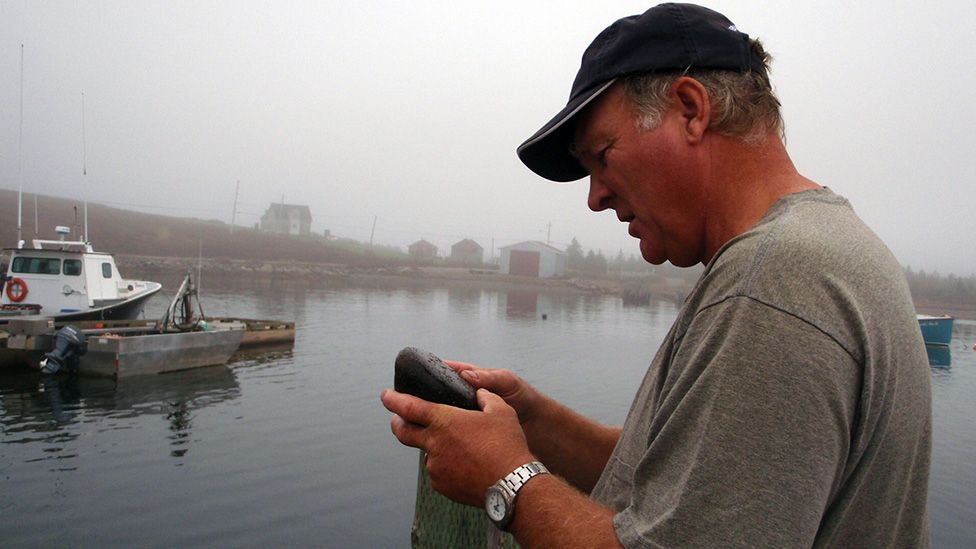 Eugene in Whitehead, Nova Scotia getting ready to set collectors.

Eugene started fishing when the industry was at its lowest point in recent memory in the Upper Whitehead and Canso area of Nova Scotia. Cod stocks were in serious decline and were placed under moratorium a couple of years later. Lobster landings were also low.

In fact, after the cod moratorium, things got a little dicey for small-boat fishermen like Eugene. He says they even had to quit fishing for mackerel, not because there were none, but it was pointless to set a net because the rapidly increasing grey seal herds would eat their catch. And, he says, what the seals didn’t ruin, government regulations did. They brought in all kinds of new policies like dockside monitoring and it became financially unfeasible to even bother fishing species like herring.

So basically, it came down to lobster alone and, in the 1990s, lobster fishing in his region was no great shakes.

Lobster fishing in eastern Nova Scotia is very different from the much larger lobster fishery in southwest Nova where boats are large, travel long distances and have crews of five or six people and fish in winter.

Eugene O’Leary and his colleagues fish in late spring and summer in very shallow water from speedboats or small inboards. Eugene says they have to fish so close to shore in spring that every now and then, their boats will strike a rock or two but he jokes that the rocks don’t seem to mind — they don’t bother moving and they don’t complain.

“My worst year was 1996; we landed just 2,700 pounds,” Eugene says, adding that for a lot of fishermen it was nothing more than what was known as a stamp fishery — just barely making enough money to qualify for Unemployment Insurance to get through the rest of the year. Eugene was fortunate that in the off-seasons, he found work as an electrician or carpenter to supplement his income if needed.

But Eugene stuck with it and finally, in 2003, 13 years after his foray into the industry, lobster catches started a dramatic swing upwards.

Eugene says there is no solid explanation for the sudden increase in the lobster population. They just suddenly appeared and hopefully will continue to thrive.

Eugene says the timing for the upswing in lobster landings couldn’t have been better. The major fish plant in the area closed, throwing a lot of people out of work, but lobster fishermen were busier than ever and needed help so many of the displaced plant workers went fishing.

Meanwhile, Eugene is hoping that a sustained lobster resource is not left to chance. He is one of several fishermen who work with scientists to learn about lobster behaviour and how to detect when the species might need a helping hand through conservationist management to prevent a population decline. 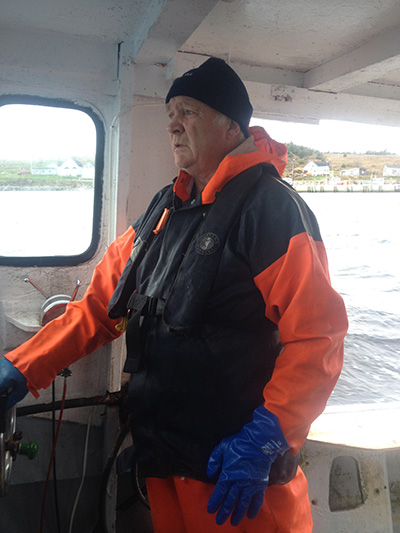 He is also very involved with various groups and agencies to find better ways to market lobster that would ultimately translate into higher prices.

Eugene got involved with various volunteer groups starting in the late 1990s when DFO brought in new conservation measures.

“It was things like increasing carapace size, shorter seasons and v-notching, but we wanted to know how they [DFO] would know the effect of those measures and they said they had no plan for monitoring and we thought that was stupid so we came up with some ideas for them.”

After numerous meetings with government bureaucrats, DFO assigned a biologist to work with fishermen and they developed several schemes, including tagging lobsters to monitor migration and other behaviour, to determine the results of the new conservation measures.

Eugene has been on the executive of the regional fisherman’s association for most of his 25 years in the business — he is president today. As part of that organization, he’s fought for fishermen’s rights and protection through federal policies such as fleet separation and owner-operator guidelines. He’s also fought against the concept of trust agreements, now referred to as ‘financial arrangements,’ to make it sound more palatable according to Eugene, who quickly adds, “a donkey is still a donkey.”

As an executive member of the Lobster Council of Canada, he works with a large group to help gain greater access to more markets.

“We’re not trying to sell flavour; everyone has their own tastes so it has to be about educating people to facts that will make them want our product — for example, we can send live lobster to anywhere in the world, China, India, you name it. The emphasis should be on live and people will soon realize that they can’t get better quality than this healthy, high protein food when it’s something they can buy while it’s still alive.”

Eugene also sits on a committee that keeps up to date with what goes on inside the world of offshore oil and gas development.

He says he heeded the advice from a Scottish fisherman he met several years ago who said that fishermen should demand to be on every committee of every industry that could have significant impact on the fishery no matter if the impact is negative or positive. The Scottish fellow said if you have inside information you can work to protect the best interests of fishermen, but if you don’t know what’s going on, there’s nothing you can do until it’s too late.

Eugene thought his new Scottish friend was a wise man and combined with his apparent inability to say ‘no’ to anyone who asks him to sit on a board or committee, he finds himself as busy as a beaver. But then, he acknowledges that his fishing season is short and he does have time to work at trying to improve conditions for fishermen everywhere.

“It hurts to see so many of our young people leaving our small communities and it would be good if we could keep our fishery healthy enough to keep them home,” he says.

In fact, they seem to be doing something right in Upper Whitehead. Eugene says they have nine out of 14 captains in their fleet under age 55 and four of those are younger than 35. Proportionately, that’s better than most fleets in Atlantic Canada where most captains are near retirement age. Eugene also echoes a common thought about the younger men who do stay. He says they are fishermen because they really want to be and prefer the lifestyle. And, that makes them great fishermen — not just mediocre.

Eugene himself is at the age when most people consider retirement. He received his first old-age-security cheque a few months ago, but he has no plans to retire yet because unlike the tough times when he started fishing, life is much better today. He summed it up well with his last comment.

The Ultimate Lobster Feed: Summerside, P.E.I. Cooks up A Celebration of its Favourite Crustacean

No Replies to "Too Smart to Be a Fisherman"