Chart your course for a career with the Canadian Coast Guard.

Like any destination in life, there is more than one way to get there. This is what CCGS Teleost senior engineer Shona Dalton and Canadian Coast Guard College student Peter Mitchell have discovered.

Dalton, now 39 years old, grew up in Conception Harbour, Newfoundland and Labrador and the ocean wasn’t necessarily calling to her.

“I guess like most Newfoundlanders, it’s just there. Nothing really stands out but I can remember being by the ocean early in the mornings when I was a kid and it had a certain smell.” 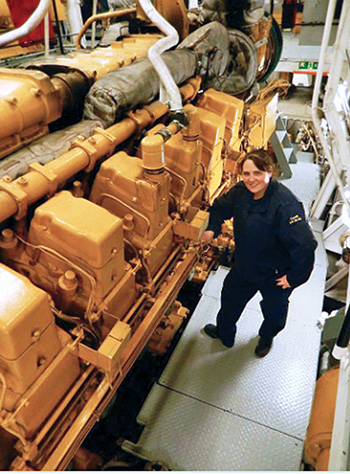 Shona Dalton started working with the Canadian Coast Guard as an oiler and worked her way up to the rank of senior engineer.

What did stand out for Dalton as she finished high school was the demand for people to go work on the sea. “I did a little bit of research, and then I did marine engineering at the Marine Institute at Memorial University. I did my work terms with the Coast Guard.”

When Dalton graduated, the Canadian Coast Guard hired her as an oiler, then she worked her way up. She explains, “the third engineer, which is the next level after oiler, then second engineer and then senior engineer which is currently what I am.”

Dalton is currently posted to the CCGS Teleost, but she laughs as she recalls her first work term. “I had no idea what I was getting myself into. I remember the first thing that I thought was ‘what the heck am I doing?’ ”

But after a few weeks it was like any workplace. “Once you get in there, you settle into a routine.”

Over the next few years, where will Dalton’s path lead? Since starting at the bottom, Dalton has one more level to go before becoming a chief engineer. “I’ve pretty well gone through all of the steps in the engine room of the ship, I’ve done all the positions.

“It’s hard to look forward when you’re content with what you are doing at the moment. But I want to get that chief engineer’s ticket. As of right now, I just cannot see leaving the Coast Guard — you know, not being on a ship.”

If you search the name Peter Mitchell you’ll get two results.

One is steeped in history and a Father of Confederation who was born in New Brunswick in 1848. In 1867, Peter Mitchell was appointed to the Canadian Senate and became the first minister of marine and fisheries.

The other Peter Mitchell is 30 years old and he grew up in Nelson, British Columbia. While no relation to former Fisheries Minister Mitchell, the young Mitchell knew after a high school field trip to a marine research station that his career path would lead him to work on the water.

“I feel a strong connection to the ocean and water. I’ve grown up being around water my entire life. My summers were spent swimming, river canoeing, sea kayaking, and scuba diving,” he says.

His first degree was in marine life and ecosystems and he has worked as a fisheries observer on ground trawlers and a fisheries biologist studying salmon migration.

“I was looking for a change in my career and after looking at a couple different options, I eventually applied to the navigation program.”

The Canadian Coast Guard College opened in 1965 and there have been over 1,200 graduates from the Officer Training Program since that time. On June 4, 2016, Peter Mitchell’s name will be added to that list of graduates. 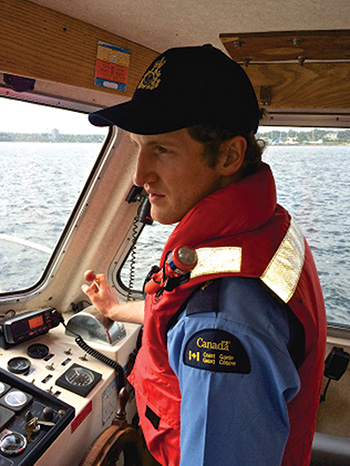 Peter Mitchell is a cadet at the Canadian Coast Guard College in Sydney, NS. Upon graduation, he will join a CCG vessel as a navigation officer.

If you are drawn to a life of public service and want to work on the water, the Canadian Coast Guard College may be the place for you.

There are many benefits to attending the College, such as tuition, textbooks and training costs being covered, but perhaps the best thing is that you are guaranteed an opportunity after you graduate to serve your country through working in the Coast Guard fleet. And once you’re on board, opportunities abound to see parts of this country that you might never get to see otherwise.

The program was a bit daunting when Mitchell first started, “but then you put your head down and before you know it, it’s almost over.” That sounds a lot like Shona Dalton’s experience during her Canadian Coast Guard workterm.

While their destination is the same, Shona Dalton and Peter Mitchell each charted a different course to work for the Canadian Coast Guard.

“The job is adventurous and the ocean is a beautiful place to work,” says Mitchell, “and my office window has the best views.”

“I like going to sea because of the experiences,” says Dalton, “it’s a fluid environment, literally, pardon the pun. Even now, early in the mornings, when I stand on the deck I get that same smell of the ocean and it reminds me of being kid.”

Some might say there’s no life like it. Chart your course. Pick your path and steer towards the Canadian Coast Guard.

Explore your options on the College and Careers section on the Canadian Coast Guard’s website: www.ccg-gcc.gc.ca/College-and-Careers/home

No Replies to "Two Paths to the Canadian Coast Guard"