Under the Surface: Ocean Noise and its Effect on Marine Life

Dr. Jack Lawson was about 10 years old when he watched Jacques Cousteau television documentaries and decided he wanted to work with marine mammals.

“Ever since I was a kid, I used to watch Jacques Cousteau on TV. He would often show something on some diving adventure, and I developed an interest in whales from that.”

While Lawson was finishing his undergraduate degree in Alberta, the head of the department, who knew Jack was going to Arizona to undertake a Ph.D. studying scorpions, heard of a graduate position available at Memorial University to study marine mammals and convinced the young scholar to apply. There was no turning back for Lawson and he ended up studying marine mammals by doing a master’s degree and a Ph.D. on seals at Memorial.

Since the mid-1990s, Lawson has been with Fisheries and Oceans Canada (DFO), starting as a postdoctoral student, before taking a research scientist position in the Marine Mammal section with responsibility for marine mammals listed under the Species at Risk Act (SARA) in 2002. 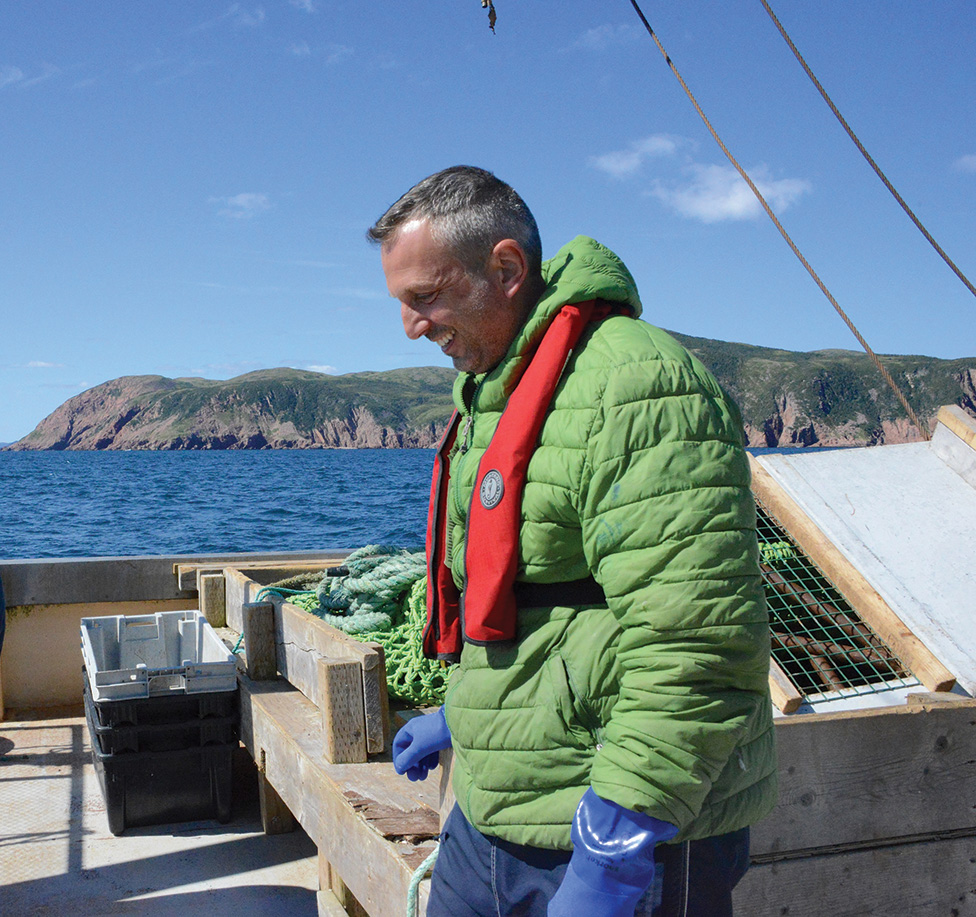 Winston Pitcher Aboard the Burin Tradition.

He was hired primarily to study marine mammals that were SARA listed: blue whales, North Atlantic right whales and at the time, harbour porpoises. He was also given the file for leatherback sea turtles. Lawson describes himself as a “finder and counter of marine mammals.”

His continuing role is to learn the abundance and distribution of these animals, figure out to what stressors they are exposed, such as bycatch, vessel strikes or ship noise and determine if there are things that can be done to mitigate these stressors.

Now, Lawson’s expertise is being put to use as part of the Marine Environmental Quality (MEQ) program to better understand the effects of underwater noise, as an environmental stressor, on marine mammals.

For Lawson, this means ongoing marine mammal monitoring in Placentia Bay is getting a big boost. He and his team have been working in the area since 2005 when they learned that Placentia Bay and Burin are hotspots for marine turtles and whales. They have already gathered some baseline data, but with support from the Oceans Protection Plan, they’re in the process of collecting a lot more.

In cooperation with a graduate student from Memorial University, Lawson and his team are developing a soundscape — a detailed three-dimensional picture of underwater sound — in the bay.

Data is collected with underwater recorders, which can detect low frequency sounds from large whales, high frequency sounds from smaller porpoises and natural and human-made sounds. The recorders have been placed near the seafloor at different points in the bay. They look like a three-foot version of a yellow submarine and have an underwater microphone to record sounds 24/7, year-round. 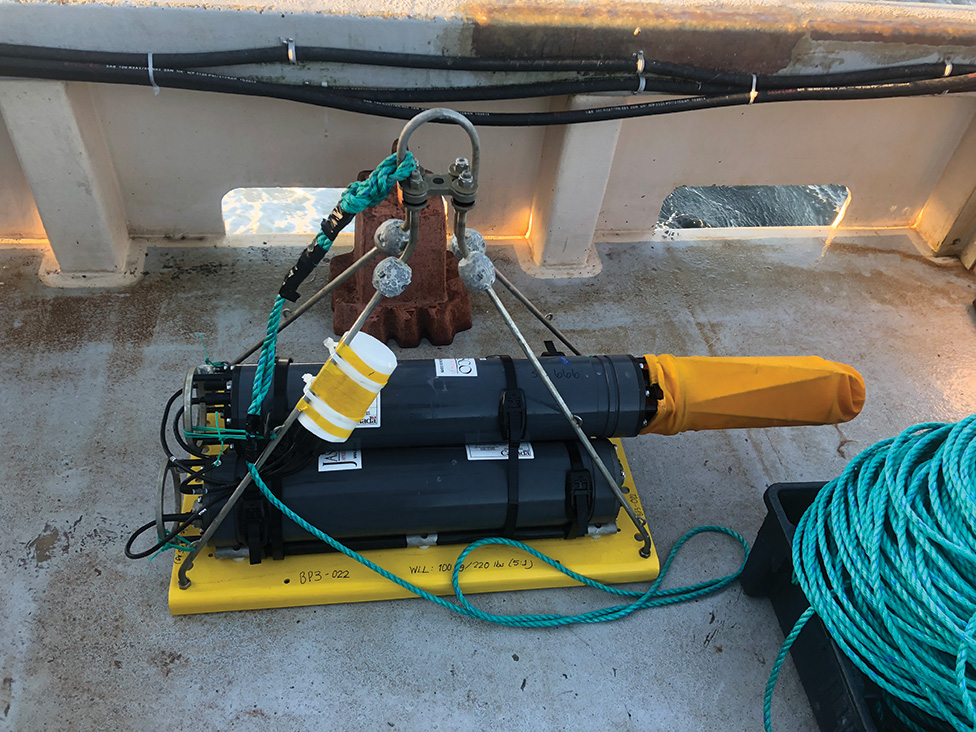 As people in the area know, Placentia Bay is one of the busiest ports in Canada and according to Lawson, is very noisy.

“It’s very different than it was 500 years ago when people weren’t here. Today, you can hear vessel noise, including fishing boats and oil tankers, or big ships in the summertime like the ferry that sails between Argentia and North Sydney.

When played back on special equipment, every noise looks different on the soundscape, but Lawson gets very excited when they detect an animal noise.

It’s estimated there are more than 8,000 humpback whales off Newfoundland and Labrador’s coast and less than a few hundred blue whales in the northwest Atlantic.

When asked what whales sound like, Lawson says North Atlantic right whales can sound like gunshots or make a ‘whoooup’ call; fin whales call at very low frequencies (20 hertz, which is below what people can hear unless we speed up the recording); the world’s largest mammal, the blue whale, has an arch-shaped call when viewed on a computer and sperm whales make series of clicks, known as codas.

All of these sounds look different when displayed on a computer and it is these differences that allow Lawson and his team to identify what whales are present.

Many of these unique sounds are used for social interaction or finding food, such as through echolocation. Animals use sound to locate and identify objects. They will make high frequency clicks and listen for the echoes that return from various nearby objects.

“The neat thing about big whales like fins and blues is that their calls can travel for hundreds or thousands of kilometres. The calls are very loud and, being low frequency, they can travel a long way. But other low frequency noises, like shipping or oil and gas seismic exploration, may affect the range of those calls. Can the whales still find food? Are they stressed? Are they displaced from areas where they like to be because it’s just too noisy?”

Lawson refers to the Government of Canada’s mandate to protect habitat that is important to species at risk. DFO recognizes that sound quality is an important habitat feature and protecting habitat that support both animals and industry is extremely important to scientists like Lawson.

Lawson and his team do large-scale aerial surveys around Labrador and Newfoundland, searching for North Atlantic right whales and other marine species. Part of those flights includes searching for mammals in Placentia Bay.

Tagging whales and tracking them using satellites to see where they go is a part of the team’s research as well. They tagged four humpback whales and two fin whales last summer and are hoping to tag another 15 whales this summer. 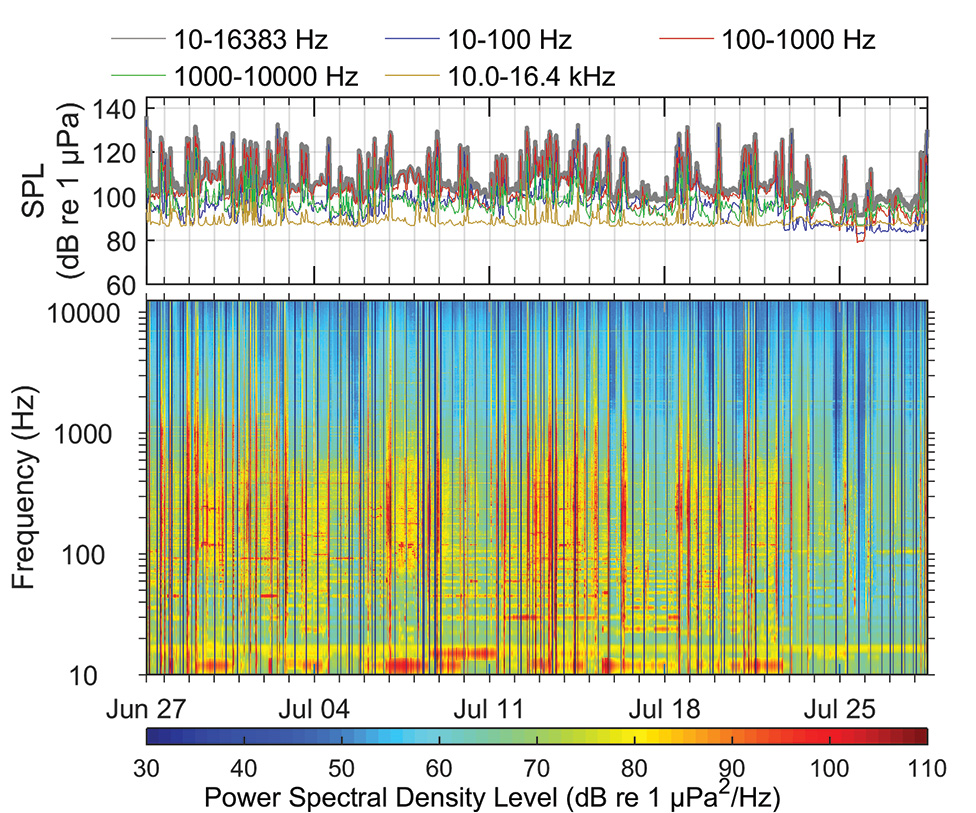 Image of Underwater Sounds Recorded at Arnold’s Cove by AURAL

One of Lawson’s favourite tagging stories is about a humpback whale they tagged on July 17, near St. John’s, last year. Like many others, it stayed around the Avalon for a long time.

“By the end of December, all the tags had stopped transmitting, as the batteries do wear out. We were very happy. ‘Cool. We got some data.’” They assumed all the tag batteries were dead.

“And then in February, in the tropics, one of our tags started to transmit again. It was a humpback whale in the Dominican Republic. It stayed down there for a month and a half in 24-degree waters before heading back north up the mid-Atlantic ridge. The last report we had before the tag finally died was on April 30 in the very middle of the Atlantic, about as far away from anywhere as it could get,” he laughs. They still don’t know why it stopped transmitting for a such a long time. Lawson still logs into his computer every day to check. One thing they’ve learned from the tagging programme is that these animals are not as predictable as they thought.

Another data set for the programme will come from visual surveys. Lawson’s team go out for four to five days every month in a fishing vessel based out of Burin, searching for animals and collecting oceanographic information. These surveys are also used as a comparison for what they might hear on the acoustic monitors.

Winston Pitcher of Burin owns the 62-foot vessel that’s taken Lawson and his team out for the last couple of years. Pitcher fished every summer during high school before graduating from the nautical science program at the Marine Institute in 1995. He’s fished fulltime ever since.

Pitcher did his first project with DFO in 2015 and says it was a great opportunity for the crew to get extra work beyond the regular fishing season. It also went a long way towards building a relationship and a mutual respect between industry and science.

“As a harvester, my relationship before with DFO science was always about debating quotas, but these projects are about monitoring and hopefully maintaining a healthy ecosystem, which in turn, should sustain our fisheries in the future.”

“With all the commercial activity and future plans for expansion, it’s important to see the impact, or non-impact, it will have in the future,” Pitcher adds.

Lawson agrees that it’s a great collaboration. “He fishes whatever he needs to keep his enterprise going, so he’s interested in many different species. Winston has sent me cell phone videos of a whelk pot with a leatherback turtle caught in it and what they did to disentangle it. That’s been used to educate other fishers and I now know better how sea turtles interact with whelk gear and where.”

Lawson adds, “We’re always talking to fish harvesters because they’re the guys on the water all the time.”

While they’re doing the visual surveys, they also do tows at different points, looking at plankton and water chemistry as well as stopping at defined points to measure ocean features like temperature and depth. This data collection is part of the overlapping projects in the baseline programme that are building a profile of what the ocean is like, as Lawson puts it, “as it comes up from the bottom to the top.”

This data collection is also helping Lawson in his research.

If he hears something on a recorder, it may not tell him about how far away that animal is because, in very noisy environments, sound will be masked or, in certain salinity and temperatures, sound will transmit for shorter distances. The data is needed to know how far away a whale has to be from the recorder to receive its call, since the data tells him the sound speed and the way the sound energy is likely to move.

Lisa Noble is the regional coordinator of the MEQ programme. She says all the data takes a long time to process but it can be very rewarding.

“The first time Lawson’s group did the processing of MEQ sound data in Placentia Bay, they heard a North Atlantic right whale. That was a rare surprise to everyone because they’re normally further south.”

Recently, right whales have been showing up in the Gulf of St. Lawrence because the copepods they feed on are less abundant further south.

Noble talks about how much information, time and energy has gone into the North Atlantic right whale in the last few years in terms of ship slowdowns and other mitigations in the Gulf of St. Lawrence.

“It has a real impact on different industries, even the fishing industry,” she says, and notes that they don’t yet know the exact impact noise has on the marine mammals in Placentia Bay. “A lot of the data we’re collecting will be very useful to a lot of people, not just science but industry as well. The more you know, the better.”

Like Lawson, Noble has been fascinated by marine biology ever since she was a child. “Everyone loves marine mammals. You can never learn everything. It’s so broad, there are so many species, and even within those species, there are differences. Every day is different.”

Noble spends most of her time behind a desk, but knows that what she does is still important. “I’m just fascinated with the ocean, all parts of the ocean and how it all fits together, which is exactly what this project is: trying to incorporate all the different data sources, including sound, ocean and aerial surveys. Everything. It’s pretty exciting to be contributing to something like this.”

Lawson attributes the success of the marine mammal research group to the fact that they’re figuring out the potential effects of noise before there’s more of it in areas like Placentia Bay.

“It’s like Wayne Gretzky used to say: ‘I’m skating to where the puck is going, not where it is.’ As a group, we’re thinking about what factors are influencing where these animals are, how successful they are and what might impact on them. We’re trying to ensure these animals stay around for future Canadians.”

No Replies to "Under the Surface: Ocean Noise and its Effect on Marine Life"