Fishing with artificial lights is one of the most advanced and successful methods to increase catch rates in recreational and commercial fishing operations.

It has a well-documented history in many parts of the world, including Africa, China, Indonesia, Japan, Korea, Malaysia, New Zealand, Philippines, Peru, Russia, Thailand, Turkey and Vietnam.

Historically, it started with simple techniques such as burning a large bonfire on the beach to attract fish. Fishermen and their family members would silently enter the water, encircle the illuminated zone with a net, and drag the net to the shore to harvest the fish. This was common in places, such as Cameroon, Indonesia and Australia, until the middle of the 20th century.

The next development was the use of mobile torches made from coconut husk and split bamboo. Fishermen would wade into the water in the dark of night to attract fish, which they would then stun and capture with a basket or spear. 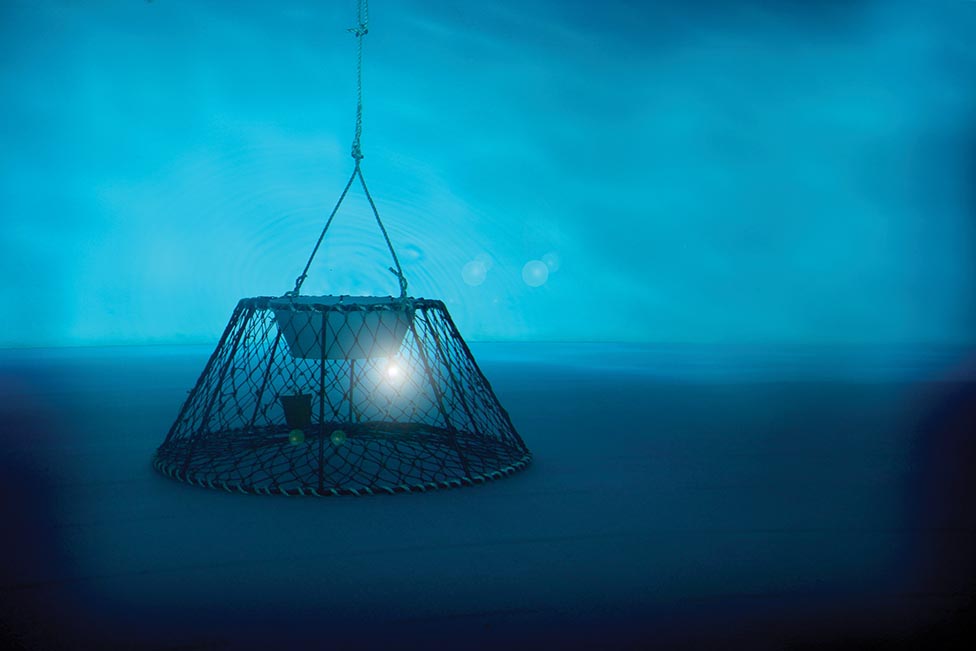 The earliest known use of underwater lights to catch fish was by Okinawan immigrant fishermen to harvest tunas in the 1920s in Hawaii. Today, the largest known application of underwater lights are the tuna and swordfish longline fisheries which use disposable lightsticks to attract fish to baited hooks. However, the advent of low-powered LED technology is beginning to change the landscape. 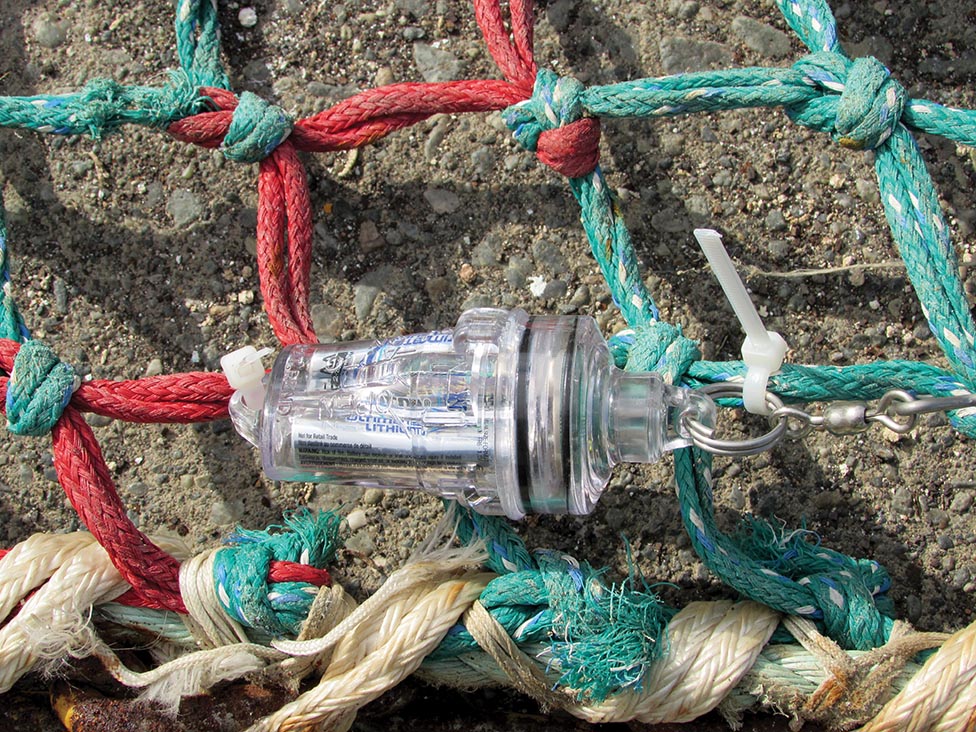 Today, these small hand-held lights are used commercially across a range of fisheries and gear types.

The desire to protect endangered and threatened species as well as the recent change in landing obligations in the European Union have driven a remarkable increase in research initiatives globally related to the use of underwater lights in fishing operations.

The ICES-FAO Working Group on Fishing Technology and Fish Behaviour (WGFTFB) has dedicated a significant effort toward the documentation and dissemination of this research.

There are a number of benefits of underwater light, including:

Increased Catch Rate — Most harvesters and scientists agree that the catch rate of tuna and swordfish increases when chemical lightsticks are attached to the branch lines of a pelagic longline system. Recent research has also shown that baited pots/traps equipped with underwater lights can yield higher catch rates for species such as Atlantic cod, snow crab and Northern shrimp.

Conversely, the challenges of underwater light include: 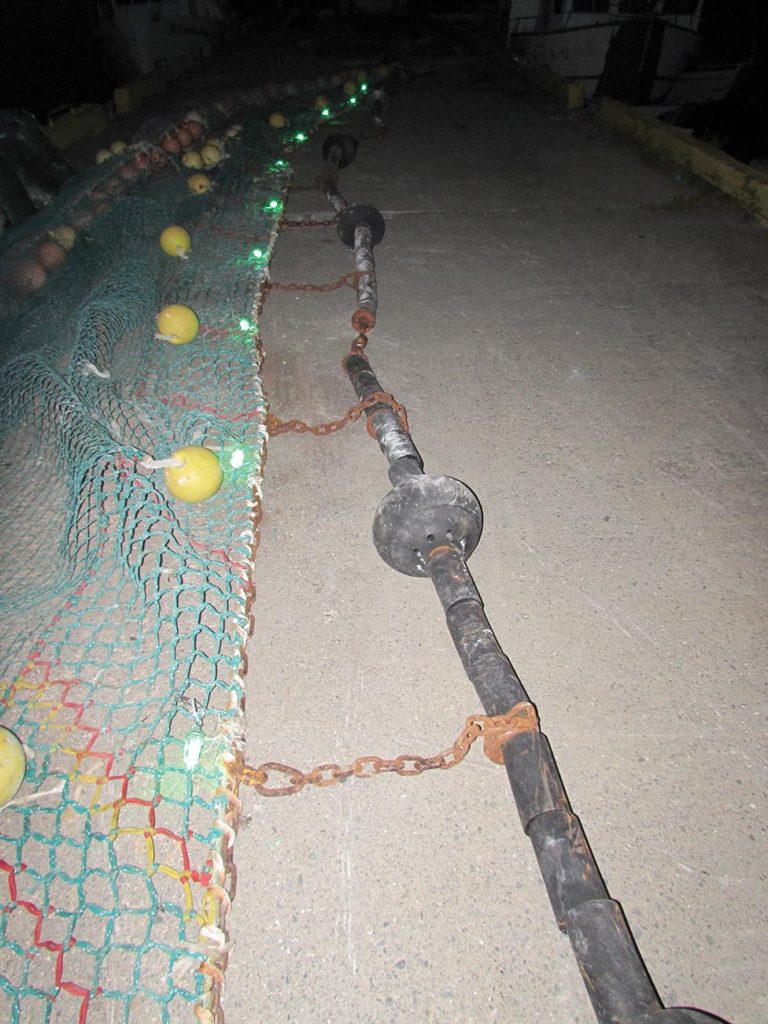 Increased Bycatch — While underwater lights have been shown to reduce bycatch in certain fisheries, they have also been known to produce new and unique challenges in other fisheries. In longline fisheries, for example, chemical lightsticks play an important role in attracting target species (i.e., swordfish, tuna), but they also produce a significant source of stimulus for non-target species (i.e., sea turtles, sharks and mammals). Evidence has shown that non-targeted animals can be injured and sometimes killed because of negative interactions with pelagic longlines equipped with lightsticks. Scientists speculate that lightsticks may simulate bioluminescent gelatinous prey, increasing the attraction of sea turtles to the baited hooks.

Plastic and Litter — Discarded chemical lightsticks is the largest source of plastic waste from underwater fishing lights. After a single day of operation, lightsticks are often discarded at sea, constituting a potential toxicant to marine flora and fauna. They contain oxalate ester, a fluorescer, a peroxide and a catalyst. These chemicals can sting and burn eyes, irritate and sting skin, and can burn the mouth and throat if ingested. Unfortunately, statistics do not exist at the present time for the global production of marine plastics associated with underwater lights.

Greenhouse Gas — The production of underwater lights inevitably produces greenhouse gas. It’s been estimated that 1 kg of polyethylene (PE) plastic produces about 6 kg of CO2 in the production process. Roughly speaking, this means a single small low-powered LED light weighing 57.6 g will produce approximately 345.6 g of CO2 to be manufactured. This means that equipping 1.2 million snow crab traps in Newfoundland and Labrador, for example, could produce about 414.7 tonnes of CO2.

A longer version of this article was recently published in the journal, Reviews in Fisheries Science and Aquaculture. Please contact the authors at the Marine Institute to receive a complimentary copy.

No Replies to "Using Underwater Light in Commercial Fishing Applications"