What’s in a Number?

The number 111 is an interesting one.

Tolkien’s hobbits call it eleventy-one and it’s how tall in feet the Statue of Liberty stands. It’s also the emergency number you dial if you’re in New Zealand.

The number 111 also holds significance for DFO shellfish technician Darlene Fiander. It’s the number of days she spent at sea in 2015. If you strung all of her trips together, it would be like spending January 1 to April 21 on the water.

“If I’d listened to my mother’s advice I’d have never stepped on a boat,” says Fiander, who is originally from Hermitage. She can remember playing down by the water as a child in a spot called the landwash. “She worries about me when I’m out at sea.”

Last year, she had 11 trips in total, some inshore in places like Fortune Bay and St. Mary’s Bay and some offshore, working on deep-sea surveys. 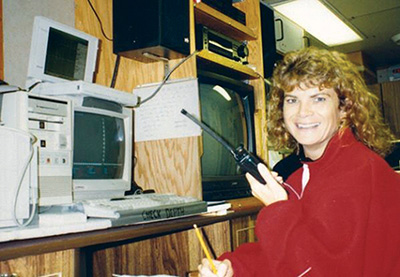 For the first nine years of Fiander’s 35-year career, her mother didn’t have to worry about her. She didn’t start working on the water until 1990.

Fiander started at DFO in 1981 with a background in data entry. She would key in the data that staff were bringing back from their surveys.

“In 1990, DFO decided that as technologies change they would like to key the data right there on the boat,” she says. “At the time, I was the most senior one in the shop and they wanted someone who could key fast and be accurate.”

Fiander remembers her first trip very well. “It was in 1990 and it was on a boat out of Nova Scotia named the Lady Hammond. We were out on an offshore crab survey. As it was my first sea trip I think the biggest challenge was that I didn’t have sea legs and I was trying to keep up right and to keep my stomach back down where it belongs.” Besides the lack of sea legs, she says, “It was so exciting.”

Prior to having the benefit of a data entry person onboard, they were still taking the data old school. “We used to record everything on paper and we would bring it back into the shop (Northwest Atlantic Fisheries Centre) and then we’d be busy keying the data that was sampled and captured out on the water.”

Internet and global connectivity have changed how they work. “The data entry is all done onboard now, and then a couple of times during the trip the b’ys send it back to the lab or they can work on the data as it’s being been caught and being recorded.” 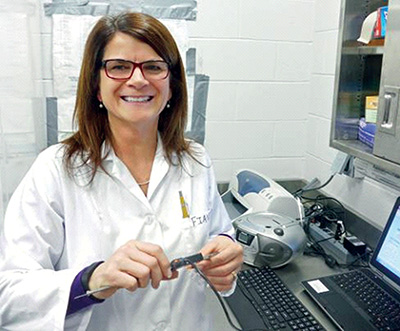 Today, Fiander is a shellfish technician. She not only samples crab, shrimp and scallop but also does multi-species trips on science research vessels that take samples of various species from the ocean floor.

“While on board the research vessel, we identify the species, take lengths and weights, determine whether we have male or female and figure out what stages of maturity they’re at. We record the lengths and their maturity,” she says, “For crab we measure them, we call the shell condition and we look for bitter crab disease.”

She gets to see a variety of fish when they are trawling the oceans depths. “You might get a chimera (ghost shark) or you might get a wolffish (sea wolf), some spiny tail skate, or fish like the viper fish.”

Sometimes they bring up non-fish items. “We brought up a cup and saucer and what we used to call when we were children, a piece of a vanity, like a comb and a piece of the mirror.” Could that be something that the Little Mermaid dropped?

Her favorite survey is the scallop. “With scallops we’re on deck more. We’re right there when that catch drops out on deck,” she says, “You’re on your hands and knees and you’re picking here and there. It’s also the time of the year. It’s August into September so it’s nicer weather.”

Fiander says there are some challenges to a job on the water.

“There are many hours in the lab where it’s cold and it’s wet. It can sometimes be uncomfortable. And just being on a boat — the adverse weather conditions and the overall continuous movement of the boat — but you learn to live with that.”

There are also personal things that she has learned to live with over her years at sea. “You’re away from home. You miss some important events. I’ve missed the first day of school from my son for probably five or six of his elementary years.”

“I find after so many years at this, it just becomes like it’s a part of you,” Fiander says of her sea legs, “You’re not falling around as much. If you watch someone who comes aboard and they’re new you can tell they haven’t been to sea.”

And when you get back in from days, weeks, or even months on a boat, the challenge becomes getting your land legs. “That can be worse than going out,” Fiander says, “Because when you step off the boat, especially if you’ve been at sea for two weeks in rough weather, when you come down the gangway and you stand on the wharf, you’re still moving.”

What she likes most about her work at sea is “being out there with people that you work with in the office, you learn more things about people that you didn’t really know. Out there you’re like a small community,” Fiander says, “You know what I mean? When you’re out there, everybody is around the table in the mess, they’re sitting around and chatting, so it’s the camaraderie.”

The most satisfying part of her work is, “when you’re at the meetings and you see they’re talking about the data that you collected and you’re seeing your work being used.”

So the number 111 has another distinction. It is the greatest number of days that a woman from the DFO Newfoundland and Labrador Region has spent at sea in a one-year period. Sometimes it pays not to listen to your mother.

No Replies to "What’s in a Number?"