Where the Buoys Are

Dan Frampton’s favourite quote about the sea is from William Shedd who said, “A ship is safe in harbour, but that’s not what ships are for.”

Frampton, from St. John’s, first learned what ships were for as a young boy.

“In my early years from age nine until 15, I sailed pretty well all the coast of Newfoundland and not having the physical strength to do the cargo work, often times I was steering the ship along the coast with my father as navigator.”

He has worked at the Canadian Coast Guard (CCG) for more than 36 years.

Today, Frampton is one of two supervisors of operations, aids to navigation, for Atlantic Region CCG. “Basically, all the floating aids and lights that flash around the coast come under my responsibility.”

While he does not recall seeing his first buoy or even asking questions about them, he remembers they were always there bobbing around on the sea.

“Sometimes it wasn’t so much asking a question about buoys as it became evident we were going through a channel and there were buoys on either side and you assumed they were marking the best passage.” 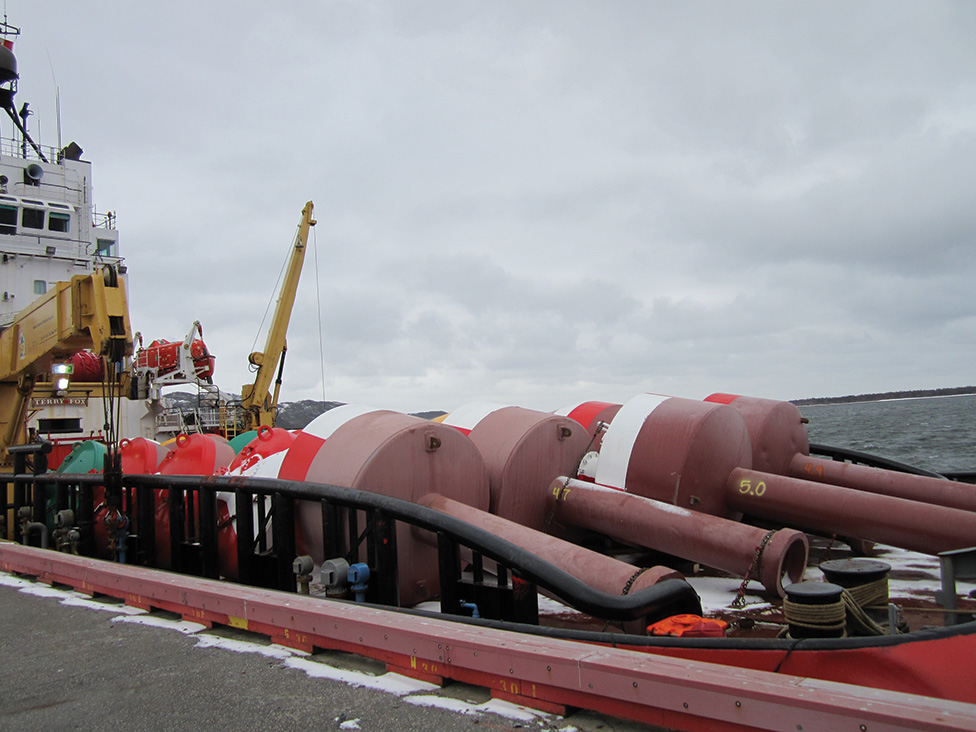 Frampton continues marking the best passages for mariners in Newfoundland and Labrador. “We determine what the need is based on a lot of things; everything from the client, to the traffic in the area, the visibility, to the policies and directives which we follow.”

In the early 1800s, there was no standard system for buoys and their shapes, colours and sizes would vary from port to port. This allowed individuals to decide what to plunk down and where.

The mariners’ main complaint was the buoys were so tiny, that to see them you had to run over them. Of course they were small — they had to depend on small boats to place the buoys or worse yet, unwieldy sailing ships with limited steering.

Today, CCG manages over 5,000 floating aids to navigation in the Atlantic region. Long gone are the days of simply plunking them down — instead, buoys are precisely placed using graphs, charts, calculations, and input from local mariners to determine the safest configuration for each area.

There’s a meticulous plan to mark the safest channel, similar to how street signs and red lights are placed on land.

When you compare the two, there is one huge difference. “A buoy is like a stop sign or like a traffic light that can move,” says Frampton. “Not only can the light go out, but the pole the light is on can shift.” Therefore, like a driver on a roadway, mariners have a responsibility to be aware of changing conditions and to proceed on their route with due caution and care.

Meanwhile, job one for the Coast Guard’s aids to navigation team is ensuring the thousands of floating aids under its responsibility are in place and that they stay in place.

With weather, ice, and wind conditions, that might sound like an insurmountable task. Now imagine if you also had to contend with the shifting of a sandy seabed, carried and moved about by water, the currents, ice and winter conditions and vessel movement.

This is called channel siltation, which Claire MacLaren, born and raised on Prince Edward Island, describes as “the breakdown and movement of sediment, which causes shifting of sand, creates sandbars, and changes the boundaries of the channels.” 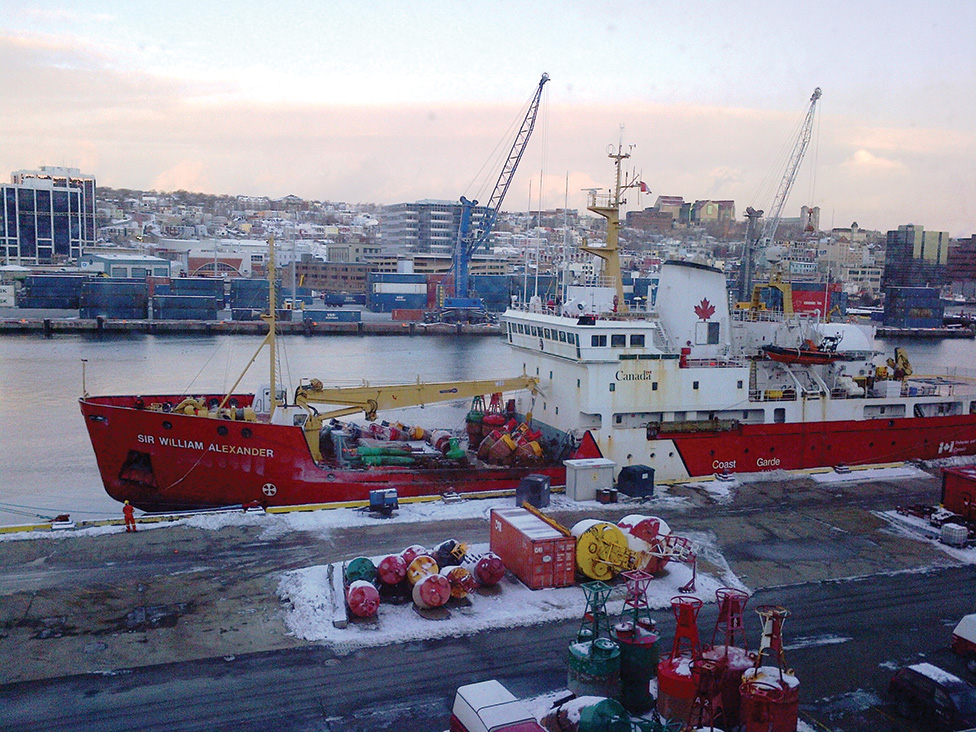 A crane lifts buoys onto CCGS Sir William Alexander from the yard at the St. John’s base.

“Channel siltation is very common in areas of the Maritimes,” says MacLaren, who has worked for the Canadian Coast Guard for 28 years and is also a supervisor of operations, aids to navigation, for Atlantic Region CCG, “in particular on the north side of Prince Edward Island and the eastern shore of New Brunswick.”

This is a situation where a buoy could be here today and following a big storm, over there tomorrow.

How do they keep up on this ever-changing situation?

MacLaren says they depend on the Coast Guard fleet, the local buoy contractors and reports from the marine public with local knowledge. Then comes the task of coming up with a plan to place or reposition the buoys.

“Design and review officers determine the positioning of the buoys based on nautical charts, sounding surveys, and local knowledge.”

Because there is no telling if channel siltation is going to happen every year, or a couple of times a year, or if it will happen at all, it illustrates a point that Dan Frampton feels the seafaring public has to remember. “A buoy is an aid to navigation. It can shift and not be where it’s supposed to be.”

“You have a responsibility to be prudent in your navigation. If the aid is there, you make sure that it’s there, great. It’s something that gives you a safe margin.”

While the job has many challenges, MacLaren and Frampton both love their work and describe it as a busy environment with each day bringing something different and interesting.

And you’ll never change the people who work for the Canadian Coast Guard whose number one priority is safety at sea.

All mariners have a role to play in ensuring safe waterways. If you see a navigational aid out of place or not working, please contact the Canadian Coast Guard with this information. The phone number to call is 1-800-563-9089.

No Replies to "Where the Buoys Are"