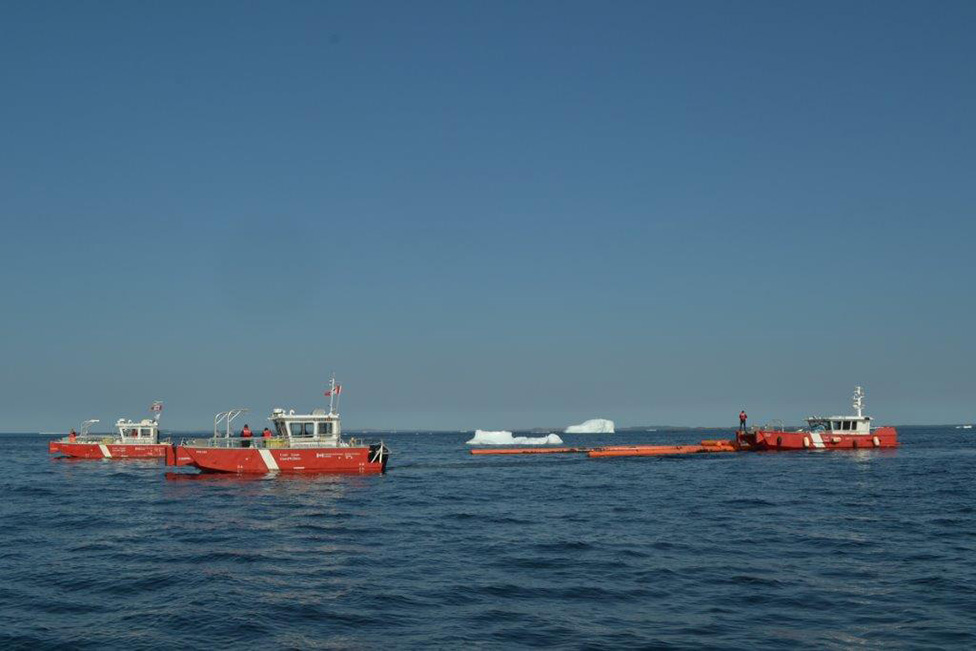 Working Together to Protect the Ocean From Marine Pollution

All Canadians, particularly those who work on the water or live along our coasts, know that healthy oceans and shorelines are important to the economic, physical, and cultural well being of our country. Activities such as fishing, oil and gas exploration and development, transportation of cargo, tourism, and recreation are essential to our daily activities and livelihoods, but make the ocean a busy place.

With all this marine activity, it is important that everyone takes responsibility for protecting our ocean ecosystems and the creatures that live there. One of the most important ways we can do this is to prevent marine pollution incidents. But when they do occur, the response must be comprehensive and quick.

In Canada, the polluter is always responsible for cleaning-up and covering the costs of any marine pollution incident. This includes a ship owner and insurer.

Through its Environmental Response (ER) program, CCG monitors or manages the clean-up efforts for any ship-source or mystery-source pollution incident in Canadian waters to ensure an appropriate response. It’s CCG’s mission to minimize any impacts of marine pollution on public safety, the environment and the economy.

When the polluter is known, willing, and able to respond to the incident, the CCG will advise the polluter of its responsibilities and review the polluter’s clean-up plans, and monitor the clean-up. When the polluter is unknown, or is known but unable or unwilling to respond to the incident, the CCG will assume the overall management and clean-up of the incident.
CCG can seek compensation from a vessel owner or their insurer for costs incurred when managing or responding to a marine pollution incident, as legally, they are fully liable for any pollution damage and the costs associated with response measures. However, there are times when, for various reasons, compensation for costs cannot be collected.

The polluter may be unknown, or unwilling to respond. In this case the CCG may seek compensation from the Ship-source Oil Pollution Fund (SOPF) which was established to free taxpayers from covering the cost of a marine pollution incident.

In addition to the SOPF, the Canadian Government tried to minimize the expense to Canadians and to ensure comprehensive pollution response through the creation of a network of private sector oil spill response organizations. Funded and operated by the private sector, these organizations maintain a minimum response capability for oil spills of up to 10,000 tonnes in Canadian waters south of 60 degrees north latitude.

All oil tankers of 150 tonnes gross tonnage, all other vessels of 400 tonnes gross tonnage trading in Canadian waters, and oil handling facilities must have an arrangement with a response organization before carrying out activities in Canadian waters. When these private sector organizations clean up a pollution incident, the Canadian Coast Guard monitors the operations to ensure that the clean-up meets Canadian standards.

In Newfoundland and Labrador, the Manolis-L case provides a good example of what happens when a polluter is unable to clean up its pollution.

In 1985, after hitting the treacherous Blowhard Rocks, the Manolis-L sank in Notre Dame Bay. In March 2013, the Coast Guard received its first report of small oil sheens from the wreck on the water near Change Islands and Fogo Island.

With the polluter no longer present, CCG assumed the overall management of the incident. In doing so, its environmental response group has successfully completed oil containment operations including underwater hull surveys, sealing leaks with weighted seals and deploying cofferdams. This effective monitoring regime continues on a regular basis.

In the case of the Manolis-L, CCG received the first report of an oil sheen from a member of the public. Ideally an incident is recognized and reported by the polluter themselves as soon as possible, but if the polluter is not aware or is not present, CCG often relies on the public to report the presence of pollution in our waters.

Mariners, pilots and everyone who uses our oceans play an important role in reporting marine pollution. CCG relies on all Canadians to do their part to protect our oceans. Marine pollution incidents can be reported to the CCG’s Environmental Response program by calling the environmental emergencies phone lines (1-800-563-9089 in Newfoundland, or 1-800-565-1633 in other marine areas of Maritimes), or via VHF channel 16.

The CCG’s networks of Marine Communications and Traffic Services Centres (MCTS) across the country monitor VHF and the environmental emergencies phone lines to ensure environmental response activities take place as soon as they are reported.

When an oil spill or other pollution is reported, the MCTS officer calls the ER Duty Officer. These individuals are on standby 24 hours a day, 365 days a year. When a call back number is left, the Duty Officer will communicate directly with the individual who made the report to determine the extent of the pollution. 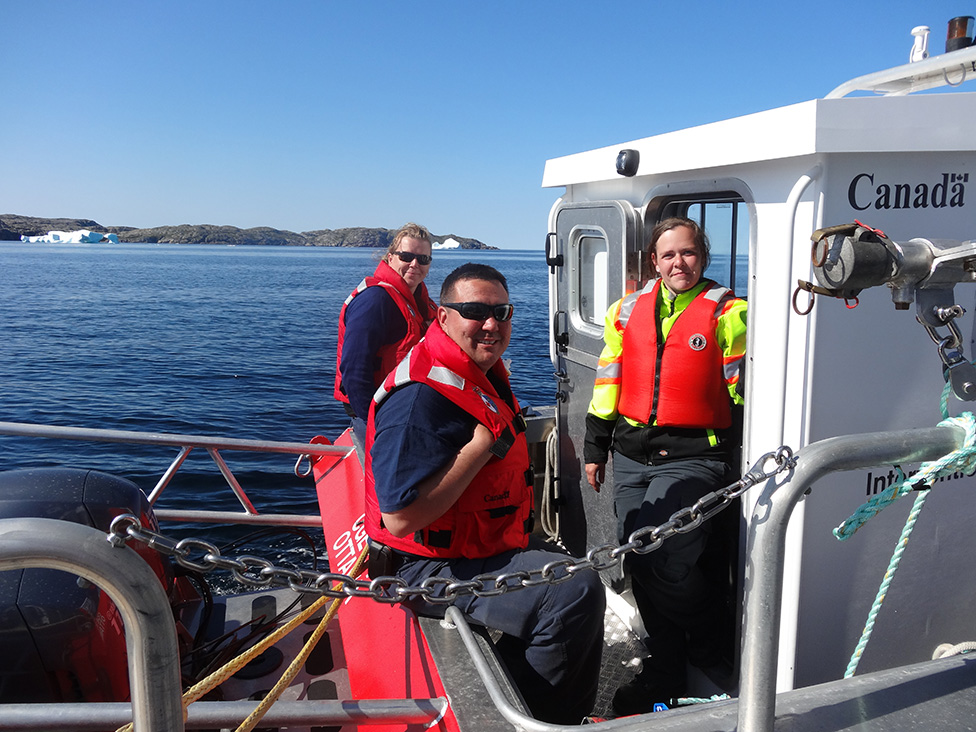 Assessing the potential threat of pollution is vital to ensuring the right resources respond. Detailed information is gathered such as the size of the vessel, how much and what kind of fuel or other pollutants are on board, who the polluter is (if known), and what are their intentions. This helps ER prepare and act appropriately and quickly.

It is important to recognize that every response incident is different and accurate information is essential. Information such as the colour and consistency of a pollutant can tell the ER specialist a lot about the severity of the spill. For example, a rainbow coloured sheen on surface water; means there is likely only a small amount of oil. If the pollutant is thick, black or dark brown, this indicates there may be a significant amount of oil spilled.

Oil on the water, under different weather environments (windy, hot, and cold) will behave differently. For example, under calm sea conditions one litre of oil can spread to a thin area the size of a football field.

These variables determine the type of response and equipment used: a large spill may require an absorbent boom that can trap and soak up pollution on the surface of the water where wave action alone might disperse a smaller spill. New technologies and methods for managing oil spills are always being developed and the Canadian Coast Guard is always striving to improve on effective emergency response.

CCG is always prepared to respond to environmental incidents wherever and whenever they may occur. Contingency plans have been developed to respond to all incidents under all conditions; they have considered multiple sea conditions, various temperatures, wind direction and other geographic sensitivities that could affect the methods and approaches to cleaning up pollution.
Environment Canada supports these plans by providing environmental sensitivity maps and videos to describe the environmental conditions of every Canadian coastline. This gives ER the knowledge to plan the appropriate response strategy specific to an area.

Regardless of the pollution incident, CCG is prepared to manage the response to remove it from the environment quickly and efficiently to ensure public safety and protection of the marine environment for future generations.

We all have a role to play in protecting our oceans, and we urge the public to report any pollution as soon as possible to the Environmental Emergencies phone lines in Newfoundland and Labrador at 1-800-563-9089, in other Atlantic waters at 1-800-565-1633, or via VHF Channel 16.

CETA-Related Dispute Drags On: Newfoundland Government Announces It Will Not Drop MPRs