You Can’t Fix It

La Scie, Newfoundland native Corey Starkes is a changed man since the accident in 2009.

As captain of his dad’s 65-foot fishing vessel, Seafaring Legend, Corey was enjoying a good life. But in the early morning hours of October 24, everything changed and as much as he wishes, he can’t change it back to the way it was before that day.

A week earlier, Corey, along with crewmen Scott Drover and Chad Sheppard, had steamed from La Scie, across Notre Dame Bay, to Twillingate to pick up ice before heading to the shrimp grounds to spend four or five days fishing. The plan was to return to Twillingate to sell their catch.

A third crewmember, Max Pittman, who was cook on the Seafaring Legend, drove from his home in Elliston, Bonavista Bay and joined Corey and the guys in Twillingate.

The weather forecast wasn’t good, so they remained in Twillingate for an extra day before getting away.

It was late in the season and fishing was slow in mid-October. After four days, they had managed to catch about a half load of shrimp. Located 170 miles northeast of La Scie with approximately 50,000 pounds of shrimp in the fish hold and word of bad weather approaching, it was time to head back to Twillingate on October 23. 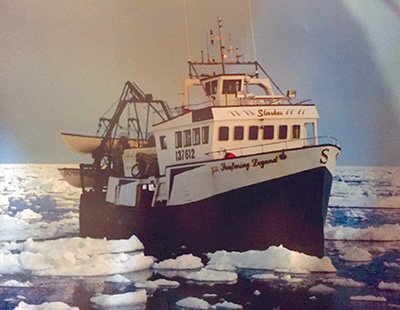 Seafaring Legend on a sealing trip.

With only a half load of fish in the hold, Corey decided to “fish” part of the way in by slowing the vessel to about 1.6 knots and shooting the net over the stern and tow for a couple of hours, or as long as there were shrimp going into the mouth of the net, but all the while keeping on course toward Twillingate.

The weather forecast said rough or at least “uncomfortable” weather was on the way and the skipper didn’t want to get caught offshore in a late October storm.

Corey was on watch after supper and he remembers how most of the evening progressed. Between regular wheelhouse duties, he was trying to call his older brother Craig in Fort McMurray, Alberta.

“It was Craig’s birthday and I wanted to get a hold of him to poke a bit of fun at him about getting old, being over the hill and all that ol’ stuff, but I was having trouble getting a satellite signal or whatever,” Corey laughs.

He did manage to make one call that evening though.

He talked to his father, Allan Starkes, back home in La Scie. After discussing the low catch rates and late October weather conditions, the two men decided that after unloading their catch in Twillingate, it would be prudent to steam the vessel to Triton, about midway back home to La Scie and have some year-end, winterizing, maintenance work done.

When that work was completed, they would decide whether it was worthwhile to try one last trip for the season or call it quits.

At 7 p.m., winds were about 20 – 25 knots, but getting steadily stronger. A little later, the men took back the net for the last time and Corey increased the speed to eight knots. Scottie took over on watch and Corey headed to the bunk for a nap.

As captain, Corey always slept in short shifts — two or three times a day whenever convenient while fishing, but during their steam home, he’d try and get a good sleep for eight hours if possible while the crew took turns in the wheelhouse. But there was no eight-hour sleep in store for Corey Starkes that night.

His first call came at midnight. Scottie called him to help pump water from the engine room caused my melting ice. While pumping the water, Corey noticed the winds had increased to about 35 knots and seas were getting rougher so he reduced speed to between five and six knots and then went back to the bunk.

A few hours later, Max, who had relieved Scottie on watch, woke Corey to inform him the radar and other electronic equipment wasn’t working and it seemed the generator was not functioning properly.

Corey went to the engine room to check it out and sure enough, the generator was not even running. Corey was mystified. There was no apparent reason for the generator failure so he finally went back to the wheelhouse for another look and this time he noticed the key in the electrical panel was in the off position. Corey turned the key to on and the generator started operating again. Corey gave Max some good-natured ribbing about having kicked the generator key, shutting it off.

“Sometimes when the boat would take a serious roll in a big wave, whoever is in the (captain’s) chair would put one foot on the dash to brace himself and sometimes your boot would accidently hit the generator key on the panel and turn it to the off position, so I figured that might have been what happened but everything was fine now so we had a laugh and that was it,” Corey explains.

Corey smiles now when he relates that story and continues to speak glowingly about Max, his long-time cook and shipmate.

Meanwhile, Corey stayed in the wheelhouse for more than a half hour because it takes that long before the electronic devices recalibrate and reboot. He needed to make sure the computer and radar was working properly and likewise the large outside lights and other equipment because they were still several hours from Twillingate and with moderate to high seas and fairly strong winds in late October, anything can suddenly happen to require all the resources available.

When Corey was in the engine room checking on the generator, he noticed a small amount of water on the floor so while he waited for the electronics to reboot, he decided to pump it out and while he was at it, he and Max pumped out the fish hold as well. Finally, it was time to go back to the bunk for what he hoped would be an uninterrupted sleep for several hours.

But sleep would be elusive that night.

Corey had finally slipped into a deep sleep, but less than an hour into his third nap of the night/morning he was awakened again. This time it was Chad calling out to him from the wheelhouse.

“My room was in the wheelhouse, at the back, only a few feet away from the chair and I could hear Chad singing out, calling my name. He was telling me to get up, that something was wrong.”

Trying to get focused from his deep sleep, Corey couldn’t make sense of was happening to him for a few moments.

“I couldn’t get my legs out over the bunk. My bunk was on the port side, long-ways, from head to stern and I remember thinking that something is not right but I tried again and still couldn’t get out and finally, after a third try I rolled out and realized I wasn’t lying on the floor but more on the port wall. I finally managed to get up opened the door to the wheelhouse.

“Something wrong?” replied Corey rhetorically, noticing water about eight inches up on the port side windows; “there more than something wrong by’; she’s gone!”

Join us next month for Part II of You Can’t Fix It.

No Replies to "You Can't Fix It"