You Say Crustacean, I Say Lobster

Besides tasting great with a bit of butter, they’re very interesting. To some people, they look like a huge insect. In fact, they’ve been called the cockroach of the sea. And — get this — they taste with their legs and chew with their stomachs.

They can walk backwards or forwards. Really, they should work with Cirque du Soleil. 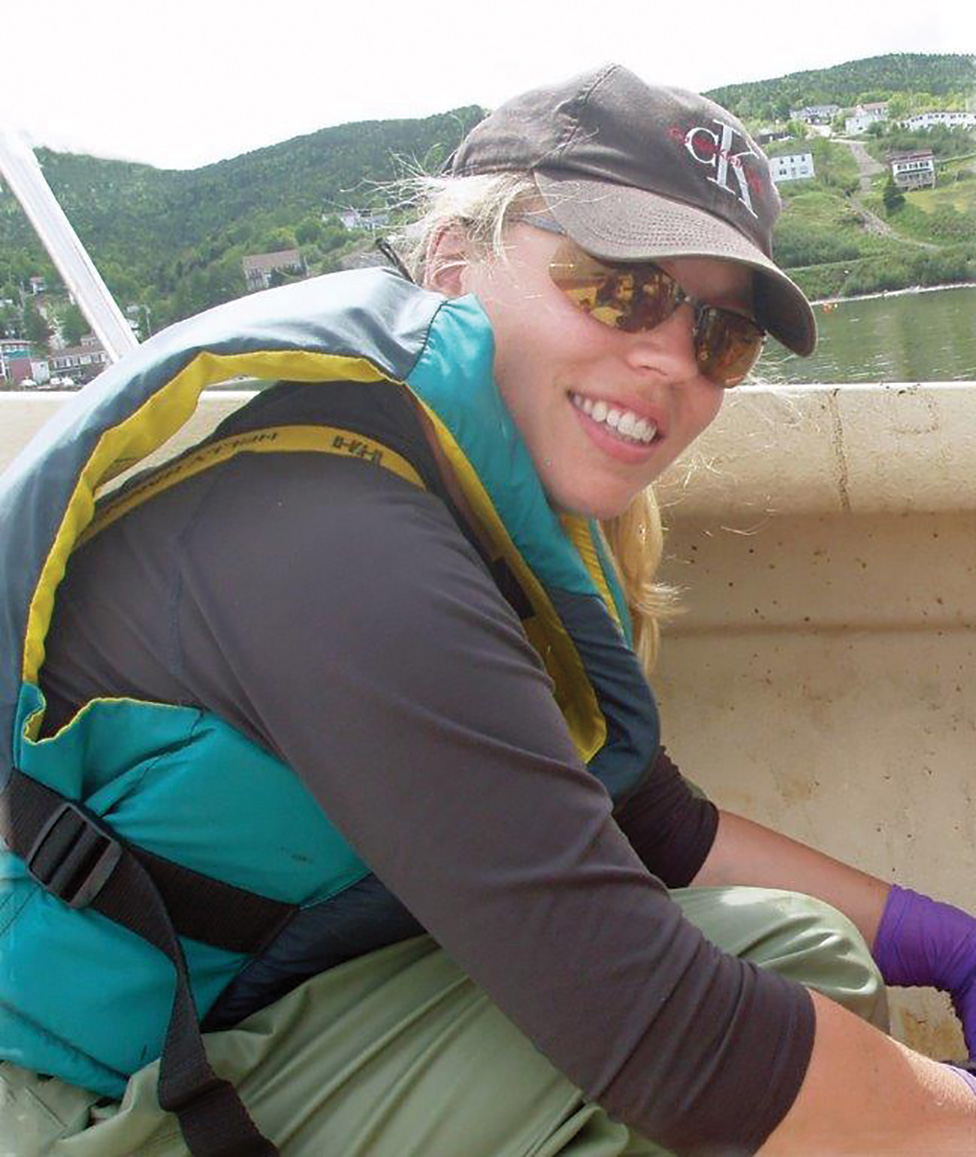 Once considered “the poor man’s chicken,” they have since become a highly-valued delicacy.

Lobsters can be right-handed, left-handed, or ambidextrous.

“It’s certainly an interesting critter to work with,” says Elizabeth Coughlan, originally from the Goulds, Newfoundland and Labrador.

She has worked as a biologist with Fisheries and Oceans Canada (DFO) N.L. Region since 2006. She studied marine environmental technology at the Marine Institute and eventually completed a Bachelor’s Degree and Masters of Science (Environmental Science) Degree at Memorial University with a focus on fisheries science. She worked with Habitat Protection in the Ecosystems Management sector during her first six years at DFO.

“While working with Habitat Protection, I spent a lot of time working on the protection of coastal lobster habitats,” says Coughlan.

“I started working as a stock assessment biologist with the shellfish section and specifically started working on lobster,” she says. “They’re an interesting species to work with and an important resource to a lot of communities throughout Newfoundland and Labrador.”

DFO has studied this reclusive lobster for many years, but still, there are questions that remain unanswered.

“Lobster are almost mysterious in some regards. For example, in Newfoundland and Labrador, where juvenile lobsters hide or settle has remained a mystery.”

However, recent findings during a coastal dive survey by DFO Science staff discovered juvenile lobster in their nursery grounds. “This isn’t a regular occurrence to come across these species within their nursery grounds. At times, they are almost too good at hiding,” says Coughlan. “We are planning to conduct more research in this particular localized area and hope to answer more questions about the mysterious baby lobster.” 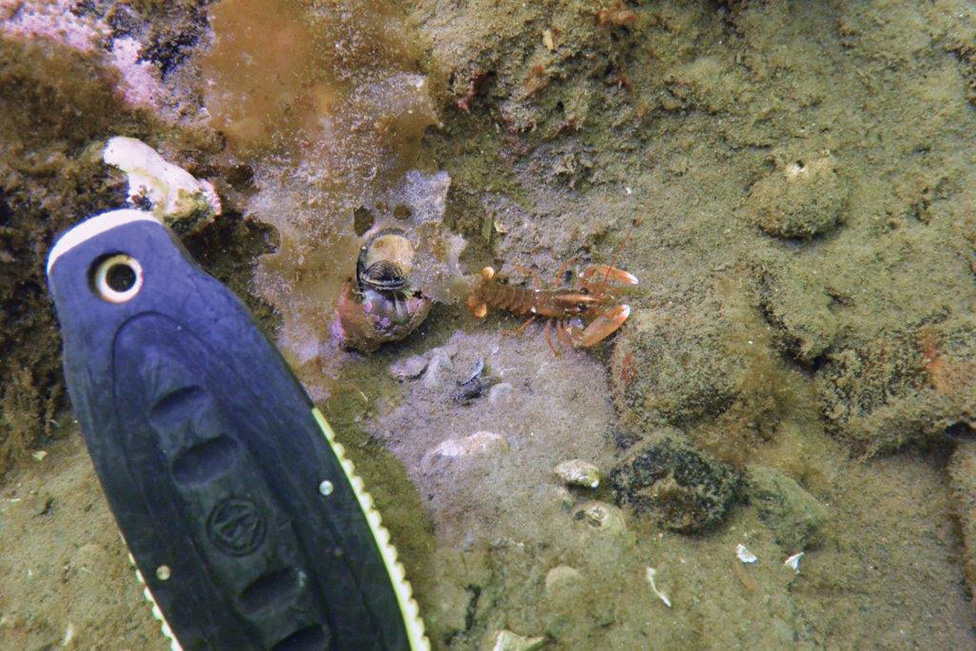 While lobsters can hide — in their habitat — they can’t run from DFO’s assessments of the stock. There are a few ways to collect data about these furtive crustaceans.

“We work with fishers and ‘at-sea samplers’ through the Fish, Food and Allied Workers Union (FFAW), who work hard to collect information throughout the lobster fishing season,” says Coughlan. “The at-sea samplers collect data that includes a carapace length measurement, sex, and reproductive and V-notching status of all lobster that are caught daily.”

Coughlan explains V-notching: “V-notching means cutting a shallow notch in the lobster’s tail fan when egg-bearing females are caught,” says Coughlan. “The intent of V-notching is to identify lobsters capable of reproduction.”

If a V-notched lobster is caught, it must be thrown back to reproduce. A V-notch will remain on the tail for up to two moults, so this ensures they reproduce at least one more time.

At-sea sampling data is used to determine population structure by looking at the lobster’s survivability. “We want to know how many are surviving beyond fishable legal size,” says Coughlan, “and how many undersized juvenile lobster are in the system.”

Approximately 2,500 lobster licences and fishers’ logbooks are issued throughout Newfoundland and Labrador. “We are highly dependent on fishers’ logbooks, which gives us details about the fishery performance,” says Coughlan. “In the last couple of years, the percentage of logbook returns has been low.”

Coughlan does not sit idle as she waits for lobster logbooks to flood her office, but she remembers a scientific survey she participated in recently in Bonavista Bay. “Every day we saw whales, dolphins and the water was alive. It’s great when you can work and enjoy the amazing beauty the ocean has to offer. This may sound corny but it’s true.”

“I also find it rewarding when I get the opportunity to visit communities and the fishermen,” Coughlan says. “I have a high respect for the work that they do.”

She just wishes more fishers would send in the logbooks. 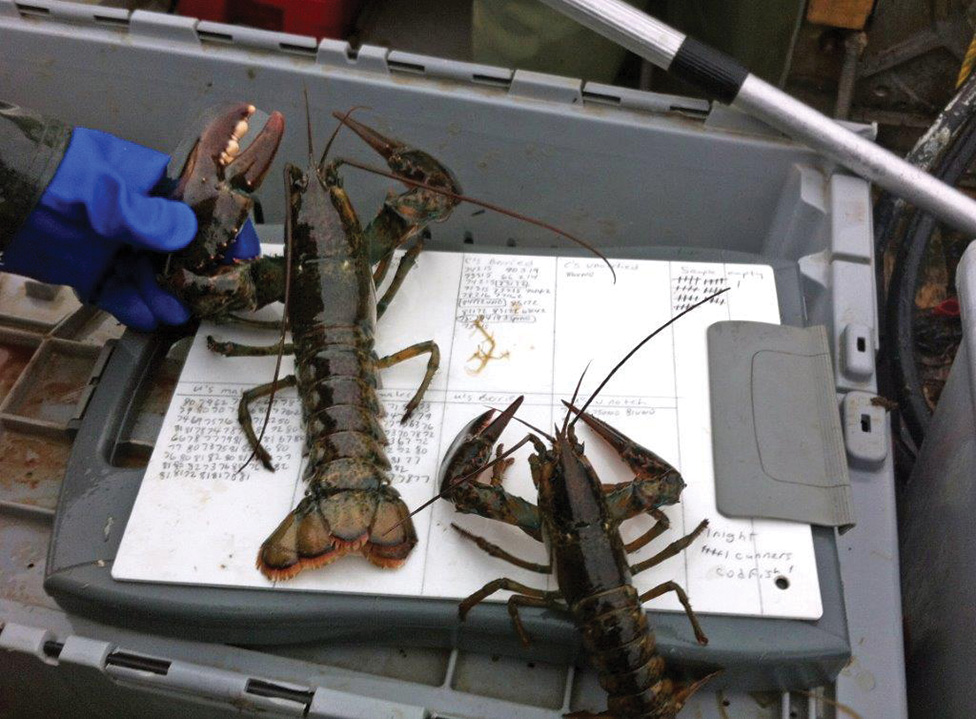 Lobsters on the survey

“I know that this resource is fished by many people in the province and their livelihoods depend on it. I recall one particular fisher I met with when I went back to have a cup of tea in his shed,” she says. “There were two logbooks sitting there which he filled out daily.” She realizes that keeping a logbook in harsh weather conditions is not easy. Yet many do.

“Some fishers are really accountable, but we just need to get the rates up. We need to get the message out there that this information is valuable to the stock assessment and that we are not just throwing them in a box and putting them aside.”

The returned logbooks are valuable to assess the fishery to make sure it’s sustainable, viable and healthy. This is why Coughlan implores fishers to “Tell us what your daily catch is, because the thing with the lobster fishery is there seems to be a lot of local sales and accurate logbooks are an important tool to account for catch size, which helps us to estimate the health of local lobster populations.”

Considering how important a healthy lobster industry is to so many Newfoundland communities, Coughlan believes the more we can learn about these fascinating, sometimes-ambidextrous water bugs, the better off our coastal communities will be for present and future generations.

Up From the Ashes: Bay de Verde Plant Set to Re-Open This Spring

No Replies to "You Say Crustacean, I Say Lobster"